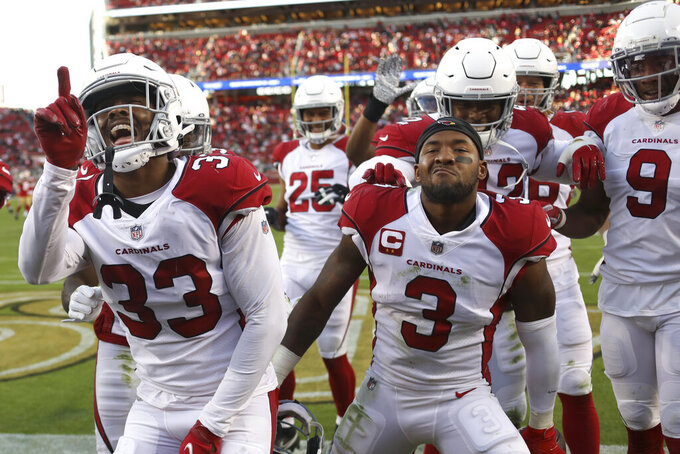 GLENDALE, Ariz. (AP) — Vance Joseph thinks it's great the Arizona Cardinals have an 8-1 record, which is tops in the NFL.

The defensive coordinator has also been around long enough to know it doesn't mean much as the calendar moves to November and December.

“The good teams in this league in the second half of the year, they don't stay the same,” Joseph said. “They adjust before they have to adjust. Does that make sense? Because the good teams understand that it's going to get harder every week. Teams have two months of film on you.”

That film will show that the Cardinals have been one of the NFL's best through nine games on both offense and defense. They'll try to continue those trends against the Carolina Panthers (4-5) on Sunday.

Those two haven't practiced this week either, calling into question their status against the Panthers. If Murray can't play, veteran backup Colt McCoy showed he can handle the offense, completing 22 of 26 passes for 247 yards and a touchdown in his first start of the season.

The Panthers are desperately trying to stay in the playoff hunt after losing five of their past six games. Carolina made big news Thursday by signing veteran quarterback Cam Newton to a one-year deal, but it's unclear if the 2015 Most Valuable Player will be able to help by Sunday.

Second-year quarterback P.J. Walker will likely get a chance to lead the Panthers on Sunday with Sam Darnold out at least four weeks with a shoulder injury.

It might be Walker's only opportunity to make a good impression: The Panthers probably aren't paying Newton up to $10 million to sit on the sideline.

Walker was 1-0 as a fill-in starter last season, but threw two interceptions in the red zone.

Walker played for Panthers coach Matt Rhule at Temple and then signed with the Panthers after a successful stint in the XFL, where he was the league’s top player before it was shut down amid the coronavirus pandemic.

He may need more than juice. Walker inherits an offense that has scored just one touchdown in its last 36 possessions.

Linebacker Markus Golden has emerged as arguably the best player on the Cardinals defense and his blue-collar personality is widely respected by teammates.

The 30-year-old veteran — known by the nickname “Junk” — leads the team with nine sacks this season. He has helped the Cardinals keep a consistent pass rush despite losing three-time NFL Defensive Player of the Year J.J. Watt, who is likely done for the season with a shoulder injury.

Golden has spent 5 1/2 of his seven NFL seasons with Arizona. He signed with the New York Giants in 2019, but by the middle of 2020, the Cardinals wanted him back enough that they traded for him.

McCaffrey still managed to gain 106 yards from scrimmage despite his limited role. But expect his number of snaps to increase as the weeks go on, beginning on Sunday.

The best offseason acquisition by the Cardinals might have been signing running back James Conner, who is tied for the NFL's lead in rushing touchdowns with 10.

Conner has consistently found the end zone despite splitting time in the backfield with Chase Edmonds. The 26-year-old has scored his 10 TDs despite running for a relatively modest 454 yards.

That might change against the Panthers: Edmonds (ankle) doesn't look like he'll play Sunday, which means Conner will likely get the majority of the carries. Some of the workload could also go to Eno Benjamin, who scored his first career touchdown last weekend against the 49ers on a spectacular 21-yard run.

The Panthers tried right tackle Taylor Moton at left tackle earlier this season, but they don’t like the idea of weakening two positions by moving him to that side. Instead, Rhule is expected to start Dennis Daley at left tackle and Pat Elflein at center. Carolina has surrendered 25 sacks this season and the Cardinals will likely be looking to bring the pressure.