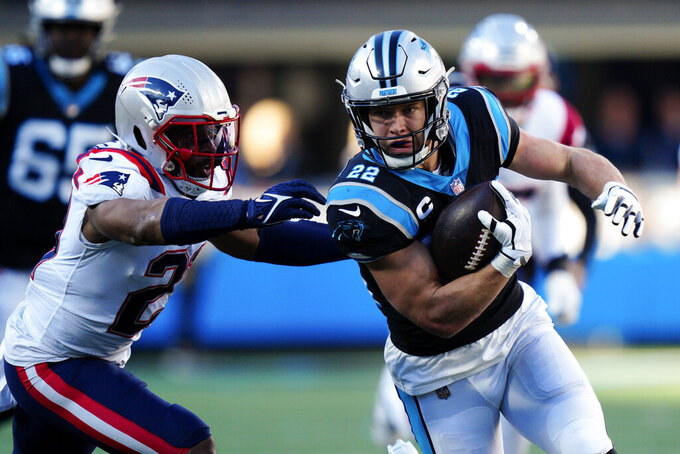 BETTING LINE: Cardinals by 10 1/2, according to FanDuel SportsBook.

TURNOVER DIFFERENTIAL: Panthers minus-5; Cardinals plus-8.

PANTHERS PLAYER TO WATCH: OLB Haason Reddick. Reddick had 12 ½ sacks for the Cardinals last season and his production hasn’t waned since joining the Panthers as an unrestricted free agent on a one-year, $6 million deal. Reddick leads the Panthers with 8 ½ sacks, which rank tied for sixth in the league. He’s been the team’s most consistent defensive player and is always a threat for make a big play.

CARDINALS PLAYER TO WATCH: RB James Conner. He's tied for the NFL lead with 10 rushing touchdowns this season and his bruising style has been perfect for the Cardinals since he signed with the team during the offseason. Conner's role could be even bigger on Sunday considering the team's other main running back Chase Edmonds is likely sidelined with an ankle injury.

KEY MATCHUP: Cardinals pass rush vs. Panthers QB P.J. Walker. Arizona has been among the NFL's best defensive teams this season and one big reason is the pass rush. The Cardinals have been led by linebacker Markus Golden and edge rusher Chandler Jones, who have combined for 15 sacks. They'll try to make life hard on Walker, who is making his second career start.

KEY INJURIES: Walker gets the start in place of Sam Darnold at quarterback. Walker is 1-0 as an NFL starter but has thrown just one touchdown pass and five interceptions during his career. ... Carolina added former star quarterback Cam Newton on Thursday. His status is uncertain for Sunday. ... The Panthers will also be without two key starters on the offensive line in center Matt Paradis and left tackle Cam Erving (calf). Paradis is out for the season with a torn ACL. ... Panthers coach Matt Rhule said he will likely make a game-time decision on the status of defensive end Brian Burns (ankle). ... Arizona QB Kyler Murray (ankle) and WR DeAndre Hopkins (hamstring) didn't play last week. Coach Kliff Kingsbury says both are “day to day” going into this game. ... Edmonds (ankle) is likely out for the Carolina game and possibly longer. ... The Cardinals hope WR A.J. Green (reserve/COVID-19 list) could play on Sunday. ... S Budda Baker is dealing with concussion and knee issues, while rookie WR Rondale Moore is also dealing with a concussion/neck injury ... OLs Justin Pugh (calf) and Max Garcia (Achilles tendon) are nursing injuries.

SERIES NOTES: Carolina has a five-game winning streak against the Cardinals and all of the wins were by at least 10 points. Two of them were in the postseason. ... Arizona's last win in the series was at home in 2013.

STATS AND STUFF: The Panthers have lost five of their last six games. ... Carolina has scored just one touchdown in its last 36 possessions. ... RB Christian McCaffrey returned to action last week after missing five games with a hamstring injury and had 106 yards from scrimmage. ... The Panthers have allowed 25 sacks, tied for sixth most in the NFL. ... WR Robby Anderson has been targeted 53 times but has just 19 catches. ... Panthers TEs Ian Thomas and Tommy Tremble have combined for just 21 receptions. ... Panthers K Zane Gonzalez has made 12 straight field goals, the longest streak in the NFC. ... DE Brian Burns has 5 ½ sacks. ... The Panthers have allowed seven TD passes of 15 yards or more. ... Arizona is trying to improve to 9-1, which would tie a franchise best set in 2014 and 1948. ... If Murray plays, he needs 31 yards passing to become the fourth-youngest QB in NFL history with 10,000 career yards passing. ... Golden is the only player in the NFL with at least nine sacks, four forced fumbles and two fumble recoveries in the NFL this season. ... The Cardinals have scored at least 30 points and gained at least 400 yards in five games, which leads the league. They Cardinals are scoring 30.8 points per game, second in the league behind Tampa Bay.

FANTASY TIP: If you're in a deep league, Cardinals RB Eno Benjamin might be worth a look. He's still available in many leagues and could see an increased role if Edmonds can't play. His spectacular 21-yard touchdown run against the 49ers is evidence that he can contribute.