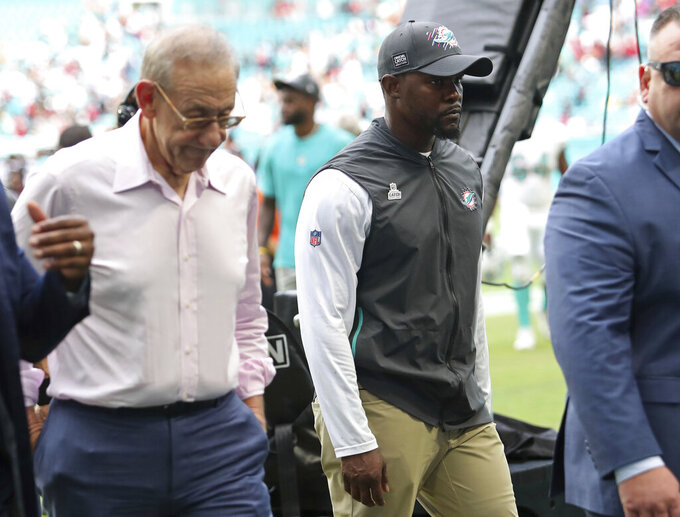 FILE - Miami Dolphins owner Stephen Ross, left, walks off the field next to coach Brian Flores after the team's loss to the Atlanta Falcons in an NFL football game Oct. 24, 2021, in Miami Gardens, Fla. Fired Dolphins coach Flores sued the NFL and three teams Tuesday, Feb. 1, over alleged racist hiring practices for coaches and general managers, saying the league remains “rife with racism” even as it publicly condemns it. According to the lawsuit, Ross told Flores he would pay him $100,000 for every loss during the coach’s first season because he wanted the club to “tank” so it could get the draft’s top pick. Messages left with the Dolphins seeking comment were not immediately returned. (John McCall/South Florida Sun-Sentinel via AP, File)

NFL Commissioner Roger Goodell told teams Saturday the league will look to bolster policies meant to encourage hiring of minorities, particularly as head coaches, and he pledged an investigation into tanking allegations raised by Brian Flores in his discrimination lawsuit against the NFL.

“We will reevaluate and examine all policies, guidelines and initiatives relating to diversity, equity and inclusion, including as they relate to gender,” Goodell wrote in a memo to the league's 32 clubs that was obtained by The Associated Press.

The commissioner added that the league's record on hiring minority coaches has been “unacceptable.”

The memo came five days after Flores sued the league and three teams over alleged racist hiring practices for coaches and general managers, saying the league remains “rife with racism” even as it publicly condemns it.

The NFL's main avenue for increasing diversity in its leadership ranks is the two-decade-old Rooney Rule, which requires teams to interview minority candidates for jobs including head coach and general manager. Despite the rule, there is currently one Black head coach in the league: Pittsburgh's Mike Tomlin. There are no Black team owners, just a handful of Black GMs and relatively few Black coordinators in a league where more than 70% of players are Black or another ethnic minority.

Goodell said the league will include outside experts in its review along with "current and former players and coaches, advocates and other authorities in this area. Our goal is simple: make our efforts and those of the clubs more effective so that real and tangible results will be achieved.”

In a statement, Flores' attorneys said while Goodell's memo appears to be a positive first step in confronting systemic racism in the league, they “suspect that is it more of a public relations ploy than real commitment to change.”

Flores, who is Black, was fired as Miami's coach last month despite back-to-back winning seasons. He named the league and three teams — the Dolphins, Denver Broncos and New York Giants — in a class-action lawsuit this week alleging unfair hiring practices in the NFL.

After the lawsuit was filed, the league said it would defend itself against claims it said were “without merit.” The Dolphins, Broncos and Giants also denied Flores' allegations.

Goodell took a softer approach to Flores' claims in his memo.

“We understand the concerns expressed by Coach Flores and others this week. While the legal process moves forward, we will not wait to reassess and modify our strategies to ensure that they are consistent with our values and longstanding commitment to diversity, equity and inclusion,” the commissioner wrote.

Flores' most serious allegation is his claim that Dolphins owner Stephen Ross told him he would pay him $100,000 for every loss during the coach’s first season because the owner wanted the club to “tank” so it could get the top draft pick. The Dolphins went 5-11 that year; the Cincinnati Bengals went 2-14 and used the No. 1 pick on quarterback Joe Burrow, who led the team to this season's Super Bowl.

“We also take seriously any issue relating to the integrity of NFL games,” Goodell’s letter said. “These matters will be reviewed thoroughly and independently. We expect that these independent experts will receive full cooperation from everyone associated with the league or any member club as this work proceeds.”

Ross pledged his team's full cooperation into an investigation on Thursday when he labeled Flores' accusations “false, malicious and defamatory.”

Flores also contended that the Broncos and Giants conducted sham interviews, Denver’s in 2019 and New York’s during the current hiring cycle. Critics of the Rooney Rule have long contended that many teams complied with the rule by interviewing minority candidates they had no intention of hiring.

“There's a lot of work to do. I wish there was a quick fix. I wish there was a silver bullet for some of these things,” Jacksonville Jaguars owner Shad Khan, who is Pakistani-American, said Saturday. “But I think it says as much about America, frankly, as it does anything else.”

The Jaguars had two interviews with Tampa Bay offensive coordinator Byron Leftwich, who is Black, for their head coaching job, but talks with him broke down and Jacksonville hired Doug Pederson, the fifth white coach Khan has hired in as many opportunities as owner of the Jaguars.

Lawyers Douglas H. Wigdor and John Elefterakis, who represent Flores, said they were skeptical that Goodell's memo would lead to meaningful changes and called on a court or government agency to appoint a federal monitor to oversee the league.

“For too many years, the NFL has hidden behind the cover of foundations that were supposed to protect the rights of Black players and coaches, as well as law firms and experts that purport to be unbiased an independent but are paid for by the NFL," the attorneys said in their statement. “All the while, systemic racial bias has festered in the NFL's front offices.”