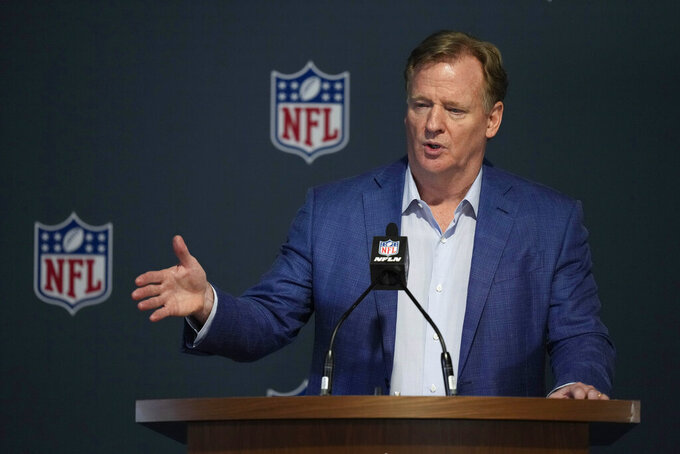 FILE -NFL Commissioner Roger Goodell answers questions from reporters at a press conference following the close of the NFL owner's meeting, Tuesday, March 29, 2022, at The Breakers resort in Palm Beach, Fla. The NFL has expanded the Rooney Rule again, this time to include quarterbacks coaches in a further effort to diversify the coaching ranks. The change was announced Tuesday, May 24, 2022 at the owners meeting in Atlanta. (AP Photo/Rebecca Blackwell, File)

The NFL has expanded the Rooney Rule again, this time to include quarterbacks coaches in a further effort to diversify the coaching ranks.

The change was announced Tuesday at the owners meeting in Atlanta by Jonathan Beane, the NFL’s senior vice president and chief diversity and inclusion officer. The oft-criticized Rooney Rule, adopted in 2003 to enhance opportunities for minorities to gain head coaching jobs and enhanced several times to include front office positions, now will requires one minority or female candidate from another team to be interviewed for quarterbacks coach. Previously, the rule covered head coach, general manager and all coordinator jobs.

Such current head coaches as Zac Taylor of the Bengals, Kyle Shanahan of the 49ers, and Brian Daboll of the Giants have advanced from QB coach to the top spot.

In March, the owners approved for this season that all 32 clubs must employ a female or a member of an ethnic or racial minority to serve as an offensive assistant coach. The person will receive a one-year contract and work closely with the head coach and offensive staff to gain experience.

Commissioner Roger Goodell said at the end of the meetings that the league's investigation into accusations of sexual misconduct by now-Cleveland quarterback Deshaun Watson is close to a conclusion. He did not provide a timeline on any decision or potential discipline for Watson, who is facing civil lawsuit from 22 women.

An additional change made Tuesday forbids teams from hiring a new head coach until after the wild-card playoff round, Goodell said. Teams can't conduct head coach interviews with candidates from other NFL teams until the third day after the season ends — if the candidate's team is not in the playoffs. For potential hires who are in wild-card round games, there will be a two-day hiatus following their game before interviews.

Significantly, teams can't hold in-person head coach interviews with anyone working for another team until after all wild-card games. But interviews with in-house candidates or those not working in the NFL are allowed before the wild-card round.

The idea is to provide more preparation time for interviews.

Goodell said he was not aware of an upsurge in ownership discontent with Washington Commanders owner Daniel Snyder despite reports that several teams are in favor of a suspension if recent claims of financial improprieties by the franchise are accurate. The Commanders are being investigated.

The owners also discussed possibly dropping the Pro Bowl or totally revamping it.

“What we tried to lay out is what we are talking to the players association and many players about: what works and doesn’t work,” Goodell said. "The conclusion was the game itself doesn’t work and we needed to find a different way to celebrate our players, these being our Pro Bowl players and best players in our league.

“We talked a lot about some of the events around the Pro Bowl are extremely popular. Things we will build on.”

Earlier, Indianapolis was awarded the next two NFL scouting combines. The city has staged the winter event since 1987 for players entering the draft.

Indianapolis was granted hosting rights for the 2023 and 2024 combines. This was the first time the NFL put the combine up for bidding, with Dallas and Los Angeles also seeking to host.

“Indy’s vision brings together its long legacy of successfully hosting the combine and executing the evaluation process, with an exciting focus on innovating and further growing the event from a fan and media perspective,” said Peter O’Reilly, NFL executive vice president of club business and league events.

“Indy is a city built to host major sporting events, and I’m proud the combine will continue to stay in our city,” Colts owner Jim Irsay said.

Studies showed that the 2022 combine generated an estimated $9.6 million in economic impact for the city.

Irsay and his family plan a new legacy program focused on mental health and designed to benefit Indianapolis residents as well.

The league also announced four new international home marketing areas, with the Super Bowl champion Los Angeles Rams adding New Zealand and the Philadelphia Eagles granted Australia, New Zealand and Ghana, making them the first NFL franchise to enter a market in Africa. The Eagles and Rams can activate in their newly awarded markets on June 1.

The expanded program, launched in January, now includes 19 teams granted access to 30 international areas across 10 countries. Each team has access to international territories for marketing, fan engagement and commercialization as the NFL seeks to become more global.