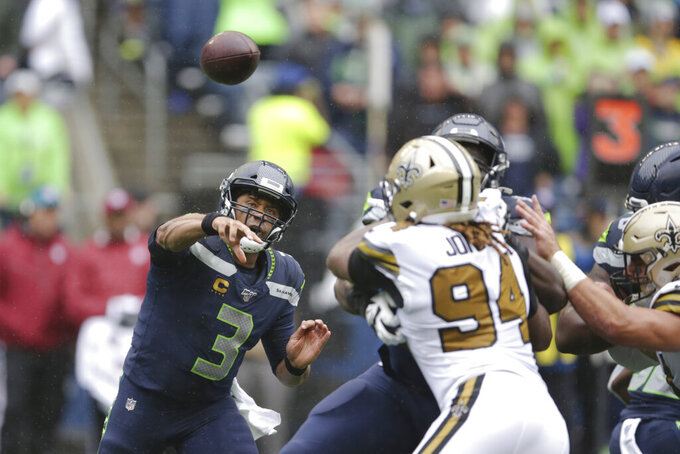 SEATTLE (AP) — Teddy Bridgewater wanted to stay composed. He wanted to remain calm and in control while taking over for the next several weeks with the New Orleans Saints' leader, Drew Brees, sidelined with injury.

But emotions can often be tricky to control. And in the moments before making his first meaningful start since the 2015 playoffs, they all hit Bridgewater.

"I was thinking about the process from the time I was injured up until now and just thinking about all the ones who believed in me and just being back on this stage," Bridgewater said.

Three years removed from a knee injury that nearly ended his career, Bridgewater was an unexpected winner Sunday. He threw two touchdown passes in his first start with Brees out, watched his teammates add TDs on defense and special teams and help lead the Saints to a 33-27 win over the Seattle Seahawks.

The narrative entering the week centered on whether the Super Bowl hopes of the Saints (2-1) were lost with Brees out following surgery to repair a ligament near his right thumb. The week ended with Bridgewater throwing his hat into the stands as he ran off the field following his first win as a starting quarterback since Jan. 3, 2016, the final week of the 2015 season.

"I said all week Teddy is a leader," Saints running back Alvin Kamara said. "He had composure. He had poise and we got it done."

Bridgewater had started Week 17 last season, but that was a meaningless game. The Saints had their playoff seed wrapped up. Sunday had significance and Bridgewater relished his opportunity.

"You never want to take the game for granted," Bridgewater said. "I think last year what happened, we had the playoff spot locked up. To come into a game like today that has more meaning was one of those games where your emotions are high because the game has meaning and you haven't experienced this in a long time."

Bridgewater threw a 29-yard touchdown to Kamara late in the first half on a screen pass where the talented running back bounced off several tacklers on his way to the end zone. He added a 1-yard TD toss to Michael Thomas on fourth-and-goal on the first possession of the second half, a drive kept alive by an illegal formation penalty against Seattle on a missed field goal attempt.

But the key for New Orleans was a pair of first-half touchdowns with Bridgewater standing on the sideline.

Deonte Harris took a punt back 53 yards for a score in the first quarter, and Vonn Bell picked up Chris Carson's third lost fumble in three games, and returned it 33 yards for a TD in the second quarter.

The two non-offensive touchdowns for New Orleans, plus Seattle's numerous miscues took pressure off Bridgewater. He didn't need to win the game. He simply needed to avoid his own errors, which he did. He got the ball in the hands of his playmakers, Kamara mostly, and didn't take unnecessary risks. Bridgewater completed 19 of 27 passes for 177 yards.

Kamara had nine catches for 92 yards and added another 69 yards rushing.

"He's like a human joystick," Bridgewater said. "You get him the ball he's spinning, he's juking, he's bouncing off of guys."

The Saints took advantage of Seattle's sloppiness and handed the Seahawks (2-1) their first home loss in the month of September under Pete Carroll. Seattle had been 15-0 at home in September since 2010. The first loss will sting after Seattle gave gifts to the Saints all day, whether it was turnovers, untimely penalties, terrible tackling or costly clock management. It was an equation of errors by Seattle that was too much to overcome.

"Just had a really hard time getting out of our own way," Carroll said.

Payton won for the first time in his career without Brees as his quarterback. It was a limited sample size of just three previous games and a stat Payton joked as being "silly" afterward.

"That sells papers. I got it," Payton cracked.

Russell Wilson threw an 8-yard TD to Tyler Lockett in the first half and ran for a pair of touchdowns in the fourth quarter. His 2-yard TD run early in the fourth pulled Seattle within 27-14. New Orleans went three-and-out on its next drive, but Seattle couldn't convert on fourth-and-1 deep in its own end and Kamara scored on a 1-yard plunge for the capper. Wilson also missed Lockett on a fourth-down throw in the end zone in the third quarter.

Bridgewater was helped by Seattle's pass rush being unable to create consistent pressure. The debut of Jadeveon Clowney and Ziggy Ansah playing together on the defensive line yielded minimal results. Seattle had zero sacks, only two quarterback hits. While Bridgewater got rid of the ball quickly, he was comfortable in the pocket.

Seattle missed a chance to trim the deficit at the end of the first half because of poor clock management. Seattle took possession with 29 seconds left and two timeouts. The Seahawks chose not to use a timeout after a 9-yard completion to Dissly. Wilson took the next snap with 10 seconds left and after scrambling hit DK Metcalf for 54 yards to the Saints 16. Seattle attempted to call timeout, but officials said it came after the clock hit zero.

Saints: New Orleans returns home after two weeks on the road and faces Dallas next Sunday.