Offensive line woes costly for Bills in loss to Steelers 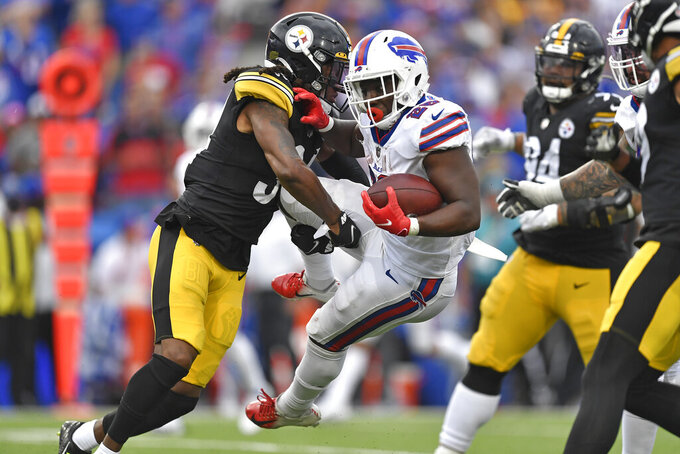 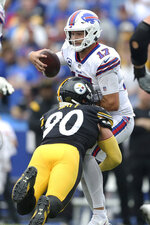 For all of the success the Buffalo Bills had on offense last season, their offensive line came up short when it mattered most in the AFC championship game.

The new season picked up right where they left off.

The Bills’ pass-happy attack never got off the ground in a 23-16 loss to the Pittsburgh Steelers on Sunday. The T.J. Watt-led pass rush attacked and harassed Josh Allen all game, making him uncomfortable and forcing him to leave the pocket and make throws on the move.

Pittsburgh finished with eight quarterback hits, including three sacks. One of those sacks was a strip-sack by Watt.

“Our quarterback was affected too many times,” Bills coach Sean McDermott said. “I give them credit, they’ve got a couple good players up there and they did a good job. I thought schematically they did a good job as well and overall we could’ve done a better job in terms of our one-on-one blocking both in the run and the pass game.”

The proof was in the penalties for Buffalo. The offensive line had six holding penalties (four were accepted), which halted the Bills from building any momentum on offense.

“We know we have a special guy, No. 17, back there, and it’s our job no matter what the play call is to keep him as clean as possible,” center Mitch Morse said.

Keeping the offensive line intact was a priority for the Bills this offseason. It was generally solid throughout Buffalo’s 2020 season before the end-of-season struggles against the Chiefs.

Right tackle Daryl Williams and guard Jon Feliciano were both set to become free agents, but Buffalo was able to keep both in the mix.

The right guard spot is one position in flux. After an extended training camp competition, both Cody Ford and Ike Boettger saw time against the Steelers, with Ford playing a majority of the second half.

Veteran Dion Dawkins, Buffalo’s franchise left tackle, had a game to forget against Pittsburgh. Dawkins had multiple holding penalties. The Bills don’t believe his preseason bout with the coronavirus was a contributing factor, however.

“I don’t think he was affected,” McDermott said. “That’s probably more of a direct question for him, but as far as I’m aware, he was not affected by the COVID yesterday.

"As I said, along with the entire offensive line I didn’t think we won our one-on-one matchups enough. There were times where we won those matchups, but not enough times and then at the same time, we have to help them out. It was a formidable group they were up against and we’ve got to do a better job of helping them out in those situations at times through our plan.”

Buffalo’s defense was flying around with a purpose after largely struggling last season. The defense allowed 16 points, with one Steelers touchdown coming off a blocked punt.

In a minor surprise, rookie DE Greg Rousseau received his first career start. The 30th overall pick exceeded early expectations throughout training camp, but was expected to work his way into the lineup on a rotational basis. He played 52 percent of Buffalo’s defensive snaps.

“All the things that we had seen in the preseason with his poise and control and not just getting overwhelmed was still evident yesterday,” defensive coordinator Leslie Frazier said.

Levi Wallace held off yet another challenge for his No. 2 cornerback job this offseason — his third challenge in as many years — but struggled against the Steelers. Ben Roethlisberger targeted Wallace more and more as the game progressed and Wallace had no answers.

21 — Josh Allen threw for 270 yards and a touchdown, but his 21 incompletions (30 of 51) matched the second-highest incompletion total of his career.

The Bills travel south to take on the division rival Miami Dolphins, who sit alone at the top of the AFC East following a 17-16 Week 1 win over New England.