Officially the worst: Bengals move on to top of the draft 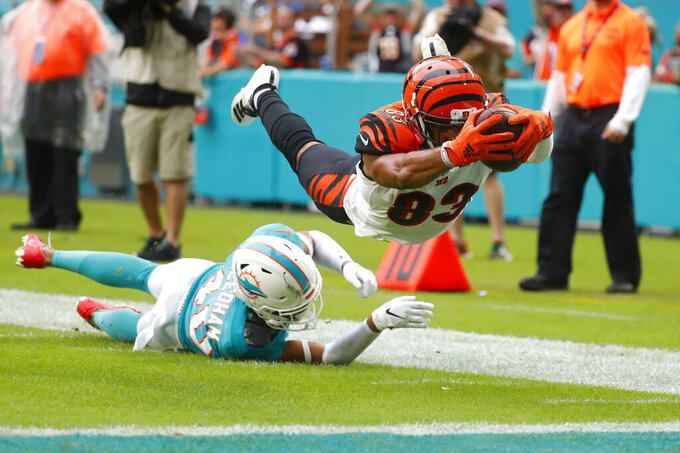 Cincinnati Bengals wide receiver Tyler Boyd (83) stretched for a touchdown as Miami Dolphins defensive back Nik Needham (40) is unable to defend, during the second half at an NFL football game, Sunday, Dec. 22, 2019, in Miami Gardens, Fla. (AP Photo/Wilfredo Lee)

CINCINNATI (AP) — The Bengals have secured the top pick in next year's draft. All that's left is a send-off for the quarterback who had a hand in their best — and most frustrating — moments in the past decade.

Andy Dalton gets to wrap up his tenure as the Bengals' franchise quarterback on Sunday when Cincinnati (1-14) hosts the Cleveland Browns (6-9). The Bengals are expected to take a quarterback in the draft — they'll get the first shot at Joe Burrow — and give Zac Taylor a chance to mold his offense heading into his second season as head coach.

Dalton has one year left on his contract. Even if the Bengals choose to keep him to mentor the rookie next season, his days leading the franchise are finished.

Dalton's last road start of the season provided a lot of smiles. The Bengals pulled off one of the most improbable comebacks in franchise history Sunday, scoring two touchdowns in the final 29 seconds in Miami to send the game to overtime.

Dalton spiked the boy joyously after his 2-point conversion run tied it 35-35 with no time left in regulation. He was all smiles as he came to the sideline, a rare moment of exhilaration. in a season that saw him benched for three games.

“The way the game had gone early on, to be in that position, it was a big relief,” Dalton said. “It was, ‘All right, we did it! Let's go win this game now.'”

They didn't, of course. Miami got a field goal in the final seconds of overtime for a 38-35 win that clinched the NFL's worst record — and its top draft pick — for the Bengals.

And now, there's only one more to go before the franchise looks for the next quarterback to lead it.

The only upside is the chance to be at the top of the draft order. The Bengals will have a chance to address their many trouble spots as they pick high in the rounds.

Everything except the kicking game. That's why they're picking first overall.

Dalton returned from a three-game benching and led the Bengals to their only win, 22-6 over the Jets on Dec. 1. He threw four second-half interceptions during a 34-13 loss to New England on Dec. 15 and had a horrid start in Miami, but showed flashes of his glory days while directing the comeback. Dalton led the Bengals to five straight playoff appearances from 2011-16, a franchise record, but couldn't get a playoff win.

The defense had shown significant improvement in the second half of the season, keeping games close. It gave up 502 yards in Miami, with Ryan Fitzpatrick throwing for 419 yards and four touchdowns.

The Bengals put receiver A.J. Green on injured Monday, opening a roster spot for the final game. They'd kept him active all season as he recovered from ankle surgery during training camp, but Green decided last week that he's not yet ready to play. Green is a free agent after the season and has warned that he won't participate in any offseason activities if the Bengals decided to use the franchise tag to keep him around for one more season. The Bengals filled his spot by claiming second-year linebacker Sharif Finch off waivers from Tennessee. Finch has started three games for the Titans.

— A season such as this has many defining statistics, but three stand out heading into the final game: 2, 26 and 47,096. It's only the second time in the club's 52-year history that it will win as few as two games. The 2002 team under Dick LeBeau went 2-14 to set the low-water mark. Also, it's the first time since 1993 — a 26-year span — that the Bengals failed to win even one road game in a season. And they can set a record-low attendance next Sunday against the Browns. They've averaged only 47,096 at Paul Brown Stadium, which opened in 2000. The stadium's all-time low heading into this season was 49,251 in 2011.

Try to beat a division rival for the first time since Sept. 9, 2018. The Bengals have lost 10 straight against AFC North teams since a 34-23 victory in Baltimore that opened last season.