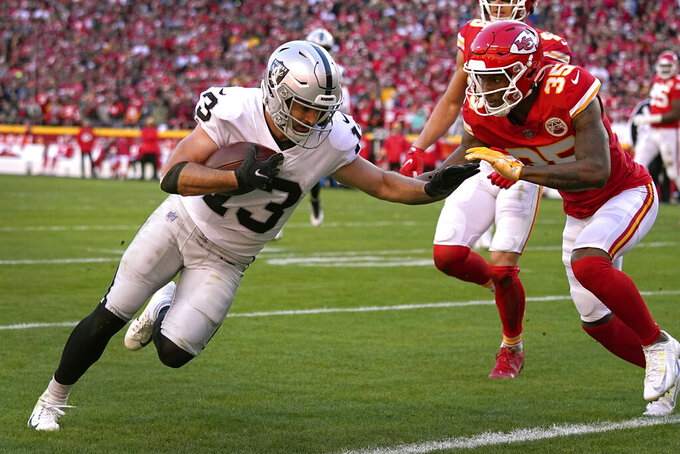 HENDERSON, Nev. (AP) — While plenty has gone wrong for the Las Vegas Raiders this season, receiver Hunter Renfrow stands out for getting so much right.

Renfrow leads the team with 86 receptions, tied for fifth-most in the league. He's caught 30 passes for 353 yards in the last three games alone, the most receptions over a three-game span in franchise history.

“It’s easy to identify him on the field because the ball seems to find him all the time and usually the ball finds good players,” interim coach Rich Bisaccia said. “I think he’s a really special player.”

“He’s the same guy every single day,” Carr said. "Happy for him and the success that he’s having. He’ll be the first one to tell you that he’d trade any of those catches or 100-yard days for wins.”

Renfrow scored the team’s lone TD in Sunday's 48-9 loss to the Kansas City Chiefs. The four-yard reception with 9:52 remaining in the game gave him his career-high fifth touchdown reception.

He has also set career highs in receiving yards in each of his first three seasons and so far has a personal best in yards per game (67.5) and catch percentage (81.1%).

The third-year receiver from Clemson even managed to provide some optimism following the blowout loss that has been one of the lowest points for the Raiders in a crumbling season. “We’re 6-7 and have four left,” said Renfrow, who caught 13 passes for 117 yards. “If we win out, we could be 10-7 and still get into the playoffs.”

Bisaccia said Renfrow's importance far exceeds games, as he’s quickly become a “mingler ... a locker room guy,” maturing into the type of leader his teammates can count on both on and off the field.

While the stats and compliments are flattering, Renfrow isn’t interested unless the Raiders are registering wins.

“It doesn’t matter how many catches I have or how many yards, if we lose the game, you can never say that’s a great game,” said Renfrow, who had one of the team’s five fumbles Sunday, four of which led to Kansas City touchdowns. “If you lost, you can always do more. You can always get better.”