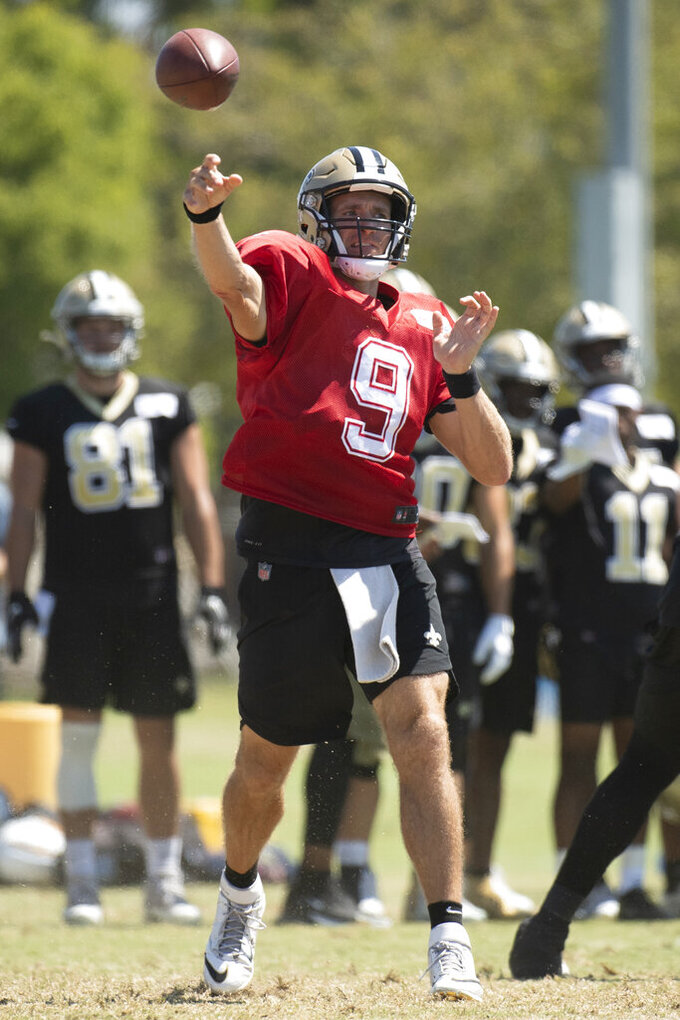 Bears defensive coordinator Chuck Pagano returns to the city where he used to be the head coach when Chicago travels to Indianapolis to face the Colts on Saturday.

Less than a month into the 2012 season, Pagano was diagnosed with leukemia and spent part of that year being treated for the disease before he could go on through a six-year stint as Colts coach.

Pagano said there is sure to be some emotion even if it is a preseason game.

"I'd be lying if I said there wasn't going to be any," Pagano said. "I'm sure, once we get down there, step out on the field and go through all the pregame stuff, see a lot of old faces, shake a lot of hands, high-fives and all that stuff.

"But, no, it's a business trip. We got a game to play and all that stuff and there's a lot on the line for a lot of these players. So our focus and our energy and everything has been in our preparation for the game. Had six great years there and have a lot of fond memories. So it'll be pretty cool."

The Bears won't play many starters. Coach Matt Nagy said earlier in the week his approach will be similar to the previous preseason game. Starting quarterback Mitchell Trubisky has been in for three plays this preseason, so he won't get more snaps until the regular season. The Bears won't play starters in the final preseason game Aug. 29 against Tennessee either, since it's only a week from the start of the regular season against the Packers.

Kicker Eddy Pineiro remains the focus for the Bears after Elliott Fry was cut. If Pineiro can continue kicking effectively, he can prevent the Bears from signing another kicker when teams make final roster cuts.

Saints quarterback Drew Brees hasn't played a snap yet this preseason. But it sounds as if that could change against — of all defensive coordinators — the Jets' blitz-happy Gregg Williams.

After seeing the hits Atlanta's Matt Ryan took from the Jets last week, one might have figured this weekend's third exhibition game would be a less-than-ideal time for New Orleans' 40-year-old, record-setting QB to take his only preseason snaps. Yet it sounds as if coach Sean Payton thinks this is when it needs to happen for the sake of better synching up the first-team offense.

"I think in a game like this, we'll plan on playing him," Payton said. "How much? We'll see. I think it's important for everyone else around him, too."

Brees is all too familiar with Williams, who was New Orleans' defensive coordinator from 2009-11, a stint that included the franchise's only Super Bowl and three straight playoff appearances. It was also the period during which the NFL investigated the Saints' "bounty" program that rewarded big and sometimes injurious hits with under-the-table cash payments. The scandal resulted in season-long suspensions for Williams and Payton in 2012.

However, running back Le'Veon Bell will not be on the field. The Jets are keeping him out of preseason games as a precaution, with Bell set to make his debut with the team in Week 1 of the regular season against Buffalo.

Center Ryan Kalil is expected to make his debut for the Jets and play about a quarter.

The 34-year-old Kalil came out of retirement earlier this month and has been getting back into football shape while learning the terminology of the Jets' playbook the last few weeks. He practiced in team drills for the first time Sunday, and had progressed in the days since.

With Ezekiel Elliott still holding out, the Cowboys are treating rookie Tony Pollard as the starting running back. He played just the first series in each of the first two preseason games, as did quarterback Dak Prescott. Both should get their most playing time of the preseason in Dallas' first home game.

Pollard has 58 yards on nine carries, a 6.4-yard average, with a 14-yard touchdown in two games. The TD came last week against the Rams. Prescott has completed all nine of his passes for 89 yards.

Receiver Amari Cooper hasn't played in the preseason while dealing with plantar fasciitis, but says he will be ready for the opener at home against the New York Giants on Sept. 8. Linebacker Sean Lee said he expects to make his preseason debut after injuring a knee in the first padded practice of training camp in California.

After playing just one series in his preseason debut last week, Houston quarterback Deshaun Watson is hoping to get a lot more playing time in the team's third preseason game.

"The whole game, really, if I had to," he said when asked what his ideal situation would be Saturday. "I just love to play football. Any time I get to play, especially in the NFL, the best athletes in the world, an opportunity to get on the field on a national stage is a blessing, a great opportunity for anybody."

Chiefs quarterback Patrick Mahomes could play into the second half in what is expected to be the reigning league MVP's final dress rehearsal before the start of the regular season Sept. 8 at Jacksonville.

The Chiefs also hope to get more work out of running back Damien Williams, who has been slowed much of camp by a hamstring injury. Their potent offense struggled in limited work last week in Pittsburgh, so coach Andy Reid wants to see better production from the No. 1 unit before likely getting the preseason finale off.

San Francisco quarterback Jimmy Garoppolo figures to get his most extensive action of the preseason in his return to the site of last year's season-ending knee injury.

Garoppolo is expected to play about a half in his second start since tearing his left ACL against the Chiefs last September. Garoppolo struggled in his return to game action last week when he completed 1 of 6 passes for no yards, an interception and a 0.0 passer rating at Denver.

Coach Vic Fangio is sitting Joe Flacco and most of his other starters: "It's our fourth game, not our third," said Fangio, whose team played in the Hall of Fame game. "I just feel like that it's the best thing for our team right now."

Asked if that messes up the usual game-planning done for starters in this upcoming preseason game, Fangio said, "I've never game-planned for any preseason game in my life. We just go out and play kind of basic football so we can evaluate the guys because it's hard to game plan because you never know who they've got in there either."

With Flacco sitting out and rookie Drew Lock (thumb) sidelined, Kevin Hogan will start and play most of the game with undrafted rookie Brett Rypien, who went 37-12 at Boise State, expected to replace him.

The Rams' final preseason game at the Coliseum will feature none of their starters or significant players as coach Sean McVay sticks to his strategy to rest everybody throughout August. Linebacker Obo Okoronkwo is among the younger players looking to earn roster spots and larger roles with strong play in the final two games.

The Cardinals are hoping for a much better all-around performance after a dismal effort against the Raiders last week.

No. 1 overall pick Kyler Murray said he hopes a slightly more expansive playbook will help the offense take a step forward after he completed just 3 of 8 passes for 12 yards against the Raiders. He was also sacked twice, including once for a safety, and called for two false starts.

The Cardinals also have questions at cornerback. Patrick Peterson is suspended for the season's first six games and the team's other projected starting cornerback Robert Alford is also out for several weeks because of a leg injury. In their absence, Tramaine Brock, Chris Jones and rookie Byron Murphy will see lots of time.

The Vikings will likely leave their starters in for the first half, giving quarterback Kirk Cousins more time with the revamped interior of the offensive line as the rollout of the new scheme under coordinator Kevin Stefanski and adviser Gary Kubiak continues.

Though the Vikings have one of the NFL's best wide receiver duos in Adam Thielen and Stefon Diggs, they've been waiting all summer for some of their younger players at that position to emerge as reliable depth. Chad Beebe, Brandon Zylstra and Olabisi Johnson have slowly separated themselves from the pack, but the last two preseason games will be critical opportunities for roster hopefuls with cutdown day looming next weekend.

Seattle's starters will likely get their final preseason action as Pete Carroll's plan in the past has the majority of them sitting for the final week of the preseason. Russell Wilson played one quarter last week in Minnesota and will likely get a bit more time against the Chargers.

The Seahawks' starting offense looked crisp against the Vikings with the exception of two missed third-down throws that would have extended drives.

The other competition to watch on offense will be the depth at wide receiver with several players — Jazz Ferguson, Keenan Reynolds, Gary Jennings, John Ursua, Malik Turner — battling for the final spots.

Philip Rivers, Keenan Allen and Joey Bosa will not play for the third straight game for the Chargers. Rivers, who used to want to get as many preseason snaps as possible, has been asked if he is comfortable rolling into the regular season without any live game reps and he said he would be ready to go. Allen tweaked his ankle last week but has practiced this week and hopefully should not miss time during the regular season. Bosa is a healthy scratch like Rivers.

Adrian Phillips and Jaylen Watkins will be scrutinized at safety after Derwin James had surgery for a stress fracture in his right foot. Watkins had an interception last week off a tipped pass.

Most of Pittsburgh's starters, including quarterback Ben Roethlisberger, will make extended preseason cameos, though the real intrigue is in what comes after Roethlisberger makes an exit.

Mason Rudolph and Josh Dobbs are competing to be Roethlisberger's backup, a spot Dobbs held last season. Coach Mike Tomlin has seen little separation between the two through two preseason games, though Rudolph did lead the Steelers to a touchdown drive last week against Kansas City.

Rookie inside linebacker Devin Bush expects to play after sitting out against the Chiefs because of a minor shoulder injury. Bush, the 10th overall pick in the draft, was a revelation in his NFL debut, racking up 10 tackles in the preseason opener against Tampa Bay.

The Titans got to work against the Patriots last week, and now they're hosting the Steelers in what coach Mike Vrabel calls a good test.

"Great organizations, physical football teams, sound in all three phases, aggressive defense, they're going to blitz, they're good inside, they're big, they're long, very technically sound, good on the edges," said Vrabel, who was drafted by the Steelers in the third round of the 1997 draft to start his 14-year career.

Vrabel has not said how much the Titans' starters will play, though safety Kevin Byard said Thursday the veterans are expected to play the most yet this preseason. The Titans finally got all their offensive weapons together in practice Wednesday with tight ends Delanie Walker and Jonnu Smith, receivers Corey Davis, rookie A.J. Brown and veteran Adam Humphries and running back Derrick Henry all on the field.