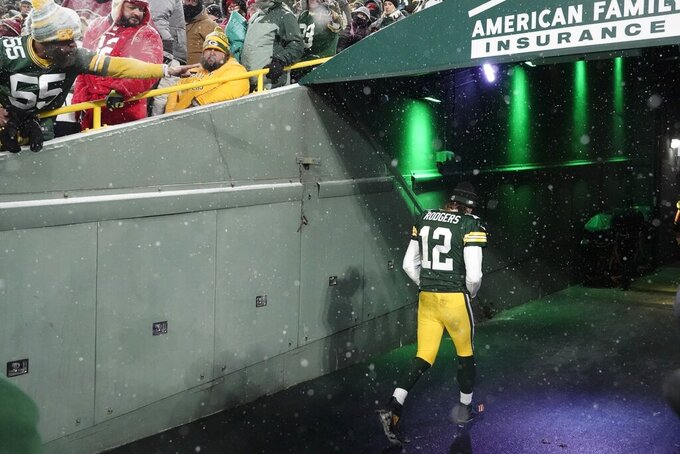 FILE - Green Bay Packers' Aaron Rodgers leaves the field after an NFC divisional playoff NFL football game against the San Francisco 49ers, Saturday, Jan. 22, 2022, in Green Bay, Wis. The Packers have grown all too accustomed to postseason heartbreak over the last decade or so, but the unexpected manner in which they fell 13-10 to the San Francisco 49ers in last season’s divisional playoffs has made it particularly tough to get over. (AP Photo/Morry Gash, File)

GREEN BAY, Wis. (AP) — Whether they watched it over and over or tried to avoid repeated viewings, the Green Bay Packers head into this upcoming season motivated by the stunning and sudden finish to their most recent playoff run.

The Packers have grown all too accustomed to postseason heartbreak over the past decade or so, but the circumstances surrounding their 13-10 NFC divisional playoff loss to the San Francisco 49ers made it particularly tough to get over.

Green Bay led 10-3 and had the ball after making a fourth-and-1 stop on its 19-yard line with 6:10 left, but the Packers couldn’t seal the victory. San Francisco scored the tying touchdown on a blocked punt with 4:41 left and made the winning field goal as time expired.

“I probably watched it over 20 times, trying to find ways we could’ve won,” outside linebacker Rashan Gary said this week during the Packers organized team activities.

Packers center Josh Myers studied game film from his rookie season, but only had six regular-season games and the playoff matchup to choose from since a knee injury and a finger problem caused him to miss the majority of the season.

That meant frequent viewings of the game that wrecked Green Bay’s title hopes.

“I didn’t have a full season of games to watch, so I watched all those games (that I played) 20 times over the offseason,” Myers said. “It was a tough one to watch over and over, but yeah, I watched it over and over.”

Special teams breakdowns made a big difference in that game. The Packers had a field-goal attempt blocked to go along with the crucial blocked punt. They had only 10 men on the field when San Francisco’s Robbie Gould made his winning field goal.

The Packers have since fired Maurice Drayton as special teams coordinator and replaced him with former Las Vegas Raiders interim head coach Rich Bisaccia. They allowed punter Corey Bojorquez to leave via free agency and replaced him with Pat O’Donnell, in part because they believed O’Donnell was a more consistent holder.

But it’s not just the special teams issues the Packers recall when they look back on that game. Other pivotal plays also have provided incentive.

The Packers led 7-0 and were driving in the first quarter when veteran tight end Marcedes Lewis caught a 1-yard pass and fumbled on a hit from Fred Warner. San Francisco’s Dre Greenlaw pounced on the loose ball at the 49ers 41-yard line.

“I watched it once and I’ll never watch it again,” Lewis said last week during the minicamp.

He didn’t need any other reminders. Lewis hadn’t lost a fumble since 2013, and the play has been on Lewis’ mind for much of the offseason.

“It’s something that for at least a month-and-a-half, I had nightmares about,” Lewis said.

Cornerback Jaire Alexander thinks about the tackle he didn’t make in the game’s final possession.

After missing the final 12 games of the regular season with a shoulder injury, Alexander returned to play eight defensive snaps against the 49ers. But the shoulder problem severely hindered his tackling ability.

Alexander missed a tackle that helped Deebo Samuel gain 9 yards on a third-and-7 play, giving the 49ers a first down at the Packers 29-yard line. Gould kicked his 45-yard field goal a few plays later.

“That fueled me for this offseason,” Alexander said.

Plenty of other players also had that game going through their minds as the Packers continue chasing their first Super Bowl berth since their 2010 championship season. Last season marked the second straight year in which the Packers failed to reach the Super Bowl despite having the NFC’s top playoff seed.

“I’ve had the fortune or misfortune I guess of how you look at it, of being really close a lot in my career to a ring, whether that be a national championship in college or a Super Bowl in the NFL,” said Myers, who played on two Ohio State teams that lost in the College Football Playoff. “Being close but not quite being there has been something that’s motivated me the last several offseasons.”

Gary had two sacks in the 49ers game and also was in on the fourth-and-1 stop that seemed to put the Packers in control. Then he saw it all slip away in the last five minutes.

He wants to make sure it doesn’t happen again

“It just made me hungrier,” Gary said.