Panthers playing it safe with McCaffrey in the preseason 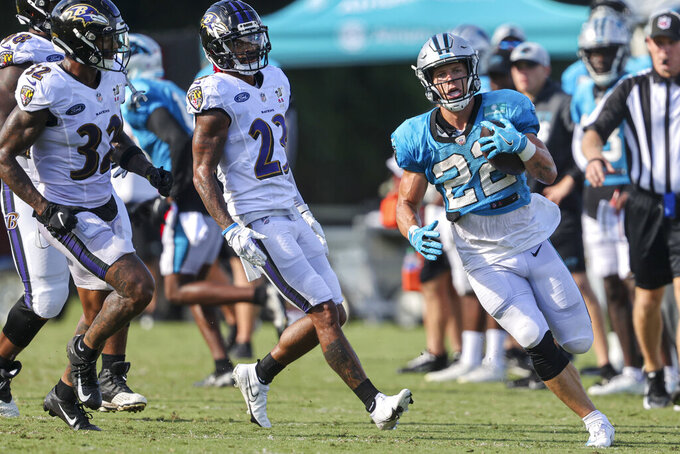 CHARLOTTE, N.C. (AP) — Carolina Panthers coach Matt Rhule is playing it safe when it comes to Christian McCaffrey’s playing time in the preseason.

Rhule said that while most of the team’s starters will play about one half in Carolina’s preseason finale Friday night against the Pittsburgh Steelers, the team's star running back will be “very, very limited” — if he even plays at all.

“He will take a lot of hits during the season, more so than anyone else out there on the field, so we will save his hits for the season,” Rhule said following Carolina’s practice Monday.

McCaffrey has not played in either of Carolina’s preseason losses with rookie Chuba Hubbard seeing the bulk of carries.

McCaffrey said he feels as if he got some of the absorbing blows during two joint practices each with the Baltimore Ravens and Indianapolis Colts.

“For sure, not only practicing against those guys, but our team practices pretty physical as well,” McCaffrey said. “I think it is important to get a little contact in before the season.”

Quarterback Sam Darnold is expected to play more than he did on Saturday night against the Ravens. Darnold played only seven snaps and completed 1 of 2 passes for 16 yards.

“My preference would be that our (starters) would play a good half of football, and we will see who exactly that is as we get closer to the game,” Rhule said.