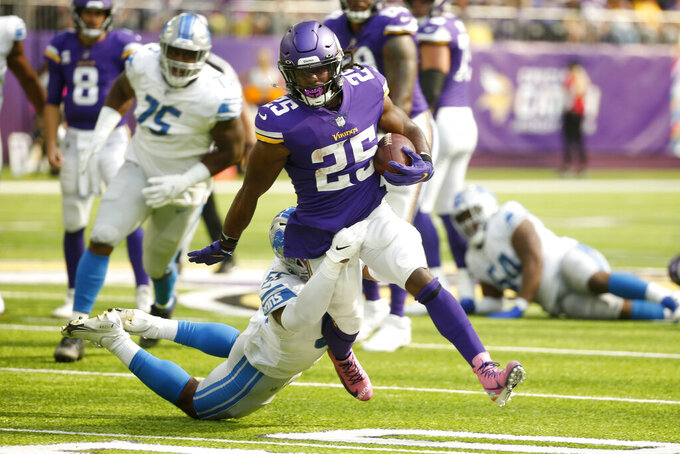 Minnesota Vikings running back Alexander Mattison (25) tries to break a tackle by Detroit Lions inside linebacker Derrick Barnes (55) during the first half of an NFL football game, Sunday, Oct. 10, 2021, in Minneapolis. (AP Photo/Bruce Kluckhohn)

CHARLOTTE, N.C. (AP) — The game between the Minnesota Vikings and Carolina Panthers on Sunday might just come down to who can score a touchdown in the second half.

Both teams have struggled coming out of the locker room at halftime this year.

For the Panthers (3-2), who’ve scored a league-low seven points in the third quarter, the second-half offensive lulls came back to bite them for a second straight week as the Philadelphia Eagles were able to stick around and ultimately erase a 12-point deficit and beat Carolina 21-18.

The Vikings' problems might be worse as they've gone eight quarters — and 24 offensive possessions — after halftime without a touchdown. Unlike Carolina, the Vikings (2-3) were able to hold on last week, beating the winless Detroit Lions 19-17 on a 54-yard field goal by Greg Joseph.

Vikings coach Mike Zimmer went looking for answers, asking his coaching staff to do some self-scouting earlier this week — something that's normally reserved for the bye week — to find a remedy for the second-half blues.

“I don’t know if I pinpointed it, but we’ve researched it an awful lot,” Zimmer said. “We went through every possession in the second half. We’ve gone through down-and-distance tendencies, first-and-possession, earned first downs, second-down-and-long after a penalty, after a sack. ..."

Zimmer said one modification the Vikings will make is having a more detailed plan coming out of halftime.

"Instead of saying, ‘Hey, these are the plays that we’re thinking about running,’ … going, ‘all right, here’s what we’re going to run. Here’s the first play, second play, third play,’ and we go from there,” Zimmer said.

"I think we will fix it,” Rhule said. “Most of our touchdowns happen in the first three or four drives of the game. And it’s like after those things that we are real comfortable with are gone and things get harder, everyone just starts pressing. Just play within the system, whether that is (quarterback) Sam (Darnold) or a linebacker. Don’t try to do too much.”

The Vikings and Panthers have met twice since Dalvin Cook and Christian McCaffrey were drafted in 2017, but they've yet to face each other due to injuries. Cook missed the game as a rookie with a knee injury and McCaffrey the rematch last year due to a shoulder injury.

That streak could continue Sunday as Cook is still working back from an ankle injury and McCaffrey is recovering from a strained hamstring.

Regardless, Cook called that 2017 running back class that also includes Leonard Fournette, Alvin Kamara, Joe Mixon, Kareem Hunt and Aaron Jones one of the most talented to come out of college.

“You can go back and check the track record. There are guys around the league still starting, still producing,” Cook said. “I think we were one of the best to come through."

Both teams remain a little unsettled at left tackle.

Vikings first-round draft pick Christian Darrisaw had his first game action there last week in a rotation with Rashod Hill. Darrisaw has been behind after undergoing his second core muscle surgery of the year during training camp, but he fared well in pass protection and figures to get more time, if not take over as the starter altogether.

“He had good energy. He was pretty dialed in,” Vikings center Garrett Bradbury said.

Carolina was without regular starting left tackle Cam Erving last week because of a neck injury, but he's back now. That allows $72 million man Taylor Moton to move back to his more natural position at right tackle.

Defensive end Everson Griffen has his starting spot back with the Vikings after playing his way past D.J. Wonnum on the depth chart. The 11-year veteran and four-time Pro Bowl pick, who re-signed with Minnesota in 2021 after one year elsewhere, had two sacks last week and has four this season.

“I’m very pleased where he is. He looks like the ‘Ev’ of 2017, 2018, and my job is to try to make sure that I keep that the way that it is,” said co-defensive coordinator and defensive line coach Andre Patterson.

One of the keys to watch in this game will be how Vikings QB Kirk Cousins and the offense perform on third downs.

The Panthers have the league's top third-down defense, allowing opponents to convert just 25.4% of their opportunities into first downs. The Vikings offense ranks 18th in the league in third down efficiency, converting just 38.1% of the time.

Rhule is gaining more trust in kicker Zane Gonzalez, who connected on field goal attempts of 43, 48 and 50 yards last week against the Eagles, and is now 6 of 8 on the season with one kick blocked because of poor protection up front.

Joseph has been in a groove for Minnesota since missing an extra point and a 37-yard field goal on the final play in a 34-33 loss at Arizona on Sept. 19. The native of South Africa is 7 of 8 on field goals and 5 for 5 on extra points in the last three games. He's 5 for 5 on field goal attempts from 50 yards or longer.