Patriots' Damien Harris excited to get back on the field 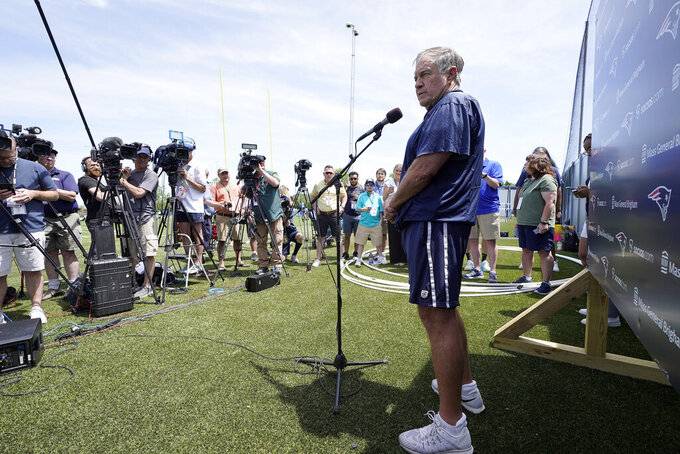 FOXBOROUGH, Mass. (AP) — Lining up at his customary position in the New England Patriots' backfield on Tuesday, Damien Harris felt a rush of adrenaline.

“It’s a lot of fun just having the opportunity to come out here with this team, having all our guys back just brings all the more excitement,” the 5-foot-11, 213-pound running back said following the Patriots’ first practice at their mandatory minicamp.

“Every time you touch the ball you want good results to happen, so you’ve got to practice good habits, practice good fundamentals, and let the rest take care of the rest. But, like I said, (it’s a) really exciting time right now having all of our guys back, being able to come out here for the first time as a collective team, as a collective unit. So I’m really excited to be out here, and it was a good day.”

Good things generally happened when Harris touched the ball last season as he gained a career-high 929 yards on 202 carries (an average of 4.6 yards per attempt) and scored 15 touchdowns while appearing in 15 regular-season games.

A third-round pick out of Alabama in the 2019 draft and in his fourth season with the team, Harris will be part of a Patriots offense that is undergoing major change.

Josh McDaniels, the Patriots’ long-time offensive coordinator and quarterbacks coach, is gone, having left earlier this offseason to become the head coach of the Las Vegas Raiders.

While a new offensive coordinator hasn’t been announced, head coach Bill Belichick, former Detroit Lions head coach Matt Patricia (officially listed as a senior football adviser by the Patriots) and former New York Giants head coach Joe Judge (listed as an offensive assistant by the team) have all been seen taking hands-on approaches at the organized team activities that preceded the start of Tuesday’s minicamp.

With the changes in the coaching staff there has been a change in the terminology the team uses on offense. According to Harris, adapting to change is simply part of the job.

“Every year things change and you’ve got new players, new coaches, new schemes sometimes, and every day I come in with the mentality to just learn and improve and do whatever I can,” said Harris. “So whatever changes, whatever tweaks need to be made, that’s up to the coaches. They make those decisions.

“As a player, it’s my job to come in with that mentality, ready to learn, be able to adapt, be able to handle anything that they throw our way, so whatever adjustments they make they make. Whatever the game plan is, whatever they ask us to do out here during these OTA (and minicamp) practices, that’s what we’ve got to do.”

For Harris, it’s all the continuation of a learning process.

With Day One behind it, Harris said the team’s goal is to continue to improve over the next couple of days of minicamp, which is scheduled to conclude on Thursday.

“Keep stacking ’em, keep stacking the days together, improve every single day,” he said. “Come out with the right mentality, the mentality to get better and to improve and do everything we can to be better football players individually and a better team.”