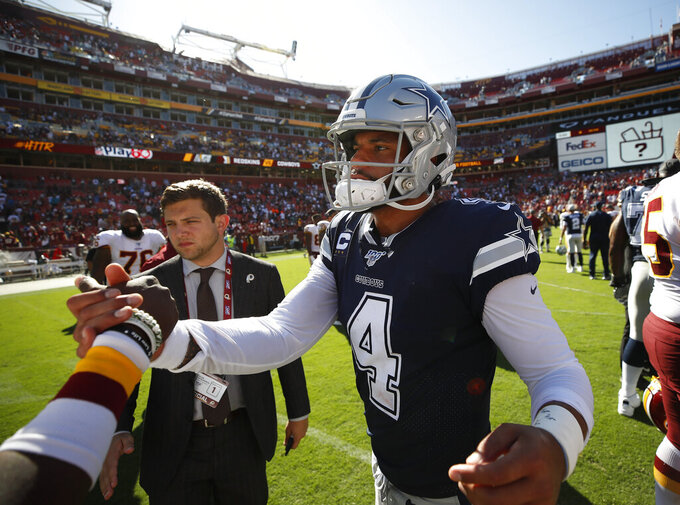 ARLINGTON, Texas (AP) — Dak Prescott and the Dallas Cowboys are off to a hot start that has them looking like the playoff contenders they figured to be as long as Ezekiel Elliott's preseason-long holdout ended in time, which it did.

The Miami Dolphins are dealing with the latest "elephant in the room" — the rare dishonor of being 20-plus-point underdogs in an NFL game after one of the most dismal beginnings to a season in nearly 60 years.

Josh Rosen is replacing Ryan Fitzpatrick at quarterback Sunday at the Cowboys (2-0) after Fitzpatrick compiled a 39.9 passer rating while the Dolphins (0-2) were outscored 102-10. No team since 1961 had a worse point differential after two games.

Rosen, traded by Arizona after the Cardinals drafted him 10th overall in 2018 before changing coaches and taking Kyler Murray No. 1 overall this year, played the fourth quarter of last week's 43-0 loss to New England.

The 36-year-old Fitzpatrick was asked about drops by receivers when he made the "elephant in the room" comment, while also mentioning the dismantling of the roster under first-year coach Brian Flores.

The latest move, earlier this week, was sending disgruntled defensive back Minkah Fitzpatrick to Pittsburgh for a first-round pick. Left tackle Laremy Tunsil and receiver Kenny Stills were shipped to Houston at the end of the preseason.

"A lot of this stuff, it's got to be talked about and put out there, and then you move on," Ryan Fitzpatrick said. "That's kind of the way that it's been handled."

The Cowboys don't want to talk about whether they thought a 20-point spread in a pro game was even possible. "That's for the bettors, I guess," receiver Randall Cobb said.

"The NFL is so tight, from the top to the bottom," center Travis Frederick said. "The difference in that is a couple of bad bounces, maybe a couple of interceptions. There's a really minute difference. From the outside, it might look bigger than that. But on the inside, it's a tight game."

Some story lines going into the 15th meeting in a series that's been a lot closer than this week's line (23 as of Wednesday) would indicate — each franchise has seven victories:

The Cowboys haven't started a season with 400-plus yards and 30-plus points in each of their first two victories since 1978, back when going to the Super Bowl was a regular thing for them. This year, Dallas hopes to end a nearly 25-year stretch without advancing past the divisional round.

Prescott is trying to become just the third quarterback with at least three touchdown tosses and a passer rating of 120-plus in four straight games. His streak goes back to last year's regular-season finale. Russell Wilson had five straight for Seattle in 2015, the now-retired Andrew Luck four with Indianapolis last year.

The Dolphins have been outscored by 49 and 43 points in their first two games — the worst and third-worst regular-season defeats in franchise history. Don Shula coached Miami for 26 seasons and was never beaten so badly.

After the latest deal involving Minkah Fitzpatrick, the Dolphins have three first-round picks in 2020, but that won't help them against the Cowboys.

"They're rebuilding," said Pro Football Hall of Fame quarterback Dan Fouts, an analyst for CBS who covered the loss to the Patriots. "It's hard. It's hard on the players, the coaches, the staff, the families, the fans. It's tough."

Elliott is another step closer to full speed. The two-time rushing champion was right on his career average for touches (25) in the 31-21 victory at Washington. Thanks to a 27-yard carry on the last real play before a kneel-down, Elliott had his 20th career 100-yard game (111).

After spending almost the entire preseason working out in Mexico, Elliott has his most yards rushing through two games (164) in his fourth season. "I did take care of business when I was gone, but that was expected," the 2016 All-Pro said.

The Dolphins claimed former Dallas defensive end Taco Charlton on Thursday, a day after the Cowboys waived their 2017 first-round pick. Although the move might be too late in the week for Charlton to be ready in time to play, the former Michigan player would love the chance to show something to the team he felt gave up on him too soon.

Charlton, gone after just 27 games and four sacks as the 28th overall pick, went into training camp with his roster spot in jeopardy but was solid in preseason games while other defensive linemen recovered from injuries. With those missing plays back, Charlton was a healthy scratch the first two weeks.

Receiver Michael Gallup, who leads the Cowboys with 13 catches for 226 yards, is expected to miss up to a month after surgery for a left knee injury sustained against the Redskins. Safety Xavier Woods (ankle) and defensive tackle Antwaun Woods (knee) also got hurt in that game and are unlikely to play.