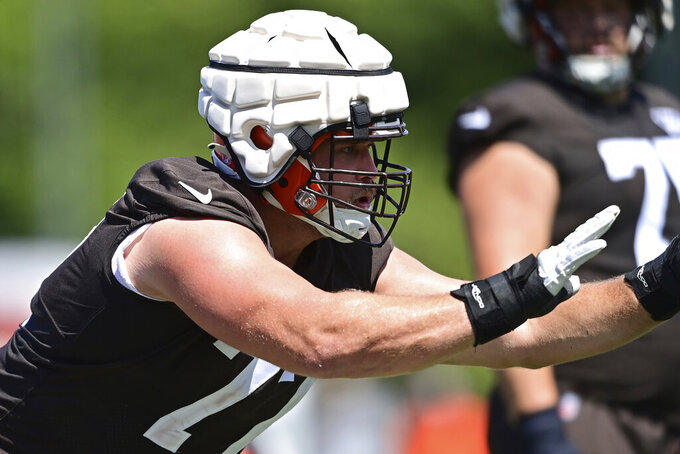 The Cleveland Browns rewarded him with a $56.8 million, four-year contract extension.

Accolades and big money only go so far, though, when your primary goal is a winning a championship.

“Last year, I thought we were going to go to the Super Bowl,” Teller said Friday at training camp. “I guess that’s the joke the Browns (and their fans) always have, but I really thought we were a dominating team and we just couldn’t stay healthy. So, I’m not focused on anything else right now but game one.”

Cleveland is one week away from its preseason opener at Jacksonville, which its players view as a fresh start following a disheartening 8-9 campaign. Teller was a rock throughout, being named second-team All-NFL for the second year in a row.

Teller, who is 6-foot-4 and 315 pounds, has eagerly filled the leadership void on the unit.

“Let’s get healthy, let’s run the ball and let’s kick some butt,” the four-year veteran said. “Whoever is at quarterback, we have a talented offensive line and an amazing running back group, so let’s use them. Let’s do what we do best.

“It gets people’s eyes in the backfield, then you have five guys running off the ball, trying to smash you in the face.”

Cleveland led the NFL with a 5.09-yard average per carry last season, and Nick Chubb finished second in the league in rushing yards. All-purpose back Kareem Hunt and emerging threat D’Ernest Johnson complete the three-headed monster at the position.

“When you look at last year, I don’t think there was one time that our starting five finished a game together,” Teller said. “That’s not good. There was always someone hurt. We’ve just got to stay healthy and play, and I think we’ll be all right.”

NOTES: Coach Kevin Stefanski said he hasn’t decided how to divide the playing time at quarterback against the Jaguars. ... The outdoor portion of practice ended after 75 minutes when thunderstorms rolled in, forcing fans to quickly exit the suburban training facility. The session continued inside the fieldhouse. ... Harris left practice after being poked in the eye and was replaced by C Ethan Pocic. ... WR Anthony Schwartz (left knee strain) and rookie WR David Bell (foot) remain sidelined, but Stefanski said both are “really, really close” to returning.