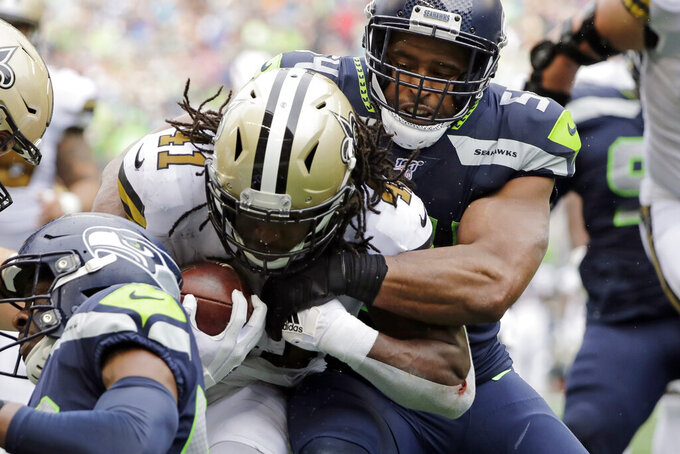 RENTON, Wash. (AP) — While he's shown willingness throughout his time in Seattle of taking accountability for decisions, it hasn't been often where Pete Carroll straight up calls out his own performance in general for being substandard.

But that was the tone Carroll was left to take on Monday after a baffling 33-27 loss to New Orleans where very little went right for the Seahawks, including decisions by the head coach.

"I've got some questions of myself," Carroll said. "I've got to do better. I've got to coach better."

After escaping the first two weeks of the season with victories despite significant mistakes, the miscues finally caught up to Carroll and the Seahawks in Week 3.

No one was seemingly immune from what became a collective meltdown. Carroll made questionable coaching decisions. The defense couldn't tackle Alvin Kamara. The offense had costly penalties and a turnover returned for a touchdown. Special teams allowed a punt return for a TD.

What was expected to be a speedbump on their way to a 3-0 start with New Orleans playing minus quarterback Drew Brees instead became an even louder alarm for the ugly way the Seahawks have played the first three weeks.

"We're playing teams that are playoff-caliber teams, Super Bowl-caliber teams and you can't put yourself in the hole and expect to just find a way to be able to always come back every single time," Seattle WR Tyler Lockett said.

Russell Wilson and Bobby Wagner. The two highest-paid players in the league at their respective positions should be working, but both stood out in a losing effort. Wilson threw for 406 yards in trying to rally Seattle from its deficit, although it wasn't a perfect performance by Wilson. He threw for two touchdowns and ran for two more but missed Lockett on a potential touchdown in the second half. Wagner had 18 tackles and along with K.J. Wright seemed to be the only sure tacklers on Seattle's defense trying to slow down Kamara.

Seattle's run game that was the best in the NFL a year ago is a mess. Run lanes that were open last season have been closed. Carson is fumbling at an alarming rate. Carroll said the Seahawks were "arrogant" with their run-game approach in the season opener against Cincinnati, but it hasn't gotten any better. Take away a trio of long runs of more than 20 yards — one in each of the three games — and Carson has carried 42 times for 104 yards, an average of 2.47 yards per carry.

It's not all on Carson as Seattle's offensive line needs to be better in run-blocking.

"I would like to see the consistency. It's kind of big-little right now," Carroll said. "Chris has had a couple of runs he's popped out there but not as much consistency as we would have liked."

Lockett was mostly invisible in Week 1 outside of catching a 44-yard touchdown for his only reception in the opener. He's made up for it the past two weeks with 21 receptions over the past two games. Lockett had 10 catches for 79 yards against Pittsburgh and followed up with 11 receptions for a career-high 154 yards against the Saints. The past two weeks have quieted the concerns about whether Lockett could move into the role of being the No. 1 wide receiver for Seattle following the retirement of Doug Baldwin.

Al Woods and Tedric Thompson both had forgettable penalties against the Saints. And only one of them was playing on Sunday.

Woods was flagged for illegal formation on a 53-yard field-goal attempt Will Lutz missed in the third quarter. Woods lined up over the center and was flagged for the infraction giving New Orleans a first down. The drive eventually ended with Michael Thomas catching a 1-yard touchdown.

Thompson, who was inactive because of a hamstring injury, was penalized when he came off the sideline to celebrate with teammates after New Orleans' Deonte Harris fumbled a punt that was recovered by the Seahawks. Seattle was backed up 15 yards and eventually got zero points out of the drive.

There was concern about left tackle Duane Brown coming out of the loss after he didn't play the closing minutes with an arm injury. Carroll said Brown was diagnosed with a strained biceps and he should be OK to play this week against Arizona. Safety Bradley McDougald has a slightly sprained ankle and Carroll said they won't know his status until later in the week. There also remains uncertainty about the status of RB Rashaad Penny after suffering a strained hamstring in practice late last week.

50 — Wilson's 50 pass attempts were a career high. Seattle is 2-8 in games — regular season and postseason — where Wilson has attempted 40 or more passes.

The Seahawks get their first look at Kyler Murray and the new-look offense in Arizona on Sunday. The Seahawks have won five of their past six trips to the desert with the other game finishing in a 6-6 tie.