Raiders get aggressive vs. Cowboys to end 3-game skid 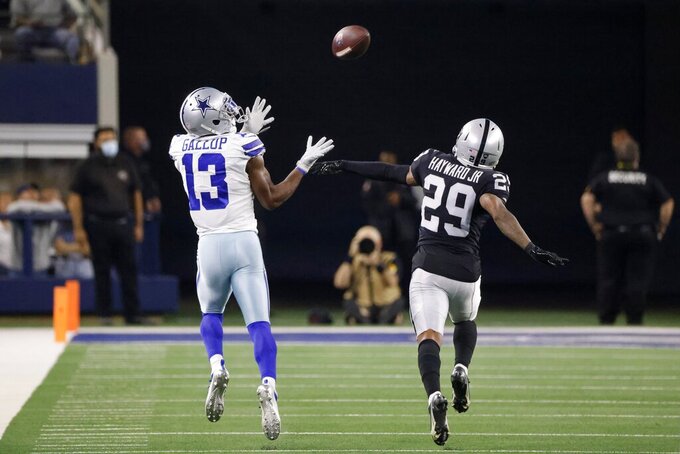 Derek Carr has been around the NFL long enough to know the mood and perception of a team can flip in an instant.

Just a few days after looking as down as he ever has publicly after a loss in the NFL, Carr was in a much better frame of mind after his aggressive play helped lead the Las Vegas Raiders to a 36-33 overtime win over the Dallas Cowboys that snapped a three-game skid.

“It is really hard when nobody likes you, nobody cares for you, nobody wants to text you before the game anymore, those kinds of things. Not saying it happens to me — maybe some people,” Carr said. “For us to battle through all that — we were up against a wall. There was no doubt about that. That’s just a fact, everyone can see that.”

The Thanksgiving day win for the Raiders (6-5) kept them in the playoff hunt in the AFC after they were in danger of falling out of it after being held to 43 points in the three-game skid.

The offense had stalled in the absence of deep threat Henry Ruggs III as Carr had reverted to his more conservative nature and didn't push the ball down the field.

But he was much more aggressive against the Cowboys, throwing for 373 yards and completing seven passes that went at least 10 yards downfield.

"It was fun to watch him play.”

The Raiders will need that kind of play down the stretch from Carr if they want to make a playoff run and get to the postseason for the second time in the past 19 seasons.

They have wilted late the past two seasons and fallen short of the postseason, and Carr is still waiting for his first playoff shot after missing out because of an injury in 2016.

“We are playing meaningful games,” he said. “It is something we have gotten to do here a couple times. The one time we go to the playoffs, I broke my leg and I didn’t get to play. That’s disheartening, but it’s that drive. It’s that thing that keeps staying in my heart that I just want to do it for this organization.”

Third-down defense. After ranking second worst in the NFL the past three weeks in getting off the field on third down by allowing a 53.5% conversion rate, the Raiders held Dallas to just 3 for 13 (23.1%), their best rate in a game since 2019.

Kick coverage. Daniel Carlson had six touchbacks on nine kickoffs but Las Vegas got burned bad on one of the ones he kept in the field. Tony Pollard returned a kick 100 yards for a TD in the third quarter for the first kick return score allowed by the Raiders since 2015.

DeSean Jackson. After making little impact his first two games with the Raiders, Jackson's speed opened things up for the Las Vegas offense. Jackson had three catches for 102 yards, including a 56-yard TD on the opening possession and also drew two pass interference calls for 47 yards.

Casey Hayward. The cornerback had been one of the more dependable defenders for the Raiders this season, but struggled against the Cowboys. He allowed two deep passes to Michael Gallup and allowed five catches on five targets for 102 yards for the game, according to Pro Football Focus.

307 — The Raiders wide receivers combined for 307 yards receiving a week after combining for a season-low 50. That was the fifth best mark in a game in franchise history and most since the wideouts had 350 in an overtime win over Tampa Bay on Oct. 30, 2016.

The Raiders host Washington on Dec. 5.