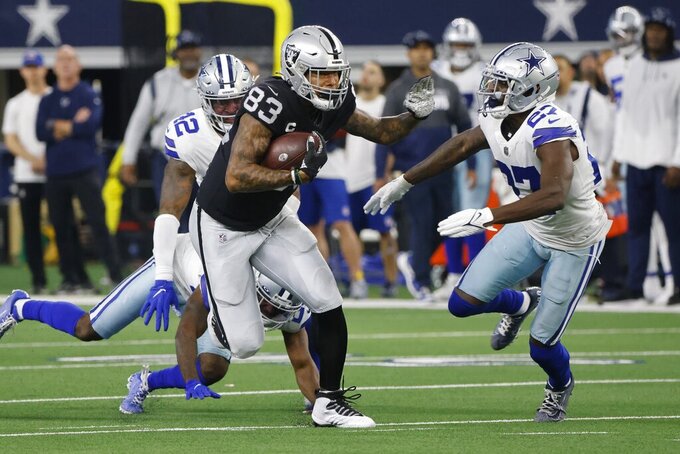 Las Vegas Raiders tight end Darren Waller (83) picks up a first down after catching a pass as Dallas Cowboys' Keanu Neal (42) and Jayron Kearse (27) move in to make the stop in the first half of an NFL football game in Arlington, Texas, Thursday, Nov. 25, 2021. (AP Photo/Michael Ainsworth)

HENDERSON, Nev. (AP) — Las Vegas Raiders tight end Darren Waller will miss his second straight game with injuries to his knee and back.

Coach Rich Bisaccia said Friday that Waller had been ruled out of the division showdown against Kansas City because of the injuries. Foster Moreau will once again start in his place.

Defensive end Carl Nassib (knee) and backup linebacker Patrick Onwuasor (hamstring) are also out for the game, while linebacker Denzel Perryman is doubtful with an ankle injury.

The Raiders are hoping to get cornerback Trayvon Mullen back this week from a foot injury. Mullen got hurt in Week 4 and has been on injured reserve. He returned to practice last week and could be activated on Saturday.

The loss of Waller is a significant one for the Raiders (6-6), who have lost four of the past five games as the offense has stalled. Waller is second on the team with 53 catches for 643 yards and has been quarterback Derek Carr's most trusted option the past three seasons.

Moreau played in Waller's place in a Week 7 win over Philadelphia with six catches for 60 yards and a touchdown. Moreau has just two catches on eight targets for 37 yards the past two weeks with Waller out.

Waller got hurt in the second quarter on Thanksgiving against Dallas.