Rams get RB Sony Michel from Patriots for 2022 draft picks 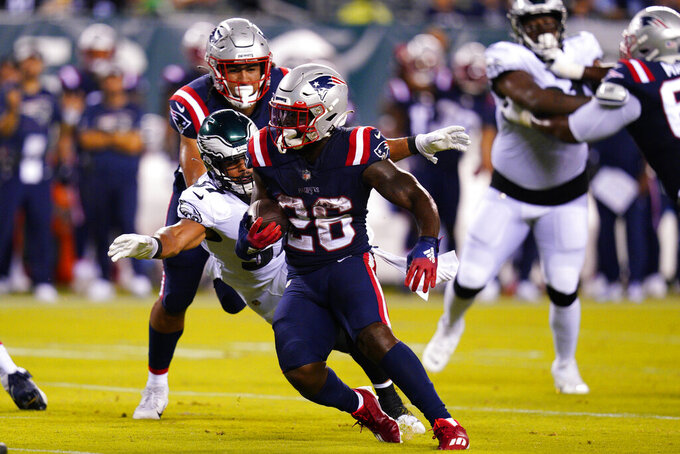 FOXBOROUGH, Mass. (AP) — The Los Angeles Rams are getting some much-needed help in the backfield from a running back who starred against them in the Super Bowl.

The Rams acquired Sony Michel from the New England Patriots on Wednesday for a conditional selection of later-round picks in next season's draft.

Michel, a first-round pick by the Pats in 2018, could play a significant role immediately for a Rams offense running low on healthy options at running back with the regular season fast approaching.

“We identified Sony for many reasons, No. 1 being his experience,” Rams general manager Les Snead said. “Meaning a player who's carried the ball in big games, in big moments, big drives, big series. The experience of where he played, how he was coached. If we were going to go the route of experience, he was someone that we were definitely eyeing from the start.”

The Rams had an up-close view of Michel's biggest game of all: He rushed for 94 yards and scored the only touchdown as a rookie in New England's 13-3 victory over Los Angeles in the Super Bowl in February 2019.

“When we were preparing for Sony even then, you felt him, even on film,” Snead said. “There's the cut. He's getting north and south. A linebacker is meeting him, and he's getting 2 more yards after the linebacker meets him. That's Sony.”

The Rams already lost two of their top three running backs from last season because of Cam Akers’ season-ending Achilles tendon injury and Malcolm Brown’s departure for Miami. When Darrell Henderson left practice Monday with a sprained thumb, the Rams quickly made a move to bolster the depth of coach Sean McVay's offense, which didn't have a healthy running back who had ever carried the ball in an NFL game.

In joining the Rams, Michel follows in the footsteps of fellow Georgia product Todd Gurley, who famously claimed he taught the younger Michel “everything” when they were teammates with the Bulldogs. Michel's position coach in Los Angeles will be Thomas Brown, who was also his position coach at Georgia in 2015.

Michel is scheduled to arrive on the West Coast on Wednesday night, Snead said. Although he grew up in Florida and has spent his life on the East Coast, Michel already has fond memories from Southern California: He rushed for 181 yards and scored four total touchdowns — including the game-winner in double overtime — in Georgia’s epic, 54-48 College Football Playoff victory over Oklahoma at the Rose Bowl in January 2018.

Michel entered the preseason at a pivotal point of his injury-plagued career. The Patriots declined to pick up his fifth-year option in May, clearing the way from him to become a free agent after this season.

During his rookie campaign, Michel fought through the lingering effects of the left knee injury he suffered as a senior at Georgia. He appeared in eight games and rushed for 931 yards and six touchdowns, averaging 4.7 yards per carry.

But Michel had an excellent postseason as a rookie, rushing for 336 yards and scoring six touchdowns in New England's three playoff games. Only Denver Broncos Hall of Famer Terrell Davis ever rushed for more TDs in a single postseason.

Michel appeared in 14 games in 2019, but his production declined. He ran for 912 yards and seven TDs with his yards-per-carry average falling to 3.7.

That average rose to 5.7 last season before a quadriceps injury sidelined him for six games. The 26-year-old also spent a week on the COVID-19 list.

His contract status left him entering training camp fighting for a roster spot this season in New England.

Damien Harris was productive in 2020, his second season, and got most of the snaps. The Patriots drafted former Oklahoma running back Rhamondre Stevenson in the fourth round in April, and he joined a depth chart that also includes veteran James White, Brandon Bolden and J.J. Taylor.

Stevenson had two impressive performances during the first two exhibition games, running for four touchdowns, including a 91-yard score.

Snead said the Rams are confident Jones or Funk can play as their third running back if McVay elects to use three backs extensively, as he did last season.