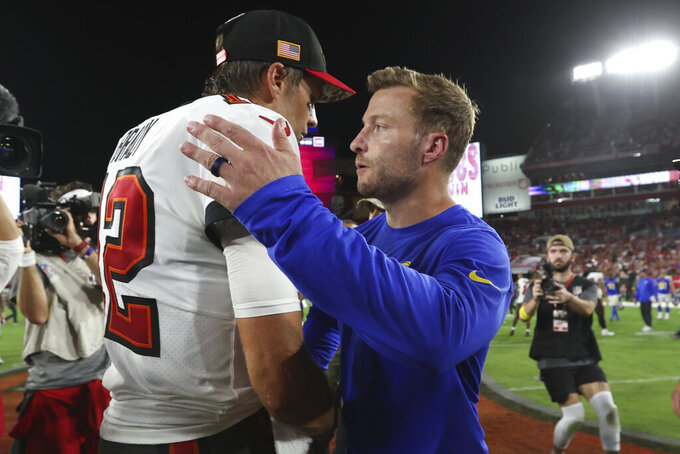 LOS ANGELES (AP) — The Los Angeles Rams' post-Super Bowl malaise is lasting longer and getting uglier than most people expected.

The Rams are 3-5 near the midway point of their season after blowing a late lead and taking an unsightly 16-13 defeat at Tampa Bay, their fourth loss in five games. They had never before been two games under .500 during Sean McVay's six seasons as coach, and LA had never been a losing team at any point in McVay's career until this year.

The Rams' problems are almost entirely related to their offense, which has a largely terrible line, a lack of game-breaking talent behind Cooper Kupp and a profound ineptitude both on first downs and late in games.

That offense is almost entirely McVay's responsibility, and the youngest coach to win a Super Bowl in NFL history knows the Rams' fate is on his group's shoulders.

“This is not good enough,” McVay said after his group gained a laughable 203 yards in Tampa — 69 of those on one catch by Kupp. "Changes have to be made. Adjustments have to be made. We can’t continue to go on with this.”

Whether he has the time or the resources to do anything substantial is up for debate. The Rams already had their bye week, and they failed to make a splashy deal at the trade deadline to bolster their roster, as they've done so many times in the recent past.

Only Tennessee is averaging fewer yards per game this season than the Rams' 286. Los Angeles has topped 350 yards just once in its eight games — a shocking decline for a unit that's been among the tops in the league during McVay's best seasons.

“We’ve got to look ourselves in the mirror, dig down deep and find ways to execute, find ways to strain and make plays,” receiver Allen Robinson said Monday. “That’s how games in this league are won. You’ve got to make the tough ones.”

The offseason departures of linemen Andrew Whitworth and Austin Corbett started the offense's problems, while the signing of Robinson and trading of Robert Woods in rapid succession further undermined its foundation.

And then the injuries kicked in: The Rams have five offensive linemen on injured reserve, and at least three of them won’t play again this season. Los Angeles has used eight different starting line combinations in its eight games, a probable recipe for disaster.

Every aspect of coordinator Raheem Morris' defense has been largely solid despite a thin secondary. The Rams are eighth in the NFL with just 312.4 yards allowed per game, playing particularly well against the run, and linebacker Bobby Wagner's arrival has been a boost in several aspects of the game.

Los Angeles' running game remains inept, ranking 31st in the league with a meager 68.4 yards per game. Cam Akers gained 3 yards on five carries at Tampa Bay in his return from a three-week absence following a spat with the coaching staff. Darrell Henderson has played better, but he rarely has any space behind that offensive line.

Matthew Stafford grades out poorly in some analysis metrics, yet he's completing a career-high 68.4% of his throws despite getting sacked 28 times — only two fewer than in all of the 2021 regular season. He’s also thrown just three interceptions in the last six games after throwing five in the first two games. His connection with Robinson is even improving, although not quickly enough to make a difference.

Substitute left guard Bobby Evans had his second straight rough game at Tampa Bay, allowing three sacks and getting regularly routed by Vita Vea. He also yielded several pressures, a couple of hits and a sack the previous week against San Francisco.

Evans, a third-round pick out of Oklahoma in 2019, is an exemplar of the Rams' problems on the line: He has not panned out as an NFL contributor despite his relatively high draft status, and he wouldn't be playing now if not for injuries to David Edwards, Coleman Shelton and Tremayne Anchrum Jr.

The Rams' important injury problems have been largely confined to the line. The running game could get a boost with the debut of rookie Kyren Williams, who is expected to return from an ankle injury soon.

0 — The number of receptions this season by Van Jefferson, the Rams' 21-game starter and No. 3 wideout last season. Jefferson had knee surgery early in training camp and returned two games ago, but he still hasn't had the ball in his hands despite five targets at Tampa Bay. The Rams' overall lack of playmaking behind Kupp has been a nightmare.

The Rams are still clearly in the playoff race, but the second half of the season is a gut check for McVay, who spoke both openly and privately about burnout and possible retirement in the past year. The Rams will find out in the next month whether their in-demand coach has the determination to dig in and truly fix the Rams' problems.

After January, the spotlight shifts to GM Les Snead, who must figure out how to restock the Rams' roster with his limited draft resources and cap space.