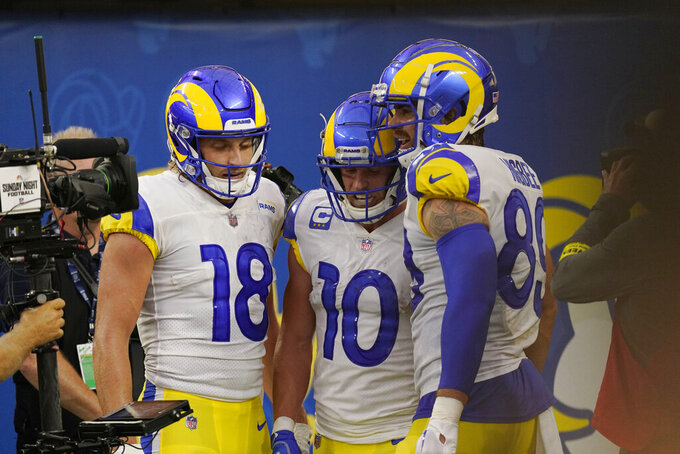 Skowronek was a major contributor to the Rams' 20-12 victory at Arizona last week, and he lined up all across Los Angeles' formations — including numerous snaps in which he started out at the spot typically occupied by a fullback.

That's strange for a few reasons, not just because Los Angeles hardly ever uses a fullback, and McVay has gone years without having a player conventionally filling that role on his roster.

But the ever-inventive coach decided to surprise the Rams' past two opponents by lining up Skowronek in the backfield between the quarterback and the running back. Skowronek then did all sorts of things after the snap, ranging from sprinting out for receptions to blocking for a ball-carrier.

“There’s some stuff obviously that’s different, like the paths that I have to take through the holes, that I’m learning,” Skowronek said. “I was thinking a lot about it last week, and now it’s starting to become muscle memory for me.”

Skowronek led the Rams with 66 yards receiving in Arizona on just four catches. He also served as the lead blocker for Cam Akers on his 14-yard TD run, taking out the Cardinals’ Zaven Collins with zeal.

“What else can you say, except for he’s a war daddy, with what Ben Skowronek did leading up in there,” McVay said with a grin.

Skowronek had yet another highlight-reel moment when he lined up in the slot and knocked down superstar J.J. Watt with a block before getting up and catching a pass from Matthew Stafford.

It's another improbable chapter for the former receiver at Northwestern and Notre Dame, who joined the Rams as a seventh-round draft pick last season, the 249th overall.

He played only intermittently on offense as a rookie, but postseason injuries pushed him into a regular role that included two catches for 12 yards while playing 46 offensive snaps in the Rams' Super Bowl victory.

Now an NFL champion after just one season in the league, Skowronek has become an integral part of the Rams' offense this fall in the injury absence of Van Jefferson. With 10 catches for 107 yards in Los Angeles' first three games, he has nearly surpassed his totals from his entire 17-game rookie season.

The Rams have always relied on aggressive blocking by their receivers, with Cooper Kupp and now-traded veteran Robert Woods making particularly strong contributions which Skowronek strives to emulate.

Still, Skowronek had no idea he was about to have an additional job title before McVay called him into the coach’s office four days before the Rams’ visit from Atlanta in Week 2.

“Never really met with Coach McVay 1-on-1, so I didn’t know what to expect,” Skowronek said.

”When the head coach tells you to come to his office, I don’t know, I was like, ‘What did I do?’”

He did enough as a versatile, hard-nosed football player for McVay to trust him with further responsibilities, and Skowronek lined up as a fullback on about one-third of the Rams' snaps against the Falcons.

Skowronek got to do a bit of everything against the Cardinals, and the San Francisco 49ers' defense will have plenty of work to do if they intend to scheme against everything McVay might throw at them from his newest unusual formations.

“It takes players to be able to fit, and you certainly can’t do that unless you have somebody like a Ben Skowronek that has the toughness, the physicality, the overall football IQ and intelligence to be able to play a bunch of different spots,” McVay said. “Because he’s playing receiver, he’s playing fullback in a lot of those two-back looks, (and) there’s certain plays that we ask him to do (in which) the roles are similar to a tight end.”