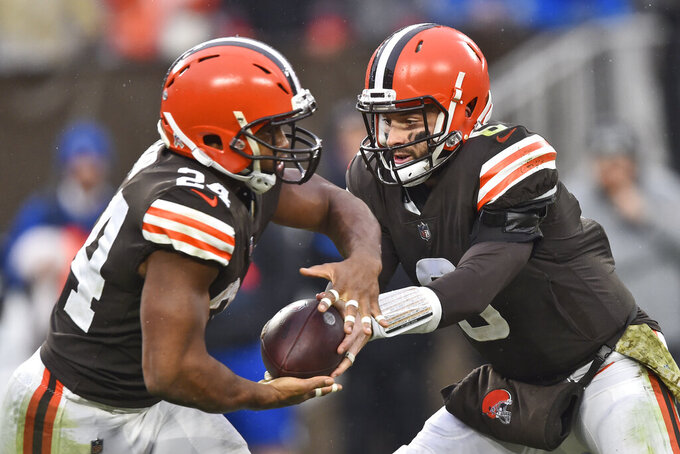 Cleveland Browns quarterback Baker Mayfield (6) hands off the ball to running back Nick Chubb (24) during the second half of an NFL football game against the Detroit Lions, Sunday, Nov. 21, 2021, in Cleveland. (AP Photo/David Richard)

OWINGS MILLS, Md. (AP) — Of all the times Lamar Jackson has rescued the Baltimore Ravens in his young career, last season's game at Cleveland stands out.

The star quarterback left the game with cramps, then returned for a fourth-down play and threw a long touchdown pass to Marquise Brown, part of a back-and-forth final quarter in which the Ravens ultimately won on Justin Tucker's 55-yard kick with 2 seconds left.

The Monday night clash was one of the most memorable games of the 2020 NFL season.

“My whole body cramped. Scoring back and forth — both teams,” Jackson said Wednesday. "That’s what I remember the most, just going back and forth, just started scoring touchdowns. They scoring, we scoring, a lot of ping pong.”

The Ravens host the Browns this Sunday night in the first meeting between the teams since that December night. Like last season, the stakes are high. Baltimore leads the AFC North and Cleveland is in last place, but just 1 1/2 games separate the teams.

When they met in December, the Ravens were finally starting to return to form after a COVID-19 outbreak. They were outscored 22-13 in the fourth quarter but still won 47-42. Jackson came back in the game with Baltimore down by one, after backup Trace McSorley was injured on a third-down play. Jackson immediately threw a 44-yard touchdown pass to Brown, but then Baker Mayfield led Cleveland on a touchdown drive that tied it at 42.

Tucker's field goal broke the tie, and then there was one more bizarre twist. The Browns tried to lateral their way to an improbable winning touchdown, but instead they went backward into their own end zone. The safety made Baltimore's winning margin five points — the opening line had the Ravens favored by three.

Baltimore (7-3) has had several more escapes this season, including last weekend when Jackson was too ill to play. Backup Tyler Huntley led the Ravens to the winning touchdown in the final minute against Chicago.

Jackson is expected to return this weekend. His absence was just the latest near-crisis for Baltimore, which lost its top two running backs before the season even started. Brown also missed last weekend's game with a thigh problem.

“If you look back at what their potential starting roster and depth chart, and what it is now, to be where they are is extremely impressive," Mayfield said. “A lot of their games so far this year, they have come from behind. They are a very resilient team. That is just how they are led and coached.”

The Ravens and Browns (6-5) meet twice in the next three weeks. Cleveland actually plays two games in a row against Baltimore with its open date in between.

The Ravens have played only one AFC North team this season, losing 41-17 at home to Cincinnati on Oct. 24. Five of their final seven games are within the division.

“I have been in this division now for many years," Baltimore coach John Harbaugh said. "It really doesn’t really matter what the records are. It’s still always really, really tough to play these games. Yet now, everybody is above .500, and everybody is in it. And all the games are now at the end, between all of us, so it’s going to be pretty exciting.”

Cleveland’s top-ranked running game is back at full speed.

Kareem Hunt, one of the NFL’s best combo backs, returns after missing five games with a calf injury. In addition to being a quality changeup for star Nick Chubb, Hunt is one of the Browns’ best receivers and an underneath weapon for Mayfield.

The Browns' offense hasn’t been the same without Hunt, who is a threat to score from anywhere.

“I get ticked off when I can’t be out there to help if we’re not playing really well,” he said. “It’s out of your control when you’re on the couch.”

Ravens tight end Mark Andrews has been tough on the Browns with five touchdown catches in six career games. Cleveland’s coverage of tight ends has been an issue and will be tested by Andrews, who comes in with 56 catches for 696 yards and four TDs.

“He’s like Lamar’s safety blanket,” Browns safety John Johnson III said. “When things are going left, he’s going to look for (No.) 89. We’ve just got to understand that, be aware of it, know where he is on the field. … He’s been a big weapon the past couple years.”

Browns coach Kevin Stefanski, who has an affinity for tight ends, has high regard for Andrews, Mayfield’s teammate at Oklahoma.

“Very, very dependable,” Stefanski said. “Big, fast and great hands. Baker could probably give you a better scouting report than I could. He’s a problem. He’s hard to cover.”

Since their move from Cleveland created the new Baltimore franchise, the Ravens are 33-11 against the Browns. Harbaugh is 22-4 against Cleveland.

This will be the fifth night game of the season for the Ravens. They've split the first four. Harbaugh is 17-2 in prime time games at home.