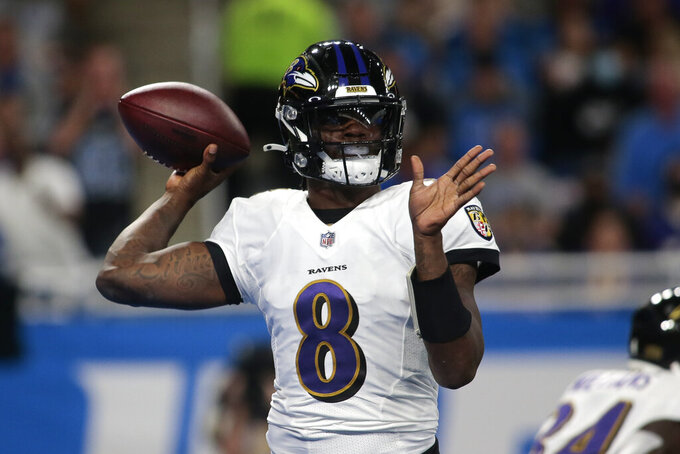 OPENING LINE: Ravens by 1, according to FanDuel SportsBook.

TURNOVER DIFFERENTIAL: Ravens minus-2; Broncos plus-3.

RAVENS PLAYER TO WATCH: WR Marquise Brown, who leads the Ravens with 15 catches for 235 yards and two touchdowns. But he’s coming off a rough game at Detroit in which dropped passes slowed the offense.

BRONCOS PLAYER TO WATCH: DL Mike Purcell. The Broncos are back to being one of the best run-stopping teams in the NFL and that coincides with the return of Purcell to the lineup. Denver's run defense fell apart last year when he broke a foot midway through the season.

KEY MATCHUP: QB Lamar Jackson vs. ILB Alexander Johnson. The Broncos have to contain the elusive Jackson whom coach Vic Fangio compared to “Barry Sanders playing quarterback.” The fulcrum of those hopes is Johnson, who's coming off a game in which had collected a career-best two sacks, two tackles for loss, two QB hits, one pass breakup and five tackles.

KEY INJURIES: Baltimore has been without RBs J.K. Dobbins and Gus Edwards, who were lost to knee injuries before the season. CB Marcus Peters also went down with a season-ending knee injury. … The Ravens activated WRs Rashod Bateman (groin) and Miles Boykin (hamstring) from IR this week. Baltimore also has LB Justin Houston and DLs Justin Madubuike and Brandon Williams back from the reserve/COVID-19 list.

SERIES NOTES: The biggest game between these teams was the double-overtime thriller in the AFC playoffs following the 2012 season, the one when Joe Flacco threw a 70-yard prayer to Jacoby Jones in the final minute of regulation and which the Ravens eventually won 38-35. But as Baltimore coach John Harbaugh noted, he also has some not-so-good memories in Denver, including watching Peyton Manning throw a record-tying seven TD passes in the 2013 opener that the Broncos won 49-27.

STATS AND STUFF: The Ravens have a chance to tie an NFL record with their 43rd consecutive game of at least 100 yards rushing. Pittsburgh set that mark from 1974-77. … Baltimore has also scored at least 14 points in 46 consecutive games, the second-longest streak in NFL history behind New England’s 63-game run from 2009-13. … Ravens QB Lamar Jackson has either a rushing or passing TD in 39 straight games, the longest active streak in the league. ... QB Teddy Bridgewater is the only quarterback in the NFL who has completed at least 75% of his passes in each of his first three games. If he does it again Sunday, he'll join Tom Brady (2007) as the only QB to complete three-fourths of his throws in each of his team's first four games. ... RB Javonte Williams ranks second in the league among rookies with 177 scrimmage yards and 138 rushing yards. He had his first career TD but also a fumble at the 1 last week. ... WR Tim Patrick had five catches for team-high 98 yards last week and is the only player since the start of the 2020 season with 85 or more targets and zero drops. ... OLB Von Miller is the only player in the AFC with sacks in each of the first three weeks of the season. At age 32, Miller earned his fourth AFC Defensive Player of the Month honor and his first since 2016.