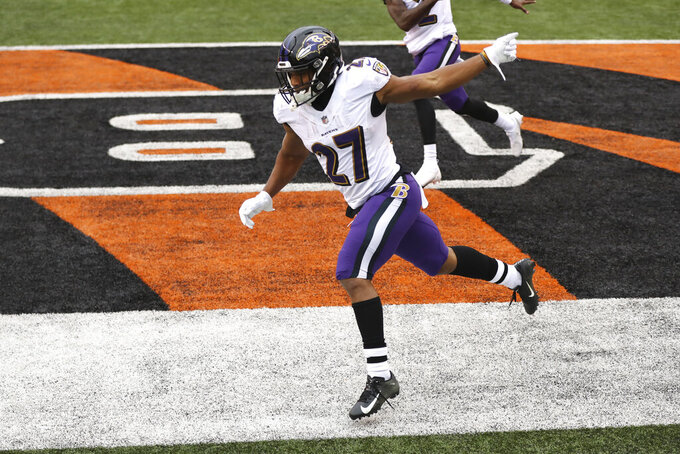 Baltimore Ravens running back J.K. Dobbins (27) celebrates after scoring against the Cincinnati Bengals during the second half of an NFL football game, Sunday, Jan. 3, 2021, in Cincinnati. (AP Photo/Aaron Doster)

J.K. Dobbins knew his spectacular career at Ohio State provided no guarantee that he would immediately become an NFL star.

Dobbins was the first Buckeyes running back to rush for 1,000 yards as a freshman, sophomore and junior. He finished with 4,459 yards on the ground — second most in school history — and scored 43 touchdowns for the Big Ten powerhouse before leaving with one year of eligibility remaining.

Drafted in the second round last April by the Baltimore Ravens, Dobbins arrived at training camp fourth on the depth chart behind Mark Ingram, Gus Edwards and Justice Hill.

“My expectation was to come in and play," Dobbins said. “I'm not going to pull the rookie card and say, ‘Oh, I’m a rookie. I’m just going to wait this out and be patient.’ That’s not me.'"

So, he worked hard and did his best whenever he got the chance to carry the football — which wasn’t often during the first six weeks of the season. At that point, he had 25 attempts for 154 yards, which pretty much amounted to a typical Saturday afternoon for Dobbins at Ohio State.

Dobbins never got down on himself, even when he had just one carry (for 34 yards) in an October game against Cincinnati.

“That was one of the growing points of my career, because I’ve always been able to work so hard and be able to play right away,” Dobbins said.

“So, that was such a process for me. But I always saw it as just keep learning, keep watching film, keep learning things to do to get better, even though I was only getting one carry. That carry that I got, I made my mind up that I’m going to go hard."

The rookie stayed the course, and his diligence and patience have paid off. Dobbins has scored in each of his past six games, and on Sunday he rambled for 160 yards and two touchdowns in Cincinnati.

He is now the featured running back for the playoff-bound Ravens, who open on the road Sunday against AFC South champion Tennessee. For Dobbins, everything turned out exactly as planned.

“As soon as they drafted me, my thought process was, ‘Let’s go in here, let’s get better, and I’m going to find a way to get on this field and help this team win as many games as possible — get us to a Super Bowl, if that’s possible,’" Dobbins said. “And that’s just what I’ve been doing.”

At 5-foot-10 and 212 pounds, Dobbins has the ability to squeeze through a tiny hole and the strength to bust a tackle or two if met at the line. He also has the speed to whisk past pursuers in the open field, a feature he put on full display during a 72-yard touchdown run against the Bengals.

“I'm not 6-3, 250, so people kind of want to label me as a scatback or something like that, but no, that’s not me," Dobbins said. “I can get in there and mix it up with the big guys a little bit. I can be a little powerful. I take pride in not just being a running back, but an offensive weapon."

Dobbins is so slick that he's even impressed Ravens quarterback Lamar Jackson, an elusive runner with his own impressive set of moves.

“Being honest, he’s just explosive," Jackson said. “I’ll be on the field (watching him) and I’m like, ‘Bro, you are unbelievable with the ball.’ Then I’m like, ‘He might get hit right there,’ and then he’ll just do something crazy. That’s why he’s out there. He’s just doing amazing things."

Despite the slow start and missing a game in December while on the reserve/COVID-19 list, Dobbins finished his first NFL season with 805 yards rushing, averaging a robust 6 yards per carry. He set a Ravens rookie record for touchdowns with nine, and his six straight games with at least 50 yards on the ground and a rushing TD is tied for the longest streak by a rookie since the 1970 merger.

“He’s been working for his opportunity and growing and learning," Baltimore coach John Harbaugh said. “He’s done a great job and he’s got a great attitude. We love him as a person and as a player.”

Harbaugh isn't the only NFL coach to be impressed with Dobbins' development. Mike Vrabel of the Titans knows he will be seeing a better back than the one who rushed for 70 yards on 15 attempts against Tennessee on Nov. 22.

“The more carries you get, the more confidence you get," Vrabel noted. “You get a better feel for how things are going to be blocked, and how runs may break, where the cut may be. It seems like he's playing with a greater confidence level."