For Ravens, there is no meaningless game against Steelers 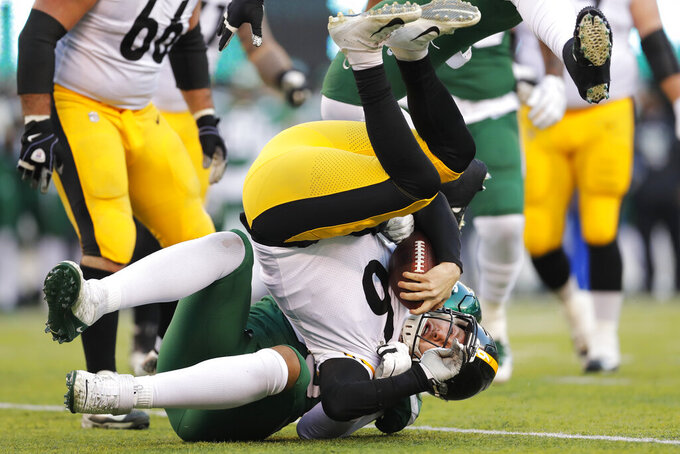 BALTIMORE (AP) — The Baltimore Ravens have already clinched the top seed in the AFC playoffs and will rest several key starters, including quarterback Lamar Jackson, in Sunday's regular-season finale.

That doesn't mean the Ravens don't have plenty of incentive to beat the division rival Pittsburgh Steelers. Anyone who has the audacity to suggest that Baltimore won't be 100 percent locked in must answer to 345-pound defensive tackle Michael Pierce.

“It's the Pittsburgh Steelers. They’re fighting for a shot in the playoffs, so never,” Pierce said, quite emphatically. “We have history with those guys, so no. If anybody tells you otherwise, we should have a talk."

Robert Griffin III will get his first start at quarterback since 2016, but the man known as RG3 doesn't want this game to be about him. It's about beating those darn Steelers.

“They have everything to play for, and they have great players," Griffin said. “So really, the focus is just on executing at a high level."

Pittsburgh (8-7) can get in with a loss, but that would require a variety of scenarios to fall into place. The simplest formula for the Steelers is to beat the Ravens while Tennessee loses to Houston.

“We are not worried about the myriad of scenarios that are capable of being discussed this week. We understand the position that we are in," coach Mike Tomlin said. “We made the bed, we are willing to lay in it. The only thing that we can do this week is prepare for this game and go beat Baltimore. So that is our agenda, that is our focus."

The Steelers lost to Baltimore in overtime, 26-23, on Oct. 6. That got the Ravens started on a winning streak that has left them with the best record in the NFL and the luxury of resting their best players in Week 17. But it's important to take some momentum into the playoffs.

Steelers rookie quarterback Devlin “Duck” Hodges achieved cult hero status while leading the team to a 4-1 record in his first five appearances. Reality, however, has caught up with the easygoing 23-year-old. He’s thrown six interceptions over his past two games and is starting against the Ravens only because Mason Rudolph’s season is over after he hurt his left shoulder last week in a 16-10 loss to the New York Jets.

“I just have to take a step back to how I was playing those first couple of games and taking what the defense gives me,” Hodges said. “I have all of confidence in the world in myself and the guys, and I just have to go out and do it.”

The Ravens need 93 yards rushing to set a new single-season mark, eclipsing the 3,165 yards on the ground amassed by the 1978 New England Patriots.

“To beat this team, we’re going to have to run the ball well. If we run it for 93 yards, I think that would be good," said Gus Edwards, who will start in place of Ingram. "We’re focused on winning more than anything. But to have the record would be nice, as well.”

“We're trying to go win a game, so whether we break that record or not, it doesn't matter to us,” he said. “But it's part of our recipe of winning."

The Steelers have grown accustomed to facing running quarterbacks this season. They’ve already faced Jackson — keeping him largely under wraps in Week 5 in which Jackson’s long run was all of 9 yards. In addition, Pittsburgh in recent weeks has gone up against Arizona’s Kyler Murray and Buffalo’s Josh Allen. Griffin’s resume is limited but he is 0-2 against the Steelers, a loss in 2012 as a rookie with Washington and another defeat in 2016 while suiting up for Cleveland.

“I haven't seen him play in a while,” Pittsburgh defensive end Cam Heyward said. “But he's mobile. He's got a good arm and he can make things happen. We've been dealing with tests every week trying to prepare for these mobile quarterbacks. But these guys can still throw the ball down the field.”

Ravens cornerback Brandon Carr won't be among those rested, so it appears likely he will extend his streak of consecutive starts to 192 — the NFL's longest active run by a defensive player.

The streak began when he played the opener as a rookie with the Chiefs in 2008.

“He’s a pro’s pro," Ravens defensive coordinator Don Martindale said. “When I say that, he takes care of his body religiously. He studies the game. And he has a confidence when he goes out there because of all the work that he’s put into it.”