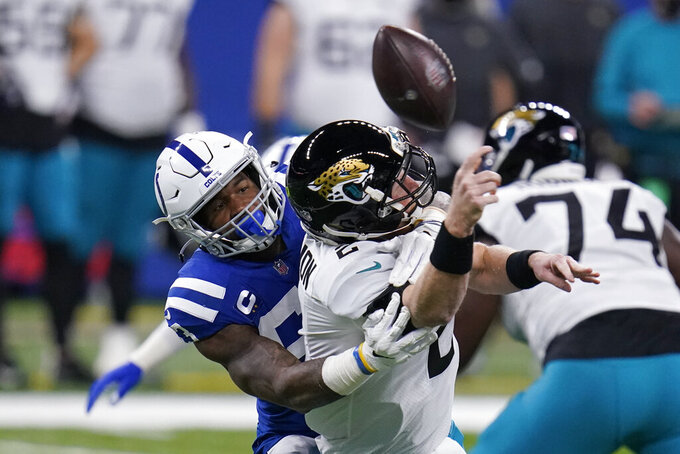 Jacksonville Jaguars quarterback Mike Glennon (2) fumbles the ball as hit by by Indianapolis Colts' Darius Leonard (53) during the first half of an NFL football game, Sunday, Jan. 3, 2021, in Indianapolis. (AP Photo/Michael Conroy)

INDIANAPOLIS (AP) — From the start of training camp, Frank Reich kept insisting the Indianapolis Colts were a legitimate playoff team — and a real Super Bowl contender.

He didn't waver when the running game got bogged down early in the season or when injuries took down one key contributor after another. He continued to believe even after the Colts blew a 17-point third-quarter lead at Pittsburgh, putting Indy on the precipice of missing the postseason. And Reich remained hopeful his former team, the Buffalo Bills, could come through and help out Indianapolis on Sunday afternoon.

They did. And now, Reich insists Indy is ready to shake things up in the AFC.

“We should be loose, we should be aggressive, we should be able to play our best football game of the year because no one’s going to give us a chance," he said Monday, less than 24 hours after securing the No. 7 seed with a 28-14 victory over Jacksonville. “It's the us- against-the-world mentality. If you were around the team like I am day in and day out, you’d understand where I get the confidence to think we can beat anyone in this tournament."

It's a refrain Reich has repeated frequently this season. As one of those who played on all four of Buffalo's Super Bowl teams, he has some semblance of what is needed to win playoff games.

He has an experienced quarterback in Philip Rivers, who has played his most efficient football during the second half of the season. He sees the running game surging at the right time, and a run defense that allows 90.5 yards, the second-stingiest average in the league.

“It starts with what we believe, we have the team to win it all," he said. “We've got the right players, the right coaches and the belief and confidence in each other to win it all. I can tell you on a personal note, in my 26 years in the NFL, I’ve been on teams that have won 11 games eight times. Six of those eight went to the Super Bowl.”

The ground game. Even before Jonathan Taylor rushed for 253 yards Sunday, the Colts' runners were churning out yards at a pretty good clip. They had 575 yards in the previous four weeks and now they're up to 848 yards. That's an average of 169.3, in their last five outings.

Takeaways. While the Colts have been among the league's best at forcing turnovers, the pace has slowed considerably over the last three weeks. Indy has only three takeaways and no interceptions during that stretch.

Taylor. As other rookies struggled late in the season, Taylor seemed to crank it up. Over the last six games, he's averaging 86.3 yards rushing, 4.4 yards per carry, and has scored eight TDs while becoming Indy's workhorse.

TE Trey Burton. At one point, it appeared Burton might emerge as one of Rivers' top receivers. Instead, Burton didn't have a pass thrown his way Sunday and he has five receptions for 37 yards in the last five games.

Reich said the Colts suffered no significant injuries against Jacksonville. It appears veteran Jared Veldheer will continue to fill in for the injured Anthony Castonzo at left tackle. Reich remains hopeful starting safety Khari Willis and starting cornerback Rock Ya-Sin will clear the concussion protocol this week. Running back Jordan Wilkins went on the reserve/COVID-19 list prior to Sunday's game.

31 — Officially, the Colts' pass defense is ranked No. 20. Recently, though, it's been lagging. Indy is ranked No. 31 against the pass since Week 11 — a number that needs to improve dramatically to have a chance in Buffalo.

From 1970-2001, the Colts and Bills met twice a year as AFC East rivals. This will be the first time they've squared off in the playoffs and Reich is eager to see how they stack up.