Rivers looks to rebound from 2 interceptions in Colts opener 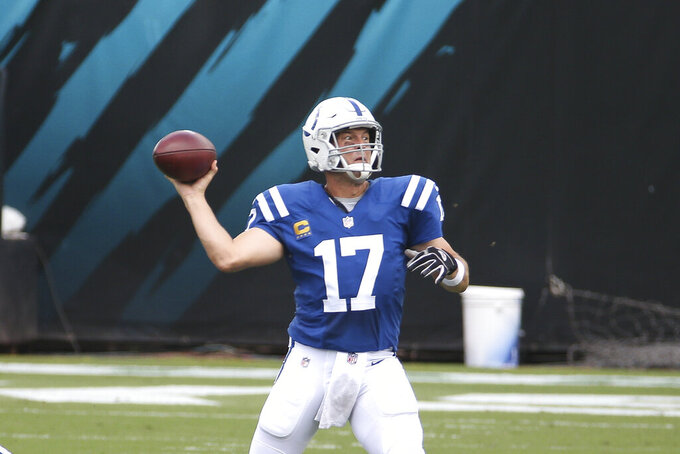 Indianapolis Colts quarterback Philip Rivers (17) throws a pass during the first half of an NFL football game against the Jacksonville Jaguars, Sunday, Sept. 13, 2020, in Jacksonville, Fla. (AP Photo/Stephen B. Morton)

INDIANAPOLIS (AP) — Throwing two interceptions and missing an open receiver for a potential touchdown will never cut it in Philip Rivers' world.

“It applied the other day in the game, after an interception, shoot, after that first-drive touchdown," Rivers said Wednesday. “That touchdown's gone and we have to begin again. I do think it (the philosophy) resonates in this locker room, and I think it resonates in life in general. You're always beginning again."

Whatever approach Rivers has developed through the years, it's worked.

During a remarkably resilient 17-year career, he's reached the playoffs six times, won 123 games, made 225 consecutive starts and thrown 398 touchdown passes — though he insists it would be 399 if he had spotted Jack Doyle in the end zone Sunday. Of Rivers' 229 games played, he's thrown multiple interceptions in 55 but logged two or more interceptions in back-to-back weeks just 17 times, including four three-game streaks.

Still, Rivers understands what he must do to prevent the Colts from an 0-2 start.

“It is part of life in the NFL, you hope there’s just not very many (interceptions),” he said. “And while there’s been more than I would have liked the past handful of years, overall in my career it hasn’t been a issue and I don’t expect it to be this year, either, moving forward.”

Coach Frank Reich believes last weekend's miscues at Jacksonville weren't all Rivers' fault — not even the first interception. For instance, he blamed a poor play call that put the Colts in a bad formation that put a defender in a spot Rivers didn't anticipate.

The problematic part: Rivers has now thrown multiple interceptions in seven of his last 13 games. At age 38, it will only spur more debate among the critics about Rivers' arm strength.

Reich isn't worried. He's repeatedly said there's no difference between Rivers today and the one he first worked with in San Diego from 2013-15. Rivers' other numbers from last weekend — 36 of 46 with 363 yards and one TD — appear to back up Reich's argument. He even picked up a first down by masterfully drawing Jacksonville offside with 1 second left in the third quarter.

“Philip made some unbelievable plays on third down, some plays to keep drives alive," Reich said after the opening-day loss. “I have no concerns about Philip. We have to play better on offense.”

Clearly, a more balanced attack than the 46 throws compared with 22 runs last weekend could help. More points and playing from the lead would, too.

Having a full complement of healthy receivers also would be beneficial. Pro Bowl tight end Doyle and receiver Zach Pascal both missed Wednesday's practice. Doyle was out with an ankle/knee injury, while Pascal sat out with an injured ankle.

But Sunday's home opener against Minnesota (0-1) should help Rivers rebound, too.

A week ago, two-time MVP Aaron Rodgers carved up the Vikings' young secondary, going 32 of 42 with 364 yards, four TDs and no interceptions.

And while Minnesota coach Mike Zimmer, widely regarded as a defensive guru, usually schemes his way to success, the Vikings are a team in transition. Defensive tackle Michael Pierce opted not to play this season because of COVID-19, and defensive end Danielle Hunter will miss his second straight game with an undisclosed injury.

The combination, and Rivers' short memory, could be exactly what Rivers — and the Colts — need to create a new chapter in their 2020 log.

“I’m still aggravated about last week to be honest with you," he said. “I have moved on but still a little bit aggravated, which hopefully a little bit of that saltiness can carry over into us playing better this week. Ultimately, it’s really about winning."