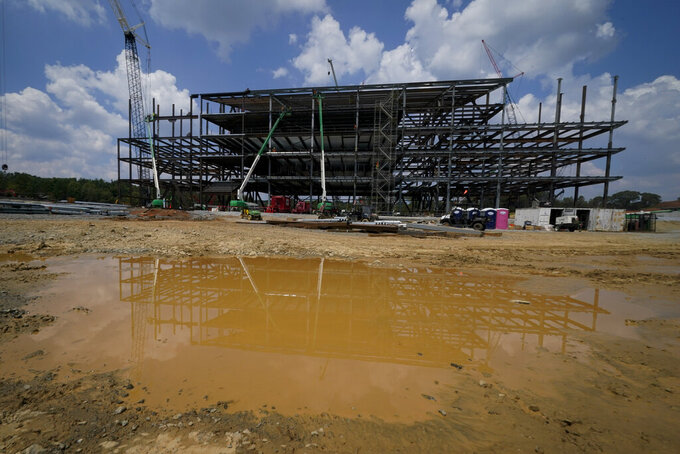 Construction personnel work on Carolina Panthers' state-of-the-art team headquarters and practice facility Tuesday, Aug. 24, 2021, in Rock Hill, S.C. "The Rock" will host all of the team's offices and training/locker room facilities, along with three outdoor grass practice fields, one indoor artificial field and another outdoor artificial field that is part of a 5,000-seat multipurpose stadium that can also be used to host high school football and soccer games, concerts, car shows and much more. (AP Photo/Chris Carlson)

Just over the South Carolina state line in Rock Hill, steel support beams are emerging from the ground on a rocky, dusty 240-acre plot of land. Dug-up boulders have been cast into a huge pile, construction vehicles scurry about and large cranes hoist metal beams into place on a site that the workers call “The Rock” because the architectural design of the building was meant to depict the image of a rock jutting out of the ground.

The prized idea of Panthers billionaire owner David Tepper, the entire project (including added highway infrastructure) is approaching $800 million in public and private money to build and is expected to rival that of the Dallas Cowboys and Minnesota Vikings, arguably the best team headquarters in the NFL, when it is completed in 2023.

“The Rock” will host all of the team's offices and training/locker room facilities, along with three outdoor grass practice fields, one indoor artificial field and another outdoor artificial field that is part of a 5,000-seat multipurpose stadium that can be used to host high school football and soccer games, concerts, car shows and more.

So, while the Panthers will continue to play home games at Bank of America Stadium in Charlotte, North Carolina, everything else club-related will be at “The Rock," including practices and training camp.

Mark Hart, vice president and chief operating office of the Panthers and Tepper Sports Entertainment, said the facility is designed to help the Panthers win a Super Bowl.

“The Rock is primarily for the Carolina Panthers to be more efficient and gain a competitive edge, keep players and attract players, and have the best coaching staff and the best facilities," Hart said. "When David Tepper got here, I think he said whatever the other teams have, we don't have. Well, we have flipped the narrative.”

When Tepper took over as the team's owner in 2018, the Panthers didn't have an indoor practice facility.

After the headquarters are complete, there will still be about 75 acres of available land on the property tagged for hotels, retail shops, restaurants, office buildings, residential living and a premier medical facility, along with bike and walking paths.

That means there will be plenty of people mingling around — even during practice.

Hart said while that may create some angst for Panthers coaches who may prefer secrecy, it was important for Tepper that fans “feel connected” to the team and have a place to work, live and play.

"We don't want this to be a NSA cybersecurity lockdown place," Hart said.

Hart said the Panthers hope to attract people not only from the Southeast but all around the country to visit.

The 600,000-square-foot structure is five stories high and will include 8,875 total tons of structural steel, more than 75 miles of PVC conduit, 2.5 million feet of wire and 4,145 light fixtures. There are more than 340 workers on site, but those numbers will increase to 800 at maximum workforce, and the team is using 118 area firms as part of the project.