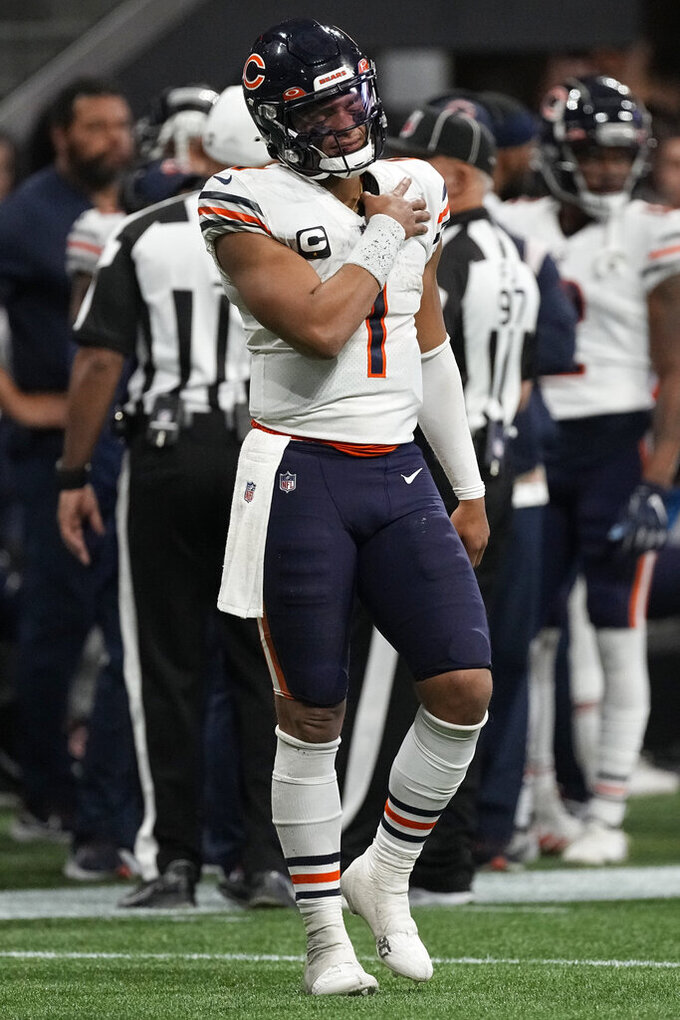 Chicago Bears quarterback Justin Fields (1) holds his shoulder after a Atlanta Falcons tackle during the second half of an NFL football game, Sunday, Nov. 20, 2022, in Atlanta. The Atlanta Falcons won 27-24. (AP Photo/John Bazemore)

LAKE FOREST, Ill. (AP) — Aaron Rodgers turned toward the crowd after scrambling for a dagger touchdown at Soldier Field last year and landed a verbal haymaker for good measure.

Rodgers will get a chance to show again that he still owns Chicago when the Green Bay Packers visit the Bears on Sunday.

“WGN was one of the few channels we had on our TV, so I grew up watching Cubs games and Bulls games, so I’ve been a fan of Chicago sports for a while," he said. "I have a lot of respect for the city and the legacy of excellence that the team and the region has.”

Rodgers also has a knack for sticking it to the Bears. And he has done it more than a few times at Soldier Field.

There was a win in the 2011 NFC championship game en route to the Super Bowl 45 championship and that meeting in 2016 when the Bears rallied from 17 down in the fourth quarter to tie it. The Packers came out on top 30-27 when Rodgers hit Jordy Nelson with a 60-yard pass to set up Mason Crosby’s field goal as time expired.

As for where last year ranks on his list of big moments at Soldier Field? Rodgers puts it nowhere near the top.

Rodgers has owned the Bears throughout his career, with a 24-5 record against them, counting the playoffs. The NFL's oldest rivalry has been a one-sided affair in recent years with Green Bay winning seven straight.

The Packers (4-8) are banking on that to continue with their playoff hopes hanging by a thread. They've dropped seven of eight after losing 40-33 to NFC East-leading Philadelphia last week.

Rodgers exited that game with a rib injury. He also has been playing with a broken right thumb he suffered on the final play of a 27-22 loss to the New York Giants in London on Oct. 9.

The Bears (3-9), meanwhile, have lost five in a row. But it looks like they will have quarterback Justin Fields back after he missed last week's game at the New York Jets because of a separated left shoulder.

Fields was a full participant in practice Friday for the second straight day and was listed without a designation on the team’s final injury report. He separated his non-throwing shoulder and suffered some ligament damage in the AC joint when he was tackled on a designed run late in Chicago’s loss at Atlanta two weeks ago.

The Packers allowed 363 yards rushing last week, the most they’d given up in a single game since 1977. Jalen Hurts rushed for 157 yards, the highest single-game total ever by an Eagles quarterback.

Coach Matt LaFleur said Green Bay had more than 20 missed tackles in that game and called it “by far our worst tackling performance that I’ve seen here.”

Now, the Packers' 31st-ranked run defense must deal with a Bears offense featuring the mobile Fields, assuming he plays.

Even if he can’t go, the Bears’ rushing attack still could bother Green Bay. Chicago’s David Montgomery rushed for a season-high 122 yards on 15 carries in the Bears’ 27-10 loss at Green Bay in Week 2.

Fields wasn't the only banged-up Bear.

Pringle has been limited to six games because of a calf injury in his first year in Chicago, though he caught his first touchdown last week. Claypool had his best outing since a trade from Pittsburgh on Nov. 1, with catches of 31 and 20 yards.

“I think we’re gonna have to spread the ball around,” coach Matt Eberflus said. "Obviously, Mooney is a dynamic player. He’s had a good chemistry with Justin and the rest of the quarterbacks, and I think we’ve got to do it by committee, using all of them the best way we can based on their skillsets.”

Both the Packers and Bears are well below .500, but there’s still plenty at stake Sunday from a historical perspective.

The teams each have 786 regular-season wins to share the NFL lead. The winner of Sunday’s game earns sole possession of first place, at least for one week.

Packers receiver Christian Watkins has caught six touchdown passes in his last three games. The second-round pick out of North Dakota State is the first Packers rookie to have a touchdown catch in three straight games since Billy Howton in 1952.

It’s a remarkable surge for Watkins, considering his only touchdown before this three-game stretch came on a 15-yard run in a 27-24 overtime victory over the New England Patriots on Oct. 2.

The Bears were hardly dominating on defense when they had Robert Quinn and Roquan Smith. And things haven't gotten any better since they were traded.

Chicago has been hit hard by injuries to the secondary, and a failure to generate pressure has left the team tied with Las Vegas for a league low with 16 sacks. The Jets' Mike White threw for 315 yards, the most by one quarterback against the Bears this season.