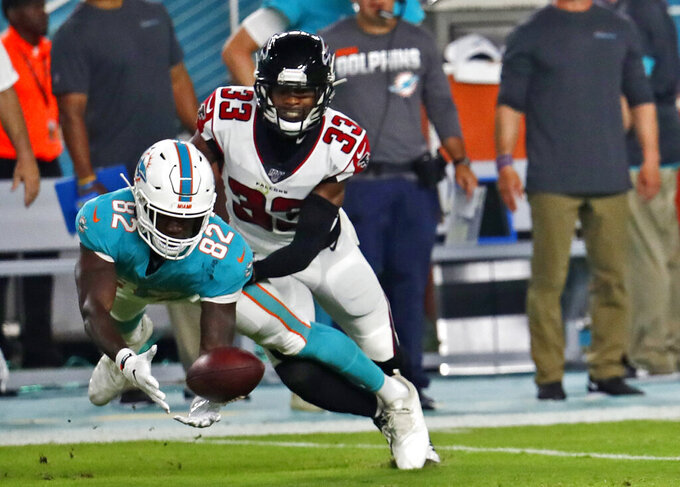 MIAMI GARDENS, Fla. (AP) — Josh Rosen kept going down and getting back up.

Bidding for a starting job, Rosen overcame shaky protection to throw for 191 yards and direct three scoring drives of more than 60 yards to help the Miami Dolphins win their exhibition opener Thursday against the Atlanta Falcons, 34-27.

Rosen went 13 for 20 with no touchdowns and one interception and played half the game. He shook off more than half a dozen hits as Falcons reserves manhandled the Dolphins' backups in the offensive line.

"That's football," Rosen said. "We're all working on things. It's a physical game."

Rosen is competing for the quarterback job with veteran Ryan Fitzpatrick, who worked the first two Dolphins series and led them to a field goal. Fitzpatrick completed 2 of 5 passes for 20 yards.

Atlanta backup Matt Schaub threw for 172 yards and led the team to four scores in the first half.

"He really managed the game in the way we wanted," coach Dan Quinn said. "He delivered the ball on time to the right guys."

Schaub went 12 for 19 with no touchdowns or turnovers for the Falcons (0-2), who have lost 10 consecutive exhibition games since 2017.

Starting quarterback Matt Ryan was given the night off, a decision made partly because pregame rain made the field slippery.

"We decided that, for a couple of guys and not only him, we would wait in their best interests" until later preseason games, Quinn said. Most Atlanta first-teamers saw little or no action.

Undrafted Preston Williams, who has been Miami's best rookie in training camp, caught four passes from Rosen for 97 yards. That included a one-handed catch for a 36-yard gain.

"Preston can go get the ball," Rosen said.

The Dolphins sat a few of their first-teamers, and most were out of the game by the end of the first quarter.

Running back Kenjon Barner broke two tackles and turned a short Schaub pass into a 37-yard gain that set up an Atlanta touchdown. Barner is competing for the backup job behind Devonta Freeman.

Schaub went 7 for 8 for 77 yards on the Falcons' first possession, a 90-yard touchdown drive that took more than 8½ minutes. Schaub, 38, is the front-runner to be Ryan's backup for the fourth consecutive season.

"I love what I'm doing, and the team believes I can do it," Schaub said. "I believe I can still do it, and so that's why I'm here."

"The pick was pretty bad," Rosen said. "There was some good, some bad and everything in between."

Dolphins receiver Kenny Stills, who has been kneeling during the national anthem since 2016, did so again. On Wednesday, Stills was critical of Dolphins owner Stephen Ross' plans to host a fundraiser Friday for President Trump.

Falcons: play at home against the New York Jets next Thursday.

Dolphins: play at the Tampa Bay Buccaneers on Aug. 16.