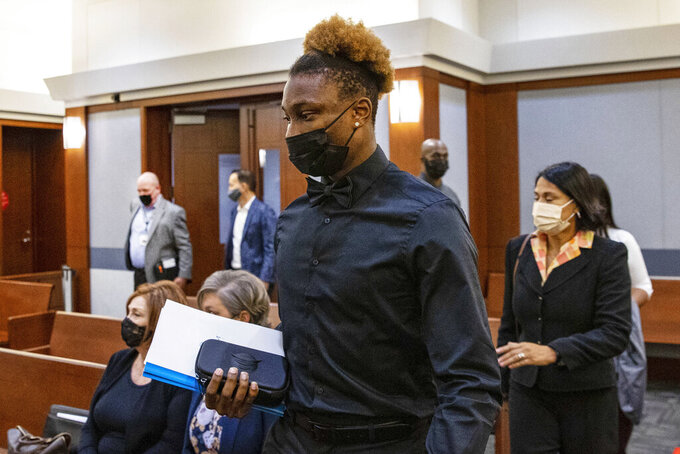 FILE - Former Las Vegas Raiders wide receiver Henry Ruggs arrives in court for a hearing at the Regional Justice Center in Las Vegas on Nov. 22, 2021. A court hearing was postponed Wednesday, Oct. 12, 2022, in the case alleging Ruggs caused a fatal crash while driving his sports car drunk at 156 mph last November on a residential street. A prosecutor and defense attorney told a Las Vegas judge that a crucial police report has not been completed about the rear-end wreck last Nov. 2 that sparked a fire that killed 23-year-old Tina Tintor and her pet dog, Max. (Bizuayehu Tesfaye/Las Vegas Review-Journal via AP, Pool, File)

Justice of the Peace Ann Zimmerman on Wednesday scheduled a preliminary hearing for Feb. 1, after Ruggs defense attorney David Chesnoff asked for time to investigate and possibly challenge elements of a police report that he said he received since last month.

Chesnoff termed the report “quite extensive and exhaustive.” He declined outside court to say what parts he and attorney Richard Schonfeld might fight.

Prosecutor Eric Bauman told The Associated Press it is unusual for 15 months to pass between an arrest and a preliminary hearing, at which a judge determines if a case will go to trial in state court.

“But this is an unusual case,” Bauman said. “The defendant has excellent attorneys who are going to make the state earn every inch.”

Ruggs’ lawyers have lost several legal challenge since the crash last Nov. 2 and the arrest of the 23-year-old former first-round draft pick.

Ruggs and his girlfriend, Je’nai Kilgo-Washington, were in his vehicle and both were hospitalized following the predawn wreck on a city street that sparked a fire that killed 23-year-old Tina Tintor in her vehicle.

Ruggs is accused of having a blood-alcohol level twice the Nevada legal limit and faces multiple felony driving under the influence and reckless driving counts. He also faces a misdemeanor gun possession charge after police reported finding a loaded handgun in his demolished Chevrolet Corvette. Charges against him carry a mandatory two years in prison if he's convicted, and possibly more than 50 years.

Chesnoff and Schonfeld have argued that police didn’t have probable cause to ask a judge for a warrant to obtain Ruggs’ blood. They also tried to block doctors from being able to tell what Ruggs told them about the crash or his injuries.

Ruggs’ lawyers also said they have witness accounts suggesting that firefighters were slow to extinguish the fire.

Ruggs did not attend Wednesday’s hearing. He has been on house arrest for more than 11 months on $150,000 bail and strict conditions including alcohol checks.

A lawyer for Tintor’s family did not immediately respond Wednesday to messages about the new court date.

Ruggs was drafted out of Alabama in 2020 and signed a four-year contract with the Raiders that was reported to be worth more than $16 million. The team released Ruggs several hours after the crash.