Saints want no more lawsuit on the playoff's 'NOLA no-call' 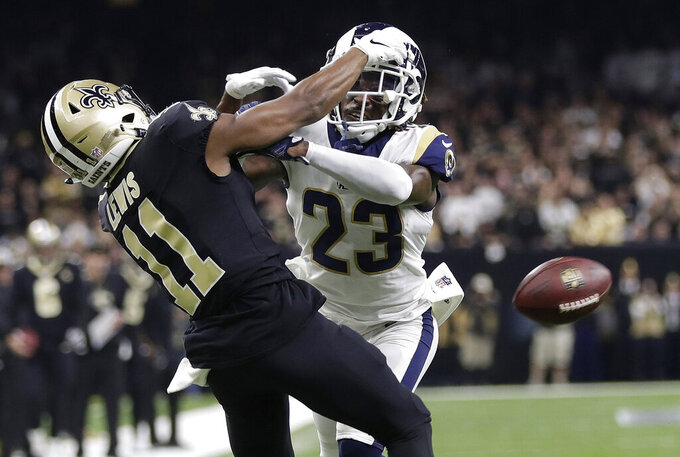 FILE - In this Jan. 20, 2019, file photo, Los Angeles Rams' Nickell Robey-Coleman breaks up a pass intended for New Orleans Saints' Tommylee Lewis during the second half of the NFL football NFC championship game in New Orleans. They were badly burned by the “Nola no-call,” but the New Orleans Saints have joined the NFL in opposing a fan’s lawsuit seeking damages over the missed penalty that helped the Los Angeles Rams beat the Saints in a January playoff game and move on to the Super Bowl. (AP Photo/Gerald Herbert, File)

NEW ORLEANS (AP) — They were badly burned by the "Nola no-call," but the New Orleans Saints have joined the NFL in opposing a fan's lawsuit seeking damages over the missed penalty that helped the Los Angeles Rams beat the Saints in a January playoff game and move on to the Super Bowl.

The lawsuit by attorney and self-proclaimed fan Anthony LeMon resulted in a state judge's recent order that NFL Commissioner Roger Goodell and three game officials submit to questions in September. The league appealed to the Louisiana Supreme Court on Wednesday night. And attorneys for the Saints filed an accompanying brief supporting the league.

At issue is officials' failure to call a roughness or pass interference penalty on Rams cornerback Nickell Robey-Coleman for his helmet-to-helmet hit on receiver Tommylee Lewis well before a pass arrived during the NFC Championship game. The Rams won that game and advanced to the Super Bowl, where they lost to the New England Patriots.

"As the Saints have expressed, no team should be denied the opportunity to reach the title game (or simply win a game) based on the actions, or inactions, of those charged with creating a fair and equitable playing field," Saints attorneys say in the brief. They go on to say that the team has sought rules changes aimed at addressing such possibilities.

However, the brief says, allowing the suit to proceed would be wrong.

"While the Saints appreciate the fervor and dedication of their deep and passionate fan-base, allowing such claims to proceed in court would open the door to countless legal claims brought by passionate sports fans that would inundate the courts and overburden sports leagues and their member teams, including the Saints," the brief says.

LeMon, who filed with three other ticket-holders, answered the Saints and the NFL in a brief Thursday, noting that no other such suits are pending in the state court where he filed, and arguing that the circumstances of the game — and his lawsuit — are unique. The suit isn't simply filed over a missed call, his filing said. Among its allegations are claims that fraud and "implicit or unconscious bias" on the part of game officials from the Los Angeles area led to the decision not to flag the penalty.

"We can assure you that the four ticketholders who initiated this lawsuit, including me, are passionate fans and do not want to cause any harm to the Saints organization," LeMon wrote in an emailed statement.

The NFL's filing asks the high court to halt proceedings in the lawsuit and grant a quick review of the case, which state Civil District Court Judge Nicole Sheppard of New Orleans allowed to proceed. NFL attorneys argue that LeMon and his fellow plaintiffs — all game ticket-holders — have no right of action under Louisiana law.

"Plaintiffs' Petitions clearly seek legal redress for their frustration and disappointment with the outcome and rule-administration of a ticketed event, and the law is clear that ticket-holders lack a right of action to do so," the NFL's brief says.

LeMon counters that the suit isn't about unhappiness with the outcome of a fairly played game, or a simple error by officials. "It is an entirely different situation when an NFL official clearly observes an infraction and purposely does not call a penalty," his filing said.

LeMon's lawsuit was crafted to avoid the NFL being able to move it to federal court, where three other lawsuits over the game have been unsuccessful.

"This lawsuit is very different from any other ticketholder lawsuit that has ever been filed against the NFL because it is based on the unique laws in Louisiana, rooted in the Napoleonic Code, which exists only in Louisiana," LeMon added in his emailed statement.

One way of keeping it in state court was to keep damages low at $75,000. LeMon has said he intends for any money won to go to former Saints star Steve Gleason's charity to aid people with neuromuscular diseases. Gleason was diagnosed with ALS in 2011.