Seahawks get Diggs back, expect Clowney to play vs. Eagles 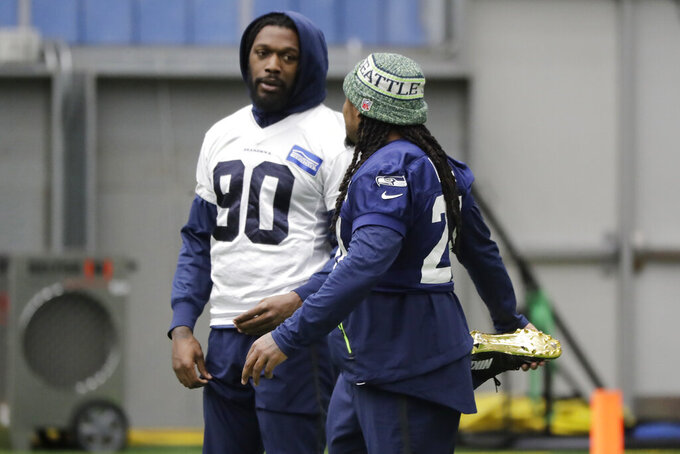 RENTON, Wash. (AP) — The Seattle Seahawks defense will get a big boost as both safety Quandre Diggs and defensive end Jadeveon Clowney will play in the opening round of the playoffs on Sunday against the Philadelphia Eagles.

Diggs had been expected to return after missing the final two games of the regular season with a high-ankle sprain. He has been a full participant in practice this week but there was uncertainty about Clowney and his ongoing issues with a core muscle injury.

Clowney played in the regular season finale against San Francisco and was in for 66% of the defensive plays. But his impact was limited, as it has been since he first suffered the injury in Week 10 against San Francisco in the first meeting between the teams. Clowney had just one tackle last Sunday.

He was still dealing with the injury and did not play when Seattle played in Philadelphia in late November.

“We're just getting him to game time is all that we can get done right now," Seattle coach Pete Carroll said. “He worked today, he got his reps in today and was able to demonstrate the game plan and knew what was going on. If this is what we've got, this is what we've got. We've got to work with it.”

Carroll said Marshawn Lynch had no problems bouncing back from his first game action in 14 months and will be part of Seattle's game plan. Lynch was in for 23 plays last week against San Francisco and had 12 carries, and is likely to again be in a complementary role with rookie Travis Homer.

Seattle listed left guard Mike Iupati and wide receiver Jaron Brown as questionable. Iuptai has been dealing with a neck stinger and is a game-time decision. Brown suffered a knee sprain last week but recovered quickly and was expected to practice Friday before leaving town to deal with a family issue, Carroll said. Brown's status could be important since Seattle is thin at wide receiver. Malik Turner has already been ruled out due to a concussion suffered in Week 16.

Seattle also ruled out left tackle Duane Brown. Brown underwent minor knee surgery two weeks ago and Carroll held out a slight bit of hope Brown would be able to recover in time for this week. George Fant is likely to get his second straight start at left tackle.

“He's still feeling the effects of the surgery. The challenge is to get through the swelling and he's not bad, but he's working through that," Carroll said.