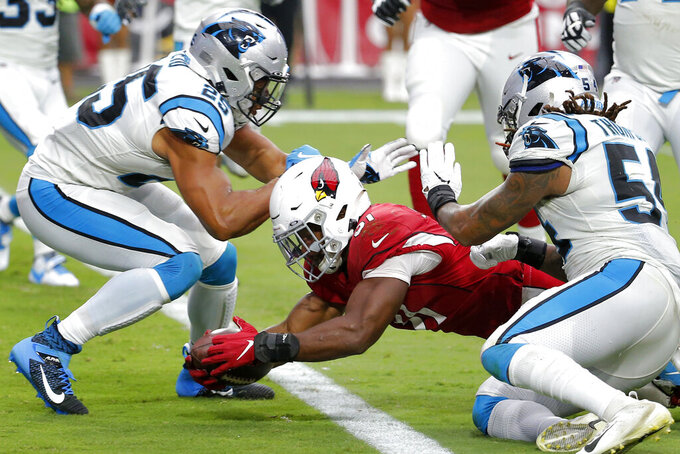 Arizona Cardinals running back David Johnson (31) dives in for the touchdown as Carolina Panthers strong safety Eric Reid (25) and outside linebacker Shaq Thompson (54) defends during the second half of an NFL football game, Sunday, Sept. 22, 2019, in Glendale, Ariz. (AP Photo/Rick Scuteri)

GLENDALE, Ariz. (AP) — Russell Wilson is proof that a mobile quarterback who is slightly undersized by NFL standards can have a long and successful career in the league.

Arizona rookie Kyler Murray would love to follow Wilson's path — especially when it comes to winning.

The Cardinals (0-2-1) are still looking for their first win of the season when they host the Seahawks (2-1) on Sunday at State Farm Stadium. Murray, the No. 1 overall draft pick in April, is just 5-foot-10 but has already shown flashes of potential stardom through three games.

"It was good to see a guy my size doing it. I think that helps any kid," Murray said of watching Wilson. "We kind of have the same stature, so being able to see him do it in the league, winning Super Bowls, that gives you a confidence boost."

Murray and the Cardinals could use another boost of confidence after a discouraging 38-20 loss to Carolina last week. Arizona led 17-14 in the third quarter, but collapsed down the stretch. The Panthers got rolling — especially after a 76-yard touchdown run by Christian McCaffrey — and Murray threw two interceptions while trying to keep up.

Arizona has played from behind for much of the season. Coach Kliff Kingsbury says that's a big reason the running game hasn't been great and Murray has been sacked 16 times.

"He's got to learn, when the party's over, to get rid of it," Kingsbury said. "You appreciate the fact that he wants to make every play and bring us back, but there's no 21-point touchdown passes. It's just a learning curve that we're going through."

Seattle won its first two games of the season before a 33-27 setback to New Orleans last weekend. The 5-11 Wilson has been dominant through three games, throwing for 901 yards, seven touchdowns and no interceptions while completing more than 71 percent of his throws.

Seahawks coach Pete Carroll can certainly see why Murray is compared to Wilson.

"Kyler's a really good ballplayer," Carroll said. "There's no doubt that he belongs, and he's part of it and fits and all that. Maybe had Russell Wilson not come along, it would have been much harder for Kyler to be the first pick in the draft, but I don't know."

Seattle starting running back Chris Carson may not hold his job much longer if he continues to give away the football.

Carson has three lost fumbles in three games, including last Sunday when one was returned for a touchdown by the Saints. It's a tough spot for the Seahawks as Carson personifies how Seattle wants to play offensively and control the game by running the ball. But turnovers are at the top of Carroll's importance list and Carson may not get many more chances, especially if backup Rashaad Penny is healthy after missing last week with a hamstring strain.

For his part, Carroll is remaining supportive.

"You're going to see absolute support for our guy. He's a great football player. We love him. You're going to see what that looks like," Carroll said. "There's been a lot of players over the years, through the ages that have had issues at times. They put it to rest and it's behind them and all that. That's what's going to happen here."

Seattle tight end Will Dissly has already caught three touchdown passes this season. That number might jump against a defense that has struggled to contain that position all season.

Kingsbury said the loss of both starting cornerbacks — Patrick Peterson (suspension) and Robert Alford (injury) — has created a bit of a domino effect in the secondary.

Arizona's Larry Fitzgerald continues to be a very productive option for the team's offense, even at 36 years old.

He has 18 catches through his first three games, giving him 1,321 in his career, and needs five more to pass Hall of Fame tight end Tony Gonzalez for second place behind Jerry Rice with 1,549.

Seattle has bucked the trend by playing base defense more often than not in the first three weeks. That's meant keeping linebacker Mychal Kendricks on the field more often and in only select circumstances adding an extra defensive back. Last week against New Orleans, the Seahawks stayed in their base defense on 73 percent of the plays.

But can they do that against Arizona's pass-happy offense? The Seahawks seem to think so because of the abilities of Kendricks and K.J. Wright to cover running backs and in some cases wide receivers in the slot.

"We can play against anything if we put our mind to it," linebacker Bobby Wagner said. "I think, no matter who we have on the field, base, nickel, whatever you want. We'll be good."

Take away the Super Bowl loss to New England, and trips to Arizona have been mostly successful. Seattle has won five of its past six trips to the desert, with the other game finishing in a 6-6 tie. Of course the games have come with some oddity, too. Kam Chancellor (neck), Richard Sherman (Achilles tendon) and Earl Thomas (leg) all played their final games for the Seahawks in Arizona as each suffered major injuries that ended their last seasons with Seattle, or in the case of Chancellor the final game of his career.