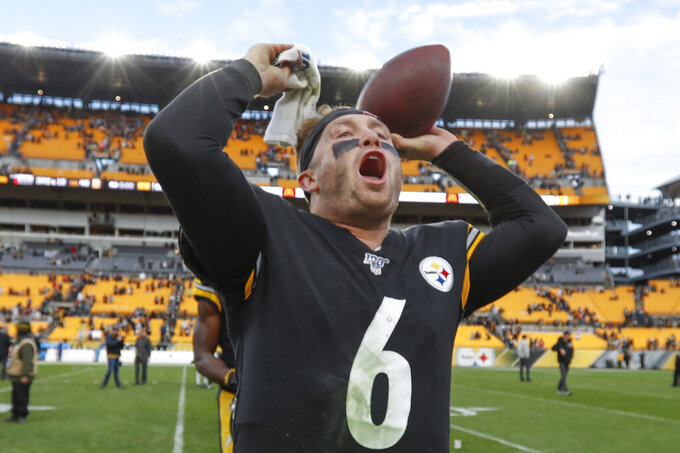 Manning's record of 539 touchdown passes could be broken by both Brady and Brees during the final month of the regular season. Brady has thrown 535 TD passes and Brees has 532.

As for Hodges, he only has three TD passes in two games for the Pittsburgh Steelers. But Hodges became the first undrafted rookie quarterback to win his first two career starts since Rubbert in 1987.

Rubbert won his three starts with the Washington Redskins as a replacement player during a strike. He never played in the NFL after it ended.

That group of six represents the most in a non-strike season in league history. Seven rookie quarterbacks won games in 1987. Detroit's David Blough tries to make it seven this season when the Lions play Minnesota on Sunday.

Lamar Jackson is 23 rushing yards away from becoming the second quarterback in NFL history with a 1,000-yard rushing season, and he needs 63 yards to break Michael Vick's single-season record for quarterbacks. Vick had 1,039 in 2006. Jackson already has the record for most 100-yard games in a season with four. Jackson is a major part of Baltimore's success on the ground. The Ravens lead the league in rushing with 2,494 yards this season.

Sunday's game between the Ravens and Buffalo Bills will feature the most combined rushing yards (1,407) by starting quarterbacks than any contest in league history. Jackson has 977 and Josh Allen has 430.

Ryan Fitzpatrick led the Dolphins to five straight touchdown drives in a 37-31 upset over Philadelphia. The Eagles hadn't allowed more than 225 yards passing in five straight games and held opponents to 17 points or less in four in a row until running into Fitzpatrick.

When the Raiders host the Titans, some of the league's top rookies will be on display. Oakland's Josh Jacobs leads all rookies in yards rushing (1,061), TDs rushing (seven) and scrimmage yards (1,207). Tennessee wide receiver A.J. Brown leads AFC rookies with 626 yards receiving. On defense, Oakland's Maxx Crosby has 7 1/2 sacks.

With one-quarter of the season remaining, 26 teams are still in playoff contention. In the NFC East, the Redskins are still in the race despite a 3-9 record. The Cowboys lead the division at 6-6. Washington needs to win its last four plus have Dallas lose its last four and Philadelphia must go 1-3.