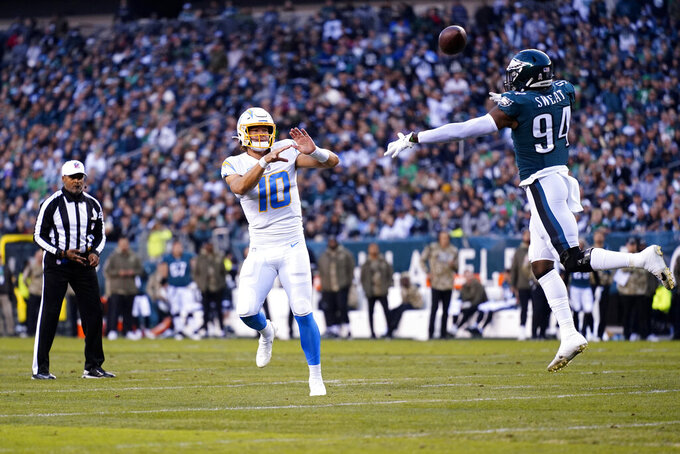 After two wins on the East Coast and four fourth-quarter comebacks, Brandon Staley isn't surprised the Los Angeles Chargers are 5-3 and tied atop the AFC West.

“I think we’ve earned exactly the record that we have right now. Our record is an accurate reflection of where we’re at as a football team,” the first-year coach said on Monday, the day after his squad rallied for a 27-24 victory at Philadelphia.

The Chargers were 2-6 at the midway point last season due to blowing double-digit leads in four games. This season they are winning the close games with their fourth-quarter performances. Los Angeles' 77 points in the final 15 minutes is fifth and the Bolts are averaging a league-best 121 yards.

The tone was set during the Sept. 12 opener in Washington when the defense forced a turnover deep in WFT territory and Justin Herbert connected with Mike Williams for the go-ahead touchdown. Los Angeles also had a nearly six-minute drive at the end of the game with the lead to close it out.

“We've got a quarterback that can get the ball to playmakers, and to be able to come get these wins on the road, it is just showing what type of team we have,” safety Derwin James said.

The win against the Eagles had some of the same traits, including a 15-play, 64-yard drive at the end of the game that led to Dustin Hopkins' winning field goal with 2 seconds remaining.

Herbert is tied for fifth in the league with 18 passing TDs. His 100.6 passer rating in the fourth quarter is third in the AFC, trailing Kansas City's Patrick Mahomes and Buffalo's Josh Allen.

Four of his five career fourth-quarter comeback wins have happened this season.

"None of the games in the NFL are going to be easy. That’s kind of what we figured out the past couple of weeks. To battle through all of that adversity and come out on the other side. I think it’s huge for us,” Herbert said.

Staley has lived up to his pregame promise of being aggressive on fourth-and-short. The Chargers lead the league with 11 successful fourth-down conversions and their 64.7% conversion rate is sixth in the league. They are also second in converting on third-and-long situations (plays with more than six yards to go), making 17 of 45.

The run defense needs major fixes if there are any hopes of sustaining a postseason run. Los Angeles is allowing 161.6 yards per game, 24 yards more than the next lowest team. Opponents are averaging 5.03 yards per carry, the most allowed in franchise history after nine games, and three running backs have 100-yard games. Despite the Chargers not having their usual two starting cornerbacks, Philadelphia ran on 39 of their 57 offensive plays for 176 yards and averaged 4.5 yards per attempt.

Williams is on pace for a career high in receptions and receiving yards. The 2017 first-round draft pick, who is in the final year of his contract, has 37 catches and is eighth in the AFC with 575 yards. Williams was mainly used as a deep threat the past two seasons, but he already has 27 receptions within 10 yards of the line of scrimmage after having 26 all of last season, and 186 yards after catch. Williams has been limited to six receptions in the past three games, but he did have a 49-yard catch against the Eagles to set up a third-quarter touchdown.

Rookie cornerback Asante Samuel Jr. has cooled off after a hot start. The second-round pick was the NFL rookie of the month for September after becoming the first Chargers' player since Andre Young in 1982 to pick off two passes in his first three games, but has struggled in coverage the last three games he has played. He has allowed 10 receptions the last 11 times he was targeted after giving up only 12 receptions in 19 targets in the first four games. Samuel Jr. was also benched during the second half of the Oct. 10 game against Cleveland for poor play.

Cornerback Ryan Smith suffered a torn ACL against the Eagles. Starting right guard Oday Aboushi is out for the season after suffering a knee injury in the Browns game. Right offensive tackle Bryan Bulaga has not played since the first half of the opener due to back issues, and linebacker Kenneth Murray has missed the past four with an ankle problem. Murray has been designated to return and could be back in the lineup for this week's game against Minnesota.

6 — Games when Herbert has had multiple passing TDs and a rushing score, tying Kyler Murray and Cam Newton for the most through a player’s first two seasons in NFL history.

Los Angeles is home the next two weeks but faces challenging opponents in Minnesota and Pittsburgh. The Vikings are 3-5 but have the explosive Dalvin Cook, who is averaging 4.8 yards per carry. The Steelers game figures to have ramifications for the playoff race because the all teams in the AFC North and West are tightly bunched.