Statue of ex-Panthers owner removed from outside stadium 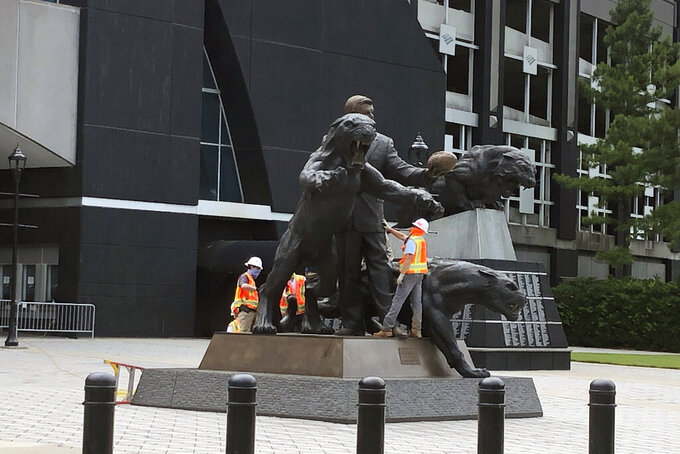 A work crew prepares to remove a statue of former Carolina Panthers owner Jerry Richardson from in front of the team's stadium in Charlotte, N.C., Wednesday, June 10, 2020. “We were aware of the most recent conversation surrounding the Jerry Richardson statue and are concerned there may be attempts to take it down," the team said in a statement. "We are moving the statue in the interest of public safety.” (AP Photo/Steve Reed)

CHARLOTTE, N.C. (AP) — A statue of former Carolina Panthers owner Jerry Richardson, who was accused in 2017 of making sexually suggestive comments to women and a racial slur directed at a black team scout, was lifted from its pedestal outside the team's stadium and taken away Wednesday.

“We were aware of the most recent conversation surrounding the Jerry Richardson statue and are concerned there may be attempts to take it down," a team statement said. "We are moving the statue in the interest of public safety.”

The statement did not elaborate on the information that prompted the removal of the 13-foot (nearly 4-meter) statue, which was originally placed outside the north gate of Bank of America Stadium in 2016 as a gift from team minority partners honoring Richardson's 80th birthday.

A team spokesman would not say if the statue was coming down for good.

Richardson's spokesman, Jim Gray, said in a email to The Associated Press that Richardson has made no public comments about the Panthers or the NFL since the sale of the team and "doesn’t plan to do so now as a private citizen.”

“He has worked to treat all people fairly in his business and personal lives and, like many other Americans, is troubled by recent events in Minneapolis, Charlotte, and around the country,” Gray said.

In December 2017, Richardson announced that he was putting the team up for sale after a Sports Illustrated report, citing unidentified sources, said he made suggestive comments to women and on at least one occasion directed a racial slur at an African American team scout.

The report stated that settlements in the accusations against Richardson came with non-disclosure requirements forbidding the parties from discussing the details. The league also fined Richardson $2.75 million over the misconduct allegations.

Aerial video on Wednesday showed a huge crane lift the statue, which poses Richardson extending a football with his left arm.

The statue was then placed on a flat-bed tractor-trailer parked nearby. Workers covered the statue with tarps and strapped it to the trailer. Two panther statues that flanked Richardson's statue, one prowling and one lunging, also were removed.

There were few onlookers to the operation, but Jehiah White, 24, suggested it was time for it to the statue to be removed.

“There is a lot of progress being made in Charlotte. I’m actually surprised the protesters haven’t gotten to it already. But this means a lot," White said. "We don’t have any room for racist people or misogynist people. ... This means a lot for Charlotte and the United States in general.”

Defensive back Tre Boston said it was in the community's interest that the statue come down.

“And for me, the Carolina Panthers hold ourselves to a standard and we hold ourselves with pride that we do the right things around here,” Boston said on a conference call. "So we thought again it was the best thing for everybody.”

A former Baltimore Colts player, Richardson and his ownership group paid $206 million in 1993 for an expansion team. He had been the team's only owner until David Tepper paid $2.2 billion for the club in 2018. As a condition of the purchase, Tepper said at his introduction as the new owner in July 2018 that he was contractually obligated to leave Richardson's statue in place.

The Panthers began play in 1995 but have never delivered on Richardson’s promise of winning a Super Bowl. They lost after the 2003 and 2015 seasons.

The story his been corrected to show that the statue was placed outside the stadium in 2016, not nearly 25 years ago.