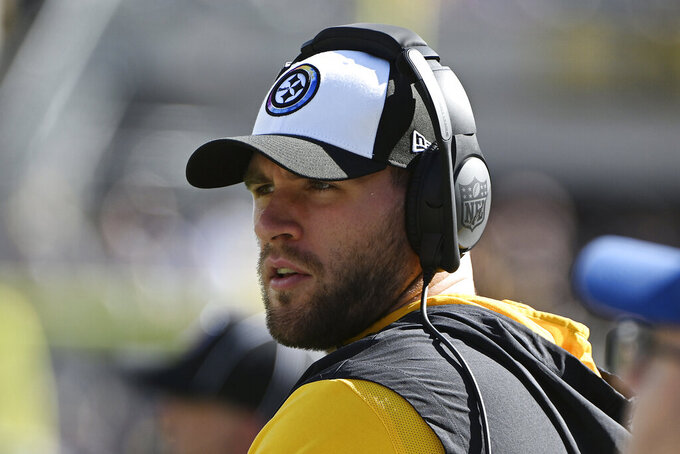 Pittsburgh Steelers linebacker T.J. Watt stands on the sideline during the first half of an NFL football game against the Tampa Bay Buccaneers in Pittsburgh, Sunday, Oct. 16, 2022. (AP Photo/Barry Reeger)

PITTSBURGH (AP) — The Pittsburgh Steelers could get a much-needed jolt as they begin the second half of their season.

Coach Mike Tomlin said Tuesday the team is optimistic that star outside linebacker T.J. Watt will be available for Sunday's visit from New Orleans.

Watt, the NFL's reigning Defensive Player of the Year, has been out since sustaining a left pectoral injury late in regulation of a Week 1 overtime win over Cincinnati. The Steelers have slumped without him and come off their bye week at 2-6, the team's worst record through eight games since 2013.

While Tomlin cautioned there is still “some work ahead of us” for both Watt and safety Damontae Kazee (out all year with a wrist injury) before they are activated off injured reserve, they appear to be ready to go barring a late setback.

“Obviously, those are two veteran players that are NFL capable and obviously going to be positive contributors to our efforts if available,” Tomlin said.

Pittsburgh's pass rush has essentially disappeared during Watt's absence. The Steelers racked up seven sacks in the season opener against the Bengals and have managed all of eight in the seven games since Watt's exit.

Watt, who tied Hall of Famer Michael Strahan's NFL record last season by getting 22 1/2 sacks, should provide a boost as Pittsburgh attempts to emerge from a disappointing first half.

“TJ is who he is,” Tomlin said. “It’s not mystical the things that he’s able to do. I don’t know any of us are surprised with what he’s capable of getting done. We eagerly await his return.”

Watt made an effort to stay closely involved, including wearing a headset on the sideline during games, though Tomlin pointed out that Watt “didn’t make any plays" while serving as the highest-paid volunteer assistant coach in the NFL.

Kazee could also be ready to join a secondary that has essentially been a revolving door through eight games. The Steelers have had 10 players suit up at cornerback or safety, with middling results.

It's one of the reasons they traded for cornerback Will Jackson last week, though Tomlin said Jackson is dealing with a back injury. Jackson saw his time in Washington effectively end when he injured his back earlier this season.

Tomlin called both players “been there, done that guys.”

“I think anytime you get veteran presence, it’s an asset to you,” he said.