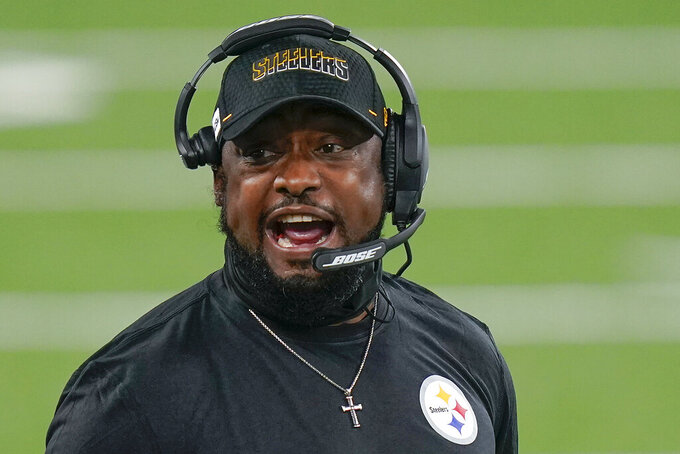 FILE - Pittsburgh Steelers head coach Mike Tomlin talks to players on the sidelines during an NFL football game against the New York Giants in East Rutherford, N.J., in this Monday, Sept. 14, 2020, file photo. The Steelers signed their longtime head coach to a three-year contract extension on Tuesday, April 20, 2021, that runs through the 2024 season. (AP Photo/Seth Wenig, File)

PITTSBURGH (AP) — Mike Tomlin wants to be part of the post-Ben Roethlisberger era in Pittsburgh.

The Steelers on Tuesday signed their longtime coach to a three-year contract extension that runs through the 2024 season.

Tomlin is 145-78-1 in 14 years with the Steelers, winning one Super Bowl and going to another. The franchise has reached the playoffs nine times during Tomlin's tenure and captured its seventh AFC North title under him in 2020.

"I am extremely grateful for this contract extension and want to thank Art Rooney II and everyone in the organization for the support in my first 14 seasons,” Tomlin said in a statement. “We have a goal of winning the organization’s seventh Super Bowl championship, and I couldn’t be more enthusiastic about this upcoming season.”

The Steelers went 12-5 in 2020, winning their first 11 games before stumbling down the stretch, including a blowout loss to Cleveland at home in the first round of the playoffs. The team is in the midst of a mini-overhaul, particularly on offense after two assistants were let go and center Maurkice Pouncey and tight end Vance McDonald retired.

Still, Roethlisberger restructured his contract to lessen his salary cap hit, a move that helped the Steelers free up enough money to persuade wide receiver JuJu Smith-Schuster to return on a one-year deal.

The extension likely means Tomlin will stick around for whatever happens after the 39-year-old Roethlisberger retires. There is no succession plan in place for the future Hall of Famer, though Tomlin opting to sign the extension means he intends to be part of the process whenever Roethlisberger calls it quits.

The agreement deepens Pittsburgh's extraordinary commitment to its head coaches. The Steelers have had just three men in charge since hiring Chuck Noll in 1969: Noll, Bill Cowher and Tomlin. Noll and Cowher are in the Hall of Fame.

The 49-year-old Tomlin already is 21st in NFL history in career wins and is one of just two coaches to begin their career with 14 consecutive non-losing seasons.

“Mike is one of the most successful head coaches in the National Football League,” Rooney, the team president, said in a statement. "We are confident in his leadership to continue to lead our team as we work to win another championship.”

The agreement also gives the Steelers some stability heading into the draft. They have the 24th overall selection and have glaring needs on the offensive line and at running back to bolster a ground game that finished last in the NFL in 2020.

They also need to figure out — at some point — what they're going to do at quarterback. Tomlin and Roethlisberger have formed one of the league's most successful coach-QB tandems in the league during their long run together, though Tomlin pulled off a remarkable coaching trick in 2019 when the Steelers finished 8-8 despite losing Roethlisberger at halftime of Week 2 with a season-ending right elbow injury.

Tomlin is remarkably popular within the locker room, though the team has been only modestly successful in the postseason since last reaching the Super Bowl a decade ago. The Steelers are 3-6 in the playoffs since 2011 and have advanced past the divisional round just once, falling to New England in the 2016 AFC championship game.