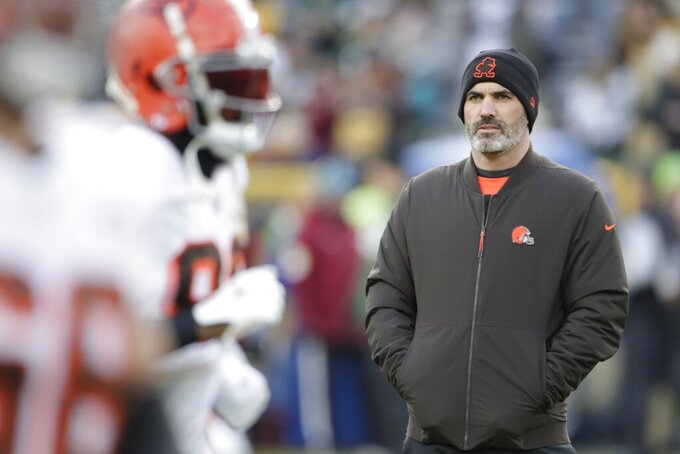 CLEVELAND (AP) — Despite two agonizing losses in six days, a litany of COVID-19 cases and a banged-up starting quarterback who crumbles when the moment calls for strength, the Cleveland Browns still have a chance to make the playoffs.

It's a long shot. But there's a path, a prayer.

In this madcap NFL season, that's either fitting or foolish.

On Monday, Browns coach Kevin Stefanski offered no excuses or regrets for his late-game decisions in Saturday's 24-22 loss to the Green Bay Packers, who sealed the Christmas Day win with 43 seconds left by intercepting Baker Mayfield for the fourth time.

Stefanski left himself open for more scrutiny and deeper criticism for his play calling — a theme all season — on the final possession as the Browns (7-8) let another close game slip away.

Cleveland has lost six games by six points or less this season, an NFL high and a disturbing pattern for the second-year coach and Mayfield, whose toughness is about the only thing in his game not being questioned.

Overcoming Mayfield's mistakes, the Browns were in position to steal a win and sour Green Bay's holiday celebration of Aaron Rodgers breaking Brett Favre's team record for touchdown passes. But as has been the case often in 2021, Cleveland collapsed.

Holding on to three timeouts and with the ball at midfield, Stefanski chose to put it — and the game — in Mayfield's hands instead of giving it to star running back Nick Chubb, who gashed Green Bay for 126 of Cleveland's 219 yards rushing.

Mayfield missed two throws — a second-down screen pass was nearly intercepted — before Packers cornerback Rasul Douglas got away with a tug on Browns receiver Donovan People-Jones' jersey and made his game-sealing pick.

Stefanski said he felt good about the plays he sent in to Mayfield, who hadn't practiced in nearly two weeks due to COVID-19.

“We felt like we were in control there," Stefanski said. "But ultimately, when you do not come through, you second-guess everything. You second guess the first play of the game, the second play of the game or whatever it is. When it doesn't work, we are definitely second-guessing ourselves.”

Stefanski reasoned that he wanted to score a TD or at least move the ball closer so as not to require rookie Chris Naggar to try a long field goal for the win. Naggar was making his NFL debut after being activated from the practice squad a day earlier due to yet another COVID-19 case.

While practical, Stefanski's moves didn't work again as the Browns again failed to execute in the clutch. They're nearly out of time to fix it, but Stefanski is confident he and Mayfield can grow from the latest missed chance.

"For us, again, all of our focus has to just go right back into this week, this game, versus this opponent.”

Down three starters, some key backups and with star end Myles Garrett playing with an injured groin, Cleveland's defense came up big in the second half, holding the Packers to three points.

There were some crucial breakdowns in the red zone, but a pretty solid effort against one of the NFL's best QBs.

The kicking situation remains fluid and flawed. The struggling Chase McLaughlin was placed on the COVID-19 reserve list Friday, elevating Naggar into a difficult spot he made tougher by blowing his first extra point.

The miss prompted Stefanski to go for a 2-point conversion that failed after Cleveland's second TD and altered strategy down the stretch.

M.J. Stewart started at safety for an injured John Johnson III and finished with a team-high 10 tackles, including two for loss. Stewart also made some nice stops in space, preventing the Packers from longer gains.

Stewart, who had 11 tackles in last Monday's loss to Las Vegas, struggled in single coverage against Packers star Davante Adams. But who doesn't?

Mayfield's career-high four interceptions only fueled his many critics, many of whom believe the Browns need to move on from him as their future starter. He's been too inconsistent, too inaccurate and too injured.

The Browns are closer to full strength after activating eight players, including defensive end Jadeveon Clowney and versatile running back Kareem Hunt, from the COVID-19 list on Monday. Starting left tackle Jedrick Wills Jr. is also back. He’s been replaced the last two games by left guard Joel Bitonio, who will slide back to his usual spot.

With some help, the Browns can win their division for the first time since 1989 and make the playoffs for the second year in a row. It’s going to take Cleveland winning against Pittsburgh and Cincinnati, the first-place Bengals first losing to Kansas City and the Baltimore Ravens dropping one of their last two games.