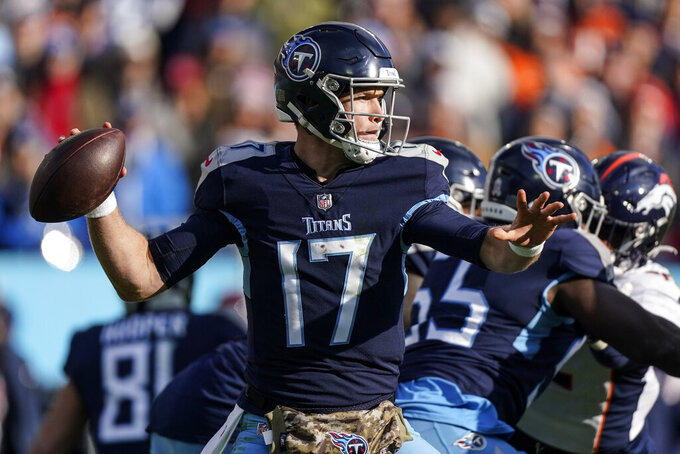 Tennessee Titans quarterback Ryan Tannehill (17) works in the pocket against the Denver Broncos during the second half of an NFL football game, Sunday, Nov. 13, 2022, in Nashville, Tenn. (AP Photo/Mark Humphrey) 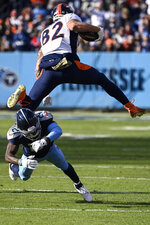 Turns out an aching Tannehill and a patchwork defense were more than enough against the struggling Denver Broncos.

Tannehill returned after missing the last two games with a sprained ankle by throwing two touchdown passes to Nick Westbrook-Ikhine as the Titans rallied from a 10-point deficit to beat the Broncos 17-10 on Sunday.

“Everything feels a little better when you win," said Tannehill, who spoke to reporters still wearing his uniform in a postgame time-saving move with more treatment ahead on his ankle and a game Thursday night at Green Bay.

The Titans (6-3) won for the sixth time in seven games. Tannehill appeared rusty early as the Titans fell behind 10-0 in the second quarter and were trailing 208-53 in total yards shortly before halftime.

Denver came in rested off a bye, not that it helped as the Broncos (3-6) now have lost five of six.

“It’s another close game, another one-score game,” first-year Denver coach Nathaniel Hackett said of the Broncos' five losses by a combined 21 points. “We feel like the defense stepped up to the challenge with Derrick Henry. I mean, the offense has to find a way.”

The Broncos had plenty of chances but couldn’t score after halftime. Russell Wilson had a final chance to tie the game, but his pass on fourth-and-8 from the Titans 25 was tipped and picked off by Terrance Mitchell with 11 seconds left.

“Man, it’s definitely frustrating,” Wilson said. “I feel like we could have won that game.”

Tannehill and the Titans got going late in the second quarter.

The quarterback accounted for 70 yards on a drive capped with a 9-yard TD pass to Westbrook-Ikhine to pull within 10-7. In the third quarter, Titans used a flea-flicker with Henry tossing the ball back to Tannehill, who found Westbrook-Ikhine wide open down the right sideline for a go-ahead 63-yard TD.

Undrafted in 2020 out of Indiana, Westbrook-Ikhine had a career-high 119 yards receiving. He also had his first career two-TD game after not having a TD catch this season. Tannehill finished with 255 yards passing.

“It was great to see him back,” Westbrook-Ikhine said.

The Titans played without five defensive starters, including lineman Jeffery Simmons, a 2021 Pro Bowler, safety Amani Hooker and outside linebacker Bud Dupree. Cornerback Kristian Fulton was scratched pregame with an injured hamstring. They lost three other defenders to injuries during the game.

Tennessee still sacked Wilson six times with Rashad Weaver and DeMarcus Walker having 1 1/2 sacks each. The veteran QB, whose first season with Denver since being acquired in a trade from Seattle has been disastrous, went 21-of-42 for 286 yards, one touchdown and the late pick.

“Anytime guys like Jeff or Bud aren’t out there, those guys that change the game, impact players, you want to go out there and do the same thing," Weaver said. “Not only to step up, but to make those guys proud.”

Denver scratched safety Justin Simmons because of the knee he hurt two weeks ago in the Broncos' win over Jacksonville in London, and P.J. Locke made his first NFL start. Linebacker Baron Browning also was scratched.

Wilson got the Broncos across midfield for the first time midway through the second quarter when he found Jalen Virgil on the left sideline for a short pass the undrafted rookie from Appalachian State took 66 yards for the TD on his first NFL catch.

The Broncos added a 39-yard field goal by Brandon McManus.

Denver wide receiver Jerry Jeudy, who missed seven games last season with a high ankle sprain, was lost on the first offensive play after apparently tangling his feet with Titans defensive back Andrew Adams. Jeudy immediately grabbed at his left ankle, limped to the sideline and was carted to the locker room.

Broncos right tackle Billy Turner hurt a knee in the second quarter and did not return. Center Graham Glasgow, starting in place of the injured Lloyd Cushenberry III, hurt a shoulder late in the third. He was replaced by rookie Luke Wattenberg, who had played one snap previously.

Titans defensive back Lonnie Johnson hurt a hamstring on punt coverage and was carted to the locker room. Cornerback Elijah Molden, activated off injured reserve Saturday, hurt a groin, while cornerback Caleb Farley left with an injured back.

AND THE KICKER TOO

Tennessee's Randy Bullock kicked a 35-yard field goal and two extra points despite dealing with an unspecified injury or issue shortly before kickoff. Bullock had one kickoff that went just 47 yards, so rookie punter Ryan Stonehouse handled kickoffs in the second half with two touchbacks.

How much concern did that create? “A (expletive) ton,” coach Mike Vrabel said.