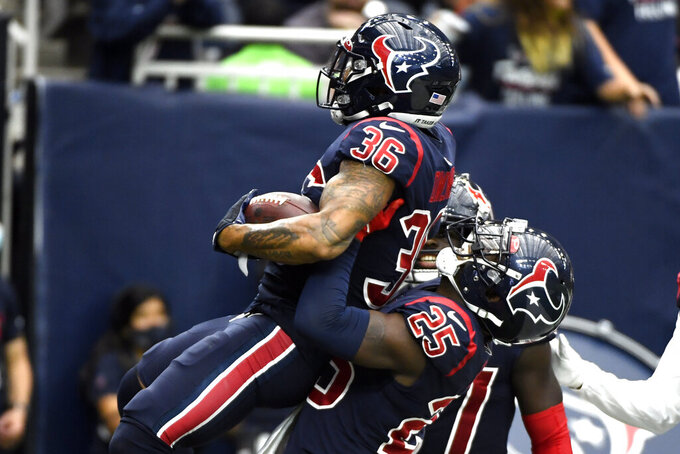 Houston Texans' Jonathan Owens (36) is lifted up by Desmond King II (25) after recovering a fumble by the Los Angeles Chargers during the second half of an NFL football game Sunday, Dec. 26, 2021, in Houston. (AP Photo/Justin Rex)

HOUSTON (AP) — After a loss to the lowly Houston Texans on Sunday, Los Angeles Chargers coach Brandon Staley was quick to remind his players they still have plenty to play for.

“This is the tough side of the NFL," Staley said. “It’s been a fight this entire season for us. It’s going to continue to be that way. We still have a lot in front of us."

Rex Burkhead ran for a career-high 149 yards and two touchdowns, and the Texans took advantage of three turnovers to beat the Chargers 41-29 with both teams missing more than a dozen players because COVID-19 protocols.

The Chargers' playoff chances took a serious blow with the loss. Outside linebacker Joey Bosa, running back Austin Ekeler, receiver Mike Williams and center Corey Linsley were among the major contributors on the COVID-19 list for LA (8-7), which entered in second place in the AFC West.

Coach David Culley was impressed with the players who filled in for the missing starters.

“Those guys came in and they showed that they were ready to do what we needed to get done," he said. “This team is so resilient. They’ve never really worried about what happens on the outside, all we’ve tried to do is just get better."

Burkhead had TD runs of 25 yards and 1 yard as the Texans, who entered the game ranked last in yards rushing, ran for a season-high 189 yards. Rookie Davis Mills threw for 254 yards and two touchdowns.

“We played our most complete football game," Culley said.

The Chargers' Justin Herbert threw for 336 yards with a garbage-time touchdown and two interceptions. Justin Jackson ran for 64 yards and two touchdowns and had 98 yards receiving filling in for Ekeler, but his fourth-quarter fumble led to a Houston field goal that hurt LA's comeback bid.

On the Chargers’ next possession, Jackson scored on a 9-yard run and Herbert connected with Jared Cook on the 2-point conversion to get the Chargers within 27-23.

But Mills hit Nico Collins for a 13-yard touchdown with less than three minutes left to extend Houston’s lead to 34-23. Tavierre Thomas effectively ended with a pick-6 for 48 yards with just under two minutes to go.

Staley took responsibility for the loss, which came after last week's overtime defeat to Kansas City.

“I didn’t coach well enough," he said. “I didn’t put our guys in a good enough positions to be consistent in the game, and that’s why we lost."

Three plays later, DeMarcus Walker stripped the ball from Jackson and the ball was recovered by Jonathan Owens, who also created another turnover late in the second quarter that helped Houston take the lead for good. Owens picked off Herbert at the goal line with about four minutes left in the first half.

Owens' girlfriend, Olympic gold medal-winning gymnast Simone Biles, attended the game and was seen on the in-stadium video board clapping and cheering after the interception.

The Texans cashed in on the miscue with a 94-yard drive capped by Mills' 41-yard touchdown pass to Chris Conley for a 17-12 lead at halftime.

Dominik Eberle, signed this week with Fairbairn on the COVID-19 list, made his first NFL field goal on the first attempt of his career — a 51-yarder that cut LA's lead to 12-10 in the second quarter. He finished 2 for 3 on field-goal attempts.

Dustin Hopkins connected on field goals of 50, 46 and 35 yards for the Chargers.

FAMOUS FACE IN THE CROWD

Along with Biles, the sparse crowd included another celebrity as rapper 50 Cent sat by Texans owner Cal McNair, his wife Hannah and former Houston star receiver Andre Johnson. The New York rapper, who moved to Houston earlier this year, got a loud ovation when he was shown on the video board during a timeout.