Through ups and downs, Patriots still atop AFC East 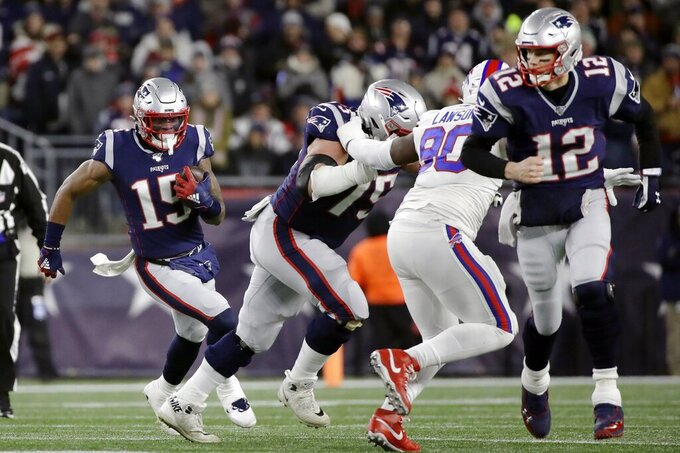 New England Patriots wide receiver N'Keal Harry, left, runs with the ball as quarterback Tom Brady, right, runs ahead to block in the first half of an NFL football game against the Buffalo Bills, Saturday, Dec. 21, 2019, in Foxborough, Mass. (AP Photo/Elise Amendola)

It's a wonder the New England Patriots bothered to put them on at all.

The defending Super Bowl champions clinched their 11th consecutive AFC East championship with a 24-17 victory over the Buffalo Bills on Saturday, giving them a day to watch the rest of the NFL's playoff picture sort itself out.

With one game to play in the regular season, the Patriots (12-3) are on track for the No. 2 seed in the conference playoffs. A victory over Miami (4-11) in the finale on Sunday, would clinch a first-round bye, as would a Kansas City (11-4) loss to the Los Angeles Chargers (5-10).

That would mean a 10th straight first-round bye for Tom Brady and Bill Belichick.

It's been a decade since the Patriots have faced a real challenge in the division, but this year's Bills came into the Week 16 game still clinging to a chance to dethrone them. It's been even longer, though, since winning the AFC East was enough to satisfy Brady, Belichick and the local fans.

“It’s a great step for us,” Brady said. “And hopefully we can build on it and go play great next week.”

With Sunday's victory by the Ravens, the Patriots were eliminated from contention for the No. 1 seed in the AFC. New England would only fall to the No. 3 seed and have to play in the wild-card round if it loses to the Dolphins and the Chiefs beat the Chargers. (Kansas City holds the tiebreaker over the Patriots by virtue of their 23-16 victory in Week 14.)

Brady and the Patriots offense had struggled the previous eight games. He snapped a string of nine straight games with a passer rating below 100 and five straight weeks with completing less than 55% of his passes — both the longest of his career. Against Buffalo, he threw for 271 yards and a TD for a rating of 111, completing 26 of 33 passes (79%).

The key may have been a balanced attack: New England had 35 runs and 33 passes; 10 first downs on the ground and 11 by air; and scored one rushing TD and one passing.

“We’ve all seen Tom play a lot of his best football in the most critical games of the year, in the most critical situations in those games," coach Bill Belichick said. “He was on the money; he was sharp. That’s what we need from everybody this time of year. We’ve got to play like this every week or our season is going to end quickly.”

The concussion protocol. Julian Edelman remained motionless on the turf early in the second half after colliding head-first with Bills safety Jordan Poyer's gut. Only after penalty flags came flying in did the Patriots receiver arise. If spotters suspected a concussion, he should have been removed immediately, but he remained in the game until after the Patriots kicked a field goal. Then he was taken off for testing and missed about a quarter of the game

Afterward, Edelman said that he only stayed down to try to draw a penalty flag on Poyer, so he didn't need to come off at all.

RB Rex Burkhead had the ball punched free after catching a pass on the Patriots opening drive, but offensive coordinator Josh McDaniel went back to him on the second play of the next possession. Burkhead set a career high for receiving yards, catching four passes for 77 yards. He also had 20 yards rushing, including a 1-yard run for the go-ahead score.

Brady as a downfield blocker. The 42-year-old six-time Super Bowl champion was the lead blocker for receiver N'Keal Harry on a reverse. Brady actually did a good job of clearing out Tre'Davious White, as Harry picked up 18 yards. But it may not be a risk the Patriots want to take too often.

“I’m pretty poor at just about everything other than throwing the ball,” Brady said. “So, I was trying to just get in his way. But, it was a good, hard run by N’Keal.”

17: The number of AFC East titles for Brady in his 18 years as the starter, including 11 in a row. The second-most for a quarterback was Peyton Manning, with 12.

The Dolphins (4-11) are coming off an overtime victory over the Cincinnati Bengals. In other circumstances, Belichick would use this game to rest up his starters for the playoffs. But a loss to Miami could force the Patriots into the wild-card round.