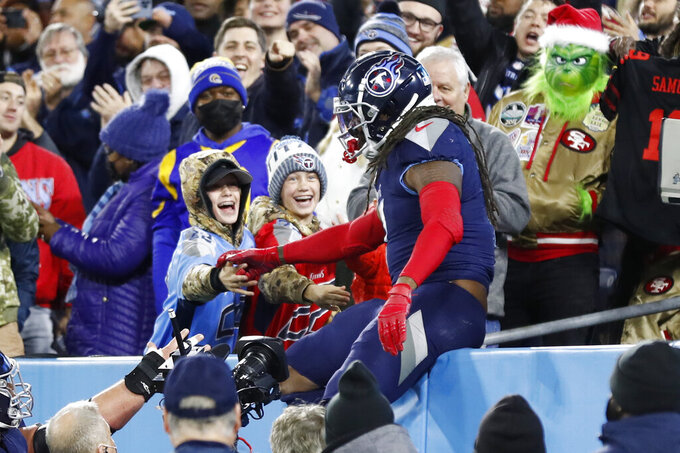 Tennessee Titans running back D'Onta Foreman celebrates after scoring a touchdown against the San Francisco 49ers in the second half of an NFL football game Thursday, Dec. 23, 2021, in Nashville, Tenn. (AP Photo/Wade Payne)

This franchise hasn't strung together division titles since the dawn of the AFL in 1960 when the then-Houston Oilers won the Eastern Division for the first three seasons.

The Titans also would clinch a third straight playoff berth, something this team has done only once before during the Oilers' “Run & Shoot” days.

The Titans (10-5) are so close they can taste it with a road game in Houston remaining.

“You know we’re starving,” Titans defensive lineman Teair Tart said. “We’re trying to just claw at it any way we can. ... Everybody is hungry as possible to lock the division up.”

The Dolphins (8-7) are the NFL's first team ever to lose seven consecutive games, then reel off seven straight victories to revive their playoff hopes. Their latest came Monday night with a 20-3 win in New Orleans, and now they have another road trip on a short week. Veteran linebacker Elandon Roberts said the Dolphins are only focused on the Titans.

This could be a playoff preview with the Titans currently holding the AFC's No. 2 seed and Miami in the third and final wild-card spot with a trio of teams at 8-7 ready to pounce. Tennessee still has a chance at the No. 1 seed and the first-round bye if Kansas City (10-5) slips.

The Titans are healing up after not having the left half of their offensive line in last week's 20-17 comeback victory over the 49ers. They've also won two of three.

“It’s in our hands, and we can control it,” left guard Rodger Saffold said.

If Titans quarterback Ryan Tannehill beats the team that drafted him with the eighth pick overall in 2012 on Sunday, he will become the franchise's winningest quarterback in his first three seasons with the team. He is tied with George Blanda (1960-62) with 28 regular-season wins.

This will be only the third game since October with the Dolphins facing a team that will enter the matchup with a better record than Miami. Baltimore was 6-2 when it faced 2-7 Miami on Nov. 11, and Carolina was 5-6 when it met the 4-7 Dolphins on Nov. 28.

The Titans rank 10th with 37 sacks and are one of only two NFL teams with three players having at least 7 1/2 sacks each.

Miami leads the NFL with 45 sacks, and 33 of those have come in this winning streak. That's four off the team record of 49 last tied in 2005. Keeping Tannehill upright has been a problem for Tennessee with a revolving door of injuries on its offensive line. Only Cincinnati's Joe Burrow (47) has been sacked more than Tannehill (45) this season.

The previous time these teams met was Titans coach Mike Vrabel's debut, and it wound up the longest game in NFL history at 7 hours, 8 minutes because of two weather delays on a steamy day Sept. 9, 2018, in Miami Gardens. A cold front will be dropping the temps from the 70s on Saturday to freezing by kickoff Sunday.

“Put some thermals on, put a hoodie on and get out there," Miami coach Brian Flores said.