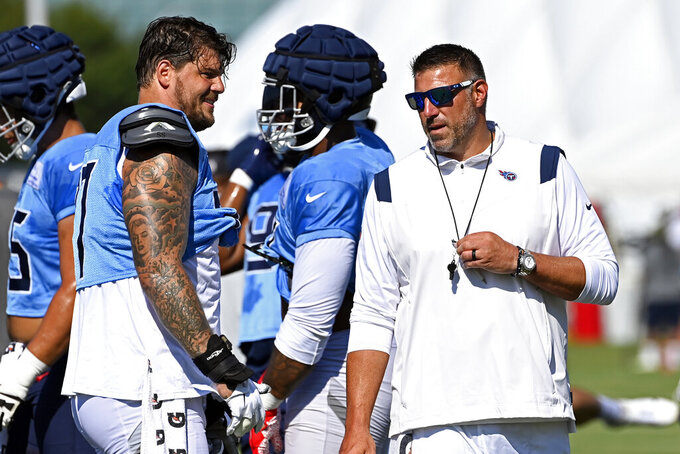 Strengths: The Titans return 10 of 11 starters from a defense that ranked sixth in scoring last season and tied for ninth in sacks with 43. They were the only NFL team with three players with at least eight sacks apiece, and Harold Landry, Denico Autry and Jeffery Simmons all are back. Plus, OLB Bud Dupree finally has recovered from the ACL injury that slowed him in 2021.

Weaknesses: Ryan Tannehill was sacked 47 times last season, second most in the NFL, and the Titans are replacing Saffold at LG and will have a new RT possibly in rookie Petit-Frere, a third-round pick out of Ohio State. Tannehill's favorite target since becoming the Titans' starter in October 2019 now is in Philadelphia with Brown traded during the NFL draft.

Camp Development: The longest-tenured player on the roster is fighting for his job. Three-time Pro Bowl punter Brett Kern is working to hold off rookie Ryan Stonehouse who has consistent hangtime close to 5 seconds on each of his punts. Philips also has earned a roster spot as a fifth-round pick out of UCLA with his consistent route-running and skill at punt returner.

Fantasy Player To Watch: Hooper. The former two-time Pro Bowl tight end has built a quick chemistry with Tannehill and gives the Titans the true No. 1 tight end they lacked last season.

Expectations: The Titans have put together the second-longest active streak of consecutive winning seasons at six, trailing only Kansas City's nine straight seasons. They also have won back-to-back AFC South titles reaching the playoffs the past three seasons. The Titans earned the AFC's No. 1 seed with the franchise's best record since 2008 despite using an NFL-record 91 players because of injuries, the most ever in a non-strike season. Winning a third straight division title is the goal for the chance to make up for losing a divisional game on their own field last January. The health of Derrick Henry's surgically repaired right foot will determine how long this current window stays open.