Titans' newest kicker ready to leave Double Doink in past 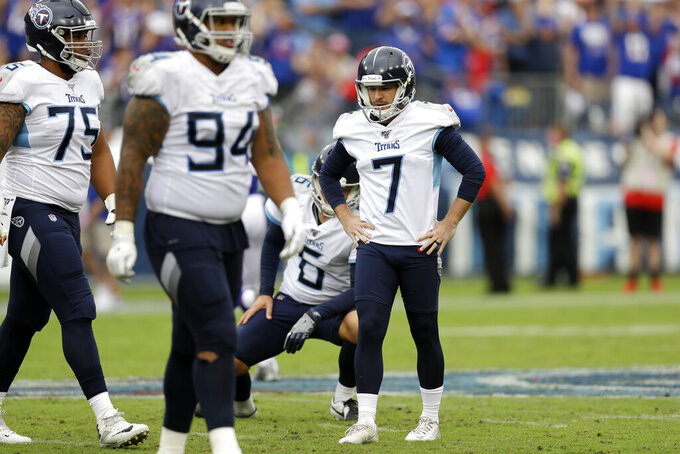 NASHVILLE, Tenn. (AP) — Tennessee's Cody Parkey is back in the NFL and ready to kick again.

He wants to keep memories of 2018 — especially his missed field goal attempt with Chicago now commonly known as the Double Doink — in the past.

The Titans (2-3) signed Parkey on Tuesday after releasing Cairo Santos on Monday, a day after he missed three field goals and had a fourth blocked in a 14-7 loss to Buffalo. The Titans originally signed Santos on Sept. 4 after working out both Parkey and Santos. Now Parkey has the job for at least the next three games until veteran Ryan Succop is eligible to be activated off injured reserve.

Coach Mike Vrabel said both kickers were really close in that original workout for Tennessee, with each making every kicked asked of them.

"In the end, you have to make decisions so we've moved on now here to Cody, and we'll get started with that here today," Vrabel said.

Santos at least had been in a training camp with Tampa Bay before being released at preseason's end. He went 4 of 9 with the Titans on field goals, though he did connect on all 12 extra points.

Parkey has been working out on his own at home in Jupiter, Florida, since the Chicago Bears released him in late February despite having signed the kicker to a four-year contract before the 2018 season. Parkey was 23 of 30 on field goals during the regular season, the third-lowest conversion rate in the NFL, and he was 42 of 45 on extra points.

Six of his misses clanked off uprights, including his 43-yard attempt in the final seconds of Chicago's wild-card loss to Philadelphia at Soldier Field. Parkey made the field goal that didn't count because of a timeout. Then his kick hit the left upright before bouncing off the crossbar no good.

Asked what he learned from how last season ended, Parkey said perseverance.

"Not everything's going to go your way, so it's about how you respond and how you get back to it," said Parkey, 27. "Never stay defeated and continue to put your best foot forward."

If he was surprised at what happened in Chicago, he isn't saying — at least not these now.

The kicker out of Auburn has connected on 83.9 percent of field goals (99 of 118) in his career, and the Titans now become his fifth team since joining Philadelphia in 2014. He's also played for Cleveland, Miami and Chicago. Parkey is 149 of 156 (95.5 percent) on extra points for his career.

Parkey said he tried out for some NFL teams in recent weeks. While waiting for a call, he worked on his fundamentals.

Now he has to get up to speed with holder/punter Brett Kern and long snapper Beau Brinkley by kickoff Sunday in Denver (1-4). The Broncos who lead the NFL with five blocks since the start of the 2018 season, and Dre'Mont Jones blocked a 48-yard field goal just last week in Denver's win against the Chargers.

The kicker who is 7 of 9 on field goals 50 yards or longer says his confidence is as high as ever since coming into the NFL, and now Parkey finally has a chance to bounce back from that miss on his last field goal attempt months ago.