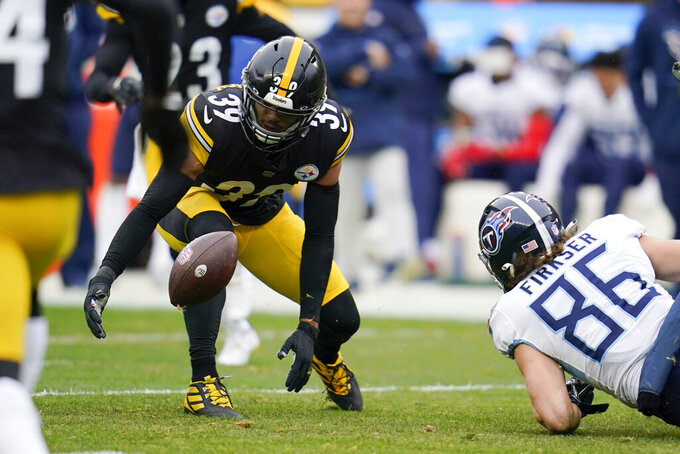 NASHVILLE, Tenn. (AP) — The Tennessee Titans had the AFC's No. 1 seed in their hands once again along with a chance to move a win away from clinching their second straight AFC South title.

They literally fumbled it away.

Now they sit in the AFC's No. 3 spot with their lead inside the division over Indianapolis (8-6) trimmed with three games remaining. The Titans (9-5) also face a quick turnaround hosting San Francisco (8-6) on Thursday night, with the 49ers a 3 1/2-point favorite according to FanDuel Sportsbook.

Not the Titans. They have lost three of four with a combined 13 turnovers over that span, and they blew a 10-point halftime lead Sunday against Pittsburgh with four more turnovers in a 19-13 loss.

“To me, it comes down to taking care of the football. I mean Captain Obvious," Vrabel said. “But you know, that’s really what it is.”

Luckily, the Titans are at home for their next two games, where they are 5-2 this season.

The defense more than did its part. All four turnovers came on the Tennessee side of the 50, and the Titans held Pittsburgh to four field goals despite two drives getting inside their 20. They held Pittsburgh to 168 total yards and just 2 of 11 on third downs in what should have been a smothering performance good enough for a win.

“We ain’t going to bend,” Titans linebacker Bud Dupree said. “We won’t break. We have to keep going. That’s what it is. No matter where it’s at we have to have that mentality.”

The offense. The Titans can put together long drives, and held the ball for more than 39 minutes against Pittsburgh. But the turnovers killed the chance to pad the lead, which wasn't as big as it should have been because of the Titans' continuing struggles in the red one.

They held the ball for 10:17 in the second quarter and settled for a field goal after driving to the Pittsburgh 8, and a second field goal after getting to the Steelers 14 in the third quarter. Unfortunately, they turned over the ball three times in the span of 10 snaps and didn't score again.

Wide receiver A.J. Brown is eligible to be activated from injured reserve for Thursday night's game and was designated Monday to start practicing again. His return would be a big boost to Ryan Tannehill. He threw for 153 yards and didn't complete a pass longer than 18 yards against Pittsburgh.

Chester Rogers. The slippery punt returner ranks third in the NFL averaging 10.5 yards per return, and he had his best of the season with a 55-yard return in the first quarter to set up Tennessee's lone touchdown.

Tannehill. The quarterback has been forced to carry the offense with Derrick Henry on injured reserve since Nov. 1, but he now has as many interceptions (14) as touchdown passes (14) this season. He was responsible for the final two turnovers in the fourth quarter with an interception off a tipped pass and a fumbled snap in a span of three offensive plays.

Wide receiver Julio Jones. He was just activated off injured reserve Dec. 11 from a hamstring injury that has bothered him all season. Targeted only once, Jones snapped his streak of consecutive games with at least one catch at 134. He didn't return after halftime with a hamstring issue.

The Titans also designated defensive back Chris Jackson to start practicing Monday in his potential return from injured reserve.

25 — The number of turnovers the Titans have had this season after having only 12 all of 2020.

The Titans' finishing stretch looks much more challenging with their own turnover issues. San Francisco has won four of its last five to climb above .500, while Miami has won six straight to get to .500. Even a season-ending trip to Houston is no gimme after the Texans won in Nashville in November.