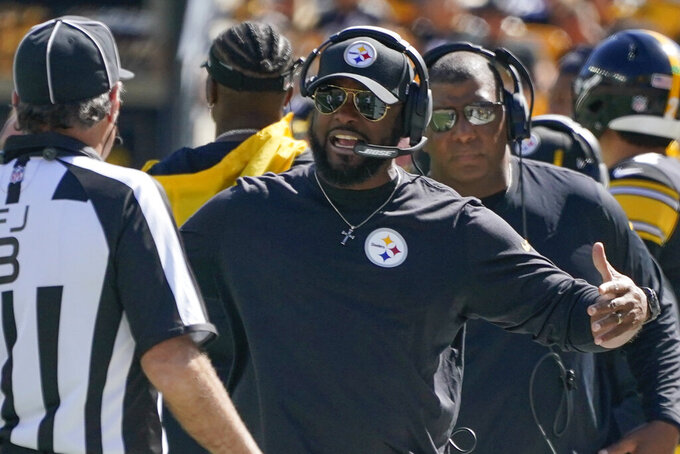 PITTSBURGH (AP) — Mike Tomlin's got plenty of ideas on how to fix the Pittsburgh Steelers. Increasing Ben Roethlisberger's practice workload is not one of them.

Even with the offense sputtering behind a young and at times overmatched line and the team off to an ugly 1-2 start, Tomlin said Tuesday there are no plans to have Roethlisberger deviate from his usual routine heading into a visit on Sunday to Green Bay (1-2).

The 39-year-old Roethlisberger typically doesn't practice on Wednesdays during the regular season, an accommodation he's received for the better part of the past decade. That's not going to change even with Pittsburgh 28th in scoring, 32nd in rushing and — perhaps most importantly — in last place in the AFC North.

“It rests him and rightfully so,” Tomlin said. “He’s an older guy and the wear and tear of plays affects him differently than younger guys. But also he’s an older guy and he has a volume of plays that most guys can’t pull from that probably requires (them) more physical work and an effort to be ready to play.”

Roethlisberger jokingly acknowledged “everything hurts” in the aftermath of a 24-10 loss to Cincinnati on Sunday in which he was sacked four times, hit several others and threw a pair of interceptions in Pittsburgh territory.

Tomlin is not concerned about Roethlisberger's health, saying the 18-year veteran is dealing with the normal “bumps and bruises” associated with the game, though those bruises are piling up quickly. Roethlisberger has already been sacked eight times in three games. He was dropped 13 times in 15 starts last season when the Steelers captured the AFC North title.

There are a combination of factors leading to the uptick, namely a line featuring four new starters, including a pair of rookies. While Tomlin is optimistic the group will improve, he allowed there is plenty to work on.

All five linemen were penalized at least once against the Bengals, though he stressed he is not planning to make any changes based on performance, though right tackle Chuks Okorafor's status is uncertain after he went into the concussion protocol in the third quarter against Cincinnati.

Even if exactly where that compass is pointing remains unclear as September closes. Rookie running back Najee Harris set a franchise record by catching 14 passes on Sunday, maybe because that's the only way to get him in space. He's found little to room when getting a handoff from Roethlisberger, mostly because there's nowhere to go.

Harris lost four games in four years while starring at Alabama and never endured an actual losing streak. He admitted Sunday the previous time he was on a team that dropped two straight might have been in high school.

“Welcome to the bigs,” Tomlin said, laughing. “You know, my sons didn’t lose a lot of high school football games either. They feel a little differently about the competition now that they play college ball. It’s just the nature of this thing.”

Even if it's a little unnatural for the Steelers to find themselves at the bottom of the division. Pittsburgh is below .500 three games in for the first time since 2013, when the Steelers opened 0-4 before rallying to 8-8. Tomlin stressed he's more intent on living in the present than using the past to find comfort. Pittsburgh hasn't played well. He hasn't coached well. There's plenty of time — more than ever now that the season has been stretched to 17 games — but things need to get better quickly, and he knows it.

“I’m excited about (improving) with the collection of men we work with,” he said. “We’ve got to have tough skin.”

NOTES: LBs T.J. Watt and Alex Highsmith, who both missed the loss to Cincinnati because of groin injuries, are scheduled to practice on Wednesday. ... WR Diontae Johnson (knee) is also expected to practice after sitting out Sunday. ... The team cut LB Jamir Jones Tuesday and promoted LB Derrek Tuszka to the 53-man roster.