Trubisky shines as Bills roll past Bears with 41-15 win 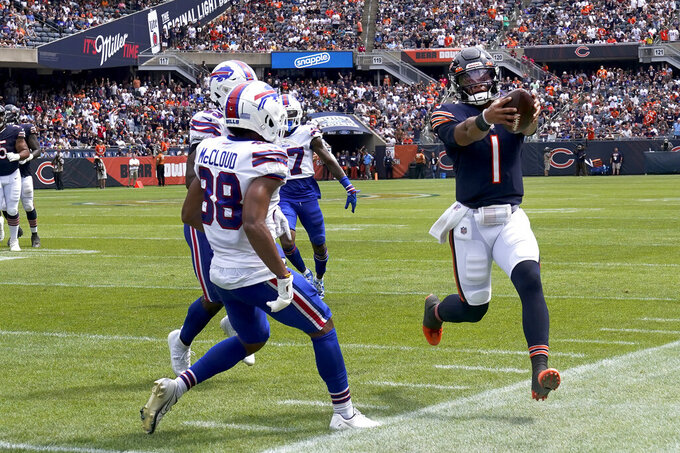 Chicago Bears quarterback Justin Fields (1) heads out of bounds for a first down during the second half of an NFL preseason football game against the Buffalo Bills Saturday, Aug. 21, 2021, in Chicago. (AP Photo/Nam Y. Huh) 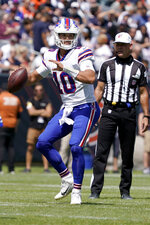 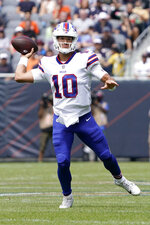 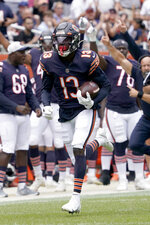 CHICAGO (AP) — Even if it was a preseason game, Buffalo quarterback Mitchell Trubisky gained possibly a small measure of satisfaction at Soldier Field on Saturday.

Trubisky led the Bills on four touchdown drives in their first four possessions against his former team in a 41-15 preseason victory over the Bears.

“It felt good to do it against these guys, but I’m also rooting for a lot of those guys on the other side and they’re still like family to me,” Trubisky said.

Greeted by Chicago fans with a mix of both boos and cheers, Trubisky finished 20 of 28 for 221 yards with a touchdown and played the entire first half. He led six scoring drives in all and the Bills (2-0) went into the locker room leading 34-6.

“I knew people would be talking about it and hyping it up, but it was just important for me to come out here and do my job and show my teammates that I could play well,” Trubisky said.

Trubisky’s TD pass in the first half was a 4-yarder rolling right to Jake Kumerow. The Bills also had a 14-yard TD run by Devin Singletary and two 1-yard TD runs by fullback Reggie Gilliam in the first half and tacked on a 79-yard punt return for a TD by Marquez Stevenson in the third quarter.

Chicago GM Ryan Pace made Trubisky the second pick of the 2017 draft and he guided their offense during two playoff games in the past three years.

However, the Bears (1-1) decided not to pick up Trubisky’s fifth-year contract option and let him leave in free agency after the 2020 season.

“I think I stopped being anxious about three or four days ago and I just felt really comfortable with the game plan, what all we were doing out there and my teammates had my back all week,” Trubisky said.

Chicago moved on to sign quarterback Andy Dalton in free agency and selected Justin Fields 11th overall in the draft.

On Saturday, Dalton threw a 73-yard TD pass to Rodney Adams, but also threw an interception to Nick McCloud just before halftime to give the Bills a chance at Tyler Bass’ 41-yard field goal. Bass also added a 33-yarder.

Dalton finished 11 of 17 for 146 yards with a TD and interception. He played the entire first half.

Trubisky met up with some old friends from the Bears prior to the game on the field, then came out and directed TD drives of 72, 64, 53 and 34 yards on the first four Bills possessions. Buffalo had 19 first-half first downs to just four by the Bears.

Wide receiver Isaiah McKenzie was a valuable option for Trubisky, as he hauled in seven receptions for 72 yards in the first half.

McKenzie saw extensive time because of the absence of Stefon Diggs, who has had knee soreness and did not play.

“We know what Isaiah can do,” Trubisky said. “He makes those types of plays in practice, a super shifty guy. He makes a great run after the catch. He made huge plays for us today.”

Buffalo went to Jake Fromm at quarterback in the third quarter.

There’s no doubt who Bears fans want as the starting quarterback. They were clamoring for Fields to play by the start of the second quarter as their team fell behind.

The first four drives Dalton led this preseason failed to gain a first down.

Dalton and the first-team offense were serenaded with boos when they came onto the field early in the second quarter and Fields’ entrance on the first Bears drive of the third quarter was greeted with wild applause.

“Of course, they have to realize Andy is a human being, too,” Fields said.

Fields appreciated the support, but called it disrespectful.

“That’s not helping Andy,” Fields said. “My advice to them would be just to cheer for who’s out there playing on the field.”

Bears linebacker Roquan Smith did not play after returning to practice last week following two weeks away with a groin injury.

Chicago is at Tennessee on Aug. 28.