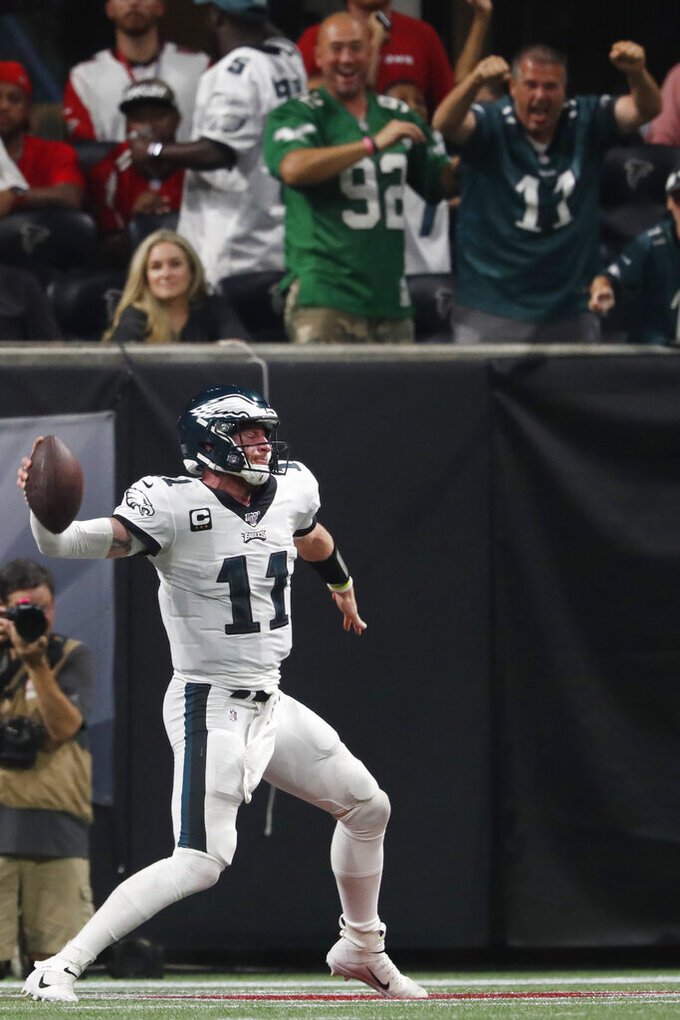 Philadelphia Eagles quarterback Carson Wentz (11) spikes the ball after a touchdown against the Atlanta Falcons during the second half of an NFL football game, Sunday, Sept. 15, 2019, in Atlanta. (AP Photo/John Bazemore)

PHILADELPHIA (AP) — Missing three of their top five receivers, the Philadelphia Eagles were simply undermanned against the Atlanta Falcons.

Wentz overcame early struggles and a couple poor throws, absorbed several hits and watched a perfectly thrown pass slip through Nelson Agholor's fingers instead of going for a go-ahead 60-yard touchdown with under two minutes left in a 24-20 loss.

He connected with Agholor for 43 yards on fourth-and-14 later in the drive, but his last pass on fourth down to Zach Ertz was a half-yard short at the Falcons 9.

Now the Eagles (1-1) have to get ready for the Detroit Lions (1-0-1) with uncertainty surrounding their receiving corps.

DeSean Jackson played only 11 snaps before a groin injury sent him to the sideline, and Alshon Jeffery played only six before a calf injury took him out. Tight end Dallas Goedert didn't play because of a calf injury.

That forced the Eagles to use rookie J.J. Arcega-Whiteside and reserve Mack Hollins at the receiver spots along with Agholor, and tight end Ertz played every snap.

Coach Doug Pederson had to scrap his plan to use two tight ends in several formations and altered his play calling.

"If you were to look at my call sheet this morning, you would see a lot of scratch outs on plays and different things," Pederson said Monday. "If you watch the game as we did this morning, Zach is telling guys where to go. Nelly is telling... we're moving guys. Our pieces are moving and we're putting guys in positions that didn't practice in those positions during the week and still had a chance at the end of the game. Took the lead and had a chance."

The Eagles are having success converting third downs on offense. They were 9 of 18 against the Falcons and are 20 of 35 (57.1 percent) through two games. They were 2 of 3 on fourth downs in Atlanta and are 3 of 5 overall.

The defense couldn't generate much pressure on Matt Ryan, forcing defensive coordinator Jim Schwartz to blitz far more than he usually does. The only sack came on a safety blitz, and another blitz forced an interception, but Ryan saw it coming late in the game and tossed a 54-yard TD pass to Julio Jones for the winning score.

Jordan Howard averaged a team-high 7.3 yards per carry, finishing with 44 yards. He also reached down to make a nice grab on one of his two catches for 11 yards. Howard ran hard, was tough to bring down, and could see an increased workload.

Cornerback Ronald Darby got beaten for two TDs and two more could've been scores except Ryan overthrew open receivers. Darby had an interception in the third quarter, too. He's playing 10 months after tearing the ACL in his right knee.

Defensive tackle Tim Jernigan suffered a foot injury that's considered more serious than the injuries to Jeffery, Jackson and Goedert. The Eagles already lost defensive tackle Malik Jackson, a key signing in free agency, to a season-ending foot injury last week. Running back Corey Clement has a shoulder injury that forced him out of Sunday's game.

2.5 — Rookie running back Miles Sanders has a team-high 21 carries for only 53 yards, an average of 2.5 yards per attempt. He appears to be looking to run outside the tackles and isn't finding the open holes in the middle quickly enough.

The Eagles return home to face the Lions, who are coming off a 13-10 upset win over the Los Angeles Chargers. Philadelphia is an early favorite by a touchdown and can't get caught looking ahead to a Thursday night game at Green Bay.